Fake news. Alternative facts. We've all grown familiar with, and perhaps a big inured to, such phrases of late.

Spinning language is something politicians have done for, well, forever. And it's not limited to just news.

At tax time we hear a lot of things, especially on the internet, that we hope will help us make wise decisions when we file our taxes. But some of it is wrong.

To fight this trend of alternative, fake tax facts, as well as brighten up your day a bit, I thought you might enjoy this brief tax facts video. 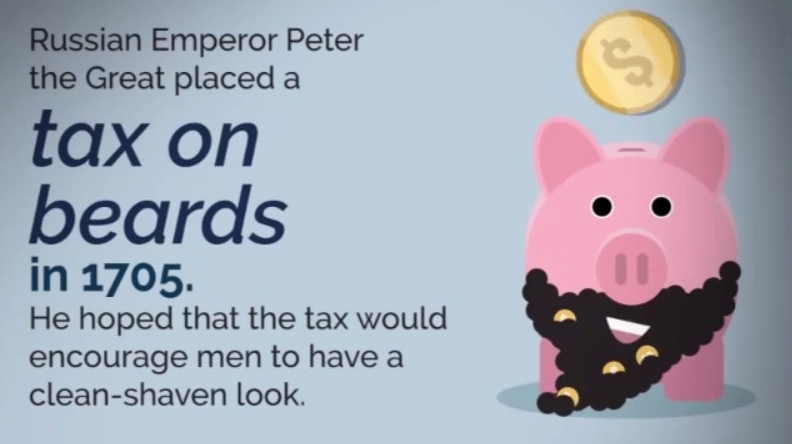 That beard tax tidbit might terrify today's hipsters, but it's also a good example of how so-called Pigovian taxes have always been used to modify, or at least try to shape, our behavior.

Nowadays we have sin taxes on cigarettes and alcohol in part to discourage those habits. Similar taxes have been tried with less success on high-fat foods and sugary beverages.

Fake, and real, tax facts: You'd think all the real but odd taxes would be enough, but as Tax Day nears, folks also find themselves inundated with just plain wrong tax advice.

Last year some Twitter users have decided to use this unfortunate situation for fun, filling their feeds with #FakeTaxFacts. Here are some of my favorites, paired with some real tax facts on the same subject.

Ah, yes, dependents. Be they minor children or others who could qualify as a dependent, including an aging parent, all can provide tax savings.

First, they provide you an added exemption, which is excellent since that's an immediate dollar amount subtracted from your adjusted gross income. For 2016 returns, each exemption is worth $4,050; low inflation keeps it at that level for 2017.

But, and it's an important one, a spouse is never, ever a taxpayer's dependent. Each husband and wife do count as exemptions. That, however, is as far as it goes. No matter how co-dependent y'all are on each other -- emotionally, physically or financially -- it doesn't transfer to dependent status on your tax return.

Yes, millions of us count our pets as furry family members. The Internal Revenue Service, however, does not. Your cat, dog, rabbit, snake or whatever critter you've adopted does not count as a tax dependent.

There are, however, some situations where an animal can provide some tax breaks.

Generally, this is when a pet works, such as a guide dog or service animal. But there are some other tax-saving situations, such as reducing hobby costs, adding to charitable donation deductions and reducing the cost of moving your family to a new home.

I love how Guapo mashed up one of the oldest Internet scams with taxes, which have their own special cons.

In all cases involving messages from unknown sources, beware of promises that seem too good to be true, whether the offer is a surprising windfall or more cash back from the IRS.

As for taxes, be on alert for email phishing scams and telephone calls from fake IRS agents looking to verify your return information or collect on an unpaid tax bill, or from an agency like the Taxpayer Advocacy Panel that you know was created to help you solve your tax troubles.

Don't immediately presume the emails or calls are real. Check them out and if you find they're a scam, ignore the demands or offers and let the IRS know of the attempted con.

The worst of these scam are compiled each year in the Internal Revenue Service's annual Dirty Dozen list, the 2017 version of which was just finalized last week.

Filing your tax return early does have a lot of benefits.

First, it gets your taxes out of the way. Second, if you're getting a refund, you'll get it sooner. And third, it helps you beat tax crooks who are looking to use your personal data to the filing punch.

But sorry, filing early will not get you extra tax refund money.

On the other hand, though, don't worry if you're a late-season filer.

It's a myth that filing on Tax Day or getting an extension will make your return more susceptible to tax audit. Not filing at all or forgetting to get an extension, however, will.

There are so many fake stories circulating about when you'll get your tax cash that the IRS this year busted 5 refund myths that too many folks thought were true.

OK, there's not really much fun about tax filing other than getting it done.

So you want to make sure that when you do file, either by April 18 or by Oct. 16 if you get an extension, that you only have to do it once.

Sure, you can amend a return if you later find an error; that option is good for up to three years after the return's original due date. But it's always better if you get your 1040 correct the first time.

Be sure you don't make any avoidable tax filing mistakes or overlook any tax breaks for which you qualify.

The ol' blog's Daily Tax Tips -- all real! -- also can help. They're collected on special monthly blog pages. January's tax tips list is complete and February's is well underway, with this item joining page today, Feb. 21, 2017. When March arrives and through this year's April filing deadline, more tips will be posted each weekday.

While filing isn't necessarily fun, the fact that most of us have to take care of this tax task isn't fake.

This 2017 tax filing checklist can make it more tolerable, if not entirely enjoyable. Even if you don't technically have to send Uncle Sam a 1040, doing so could pay off for some folks.

And these, my friends, are just the real, not fake, tax facts.