We're still waiting for Donald Trump, the front-runner for the Republican presidential nomination, to release any of his personal tax returns.

It's not a campaign requirement, but it is a tradition that we, the voting public and media, have come to expect. Failure, or resistance, to do so tends to make us suspect that the White House wannabe is hiding something.

The Donald's excuse, recently reinforced by a letter from a pair of is attorneys, is that his personal tax filings are under Internal Revenue Service audit. When that's done, says Trump, he'll make the 1040s public.

But another candidate also is holding out when it comes to personal tax transparency. 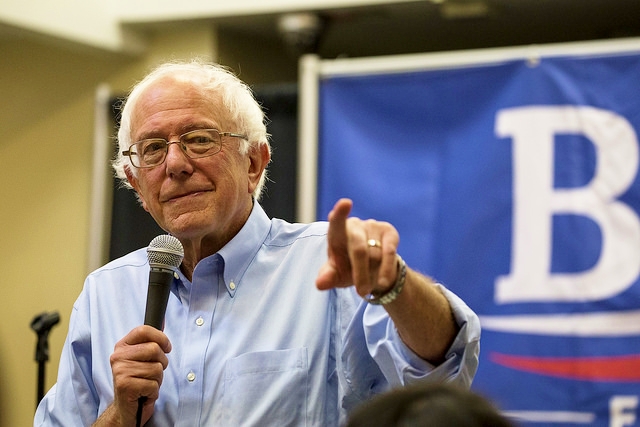 Bernie Sanders, the Vermont Independent who's challenging his former U.S. Senate colleague Hillary Clinton for the Democratic nomination, has not opened up his tax life to the voters.

Bernie's explanation excuse? His wife does their returns and she's been busy.

Real or political reasons? I'm a wife who does our joint returns and I'm also busy. Maybe not as busy as the spouse of a campaigning presidential candidate, but my professional focus does ramp up during tax season and I've got a good idea right now of where our current taxes stand.

I could send in our federal Form 1040 and its associated forms on April 18. I probably won't because, as in past years, I like that by getting an extension I have more time to contribute to my self-employed retirement plan.

Heck, even Mitt Romney, the last notable potential president return holdout, released back in 2012 an estimated version of his tax return to get the press et al off his back.

And putting the onus on Jane Sanders applies only to this year's filing. What about previous years that cover his Senate tenure?

Sanders so far has released just one federal return, his joint filing for the 2014 tax year. And here he's in the same limited openness category as the other two GOP candidates, Ted Cruz and John Kasich.

In all three cases, these White House wannabes have made public just their 1040 forms without offering any of the document's supporting tax data.

A Form 1040 is something, but it's far from giving voters a full look at the candidates' taxes. We see only the filer's gross income, adjusted gross income, itemized deduction amounts (but no details as to what they claimed to arrive at the number) and ultimate tax liability.

Same populist song, different tax verses: A lot of political analysis are comparing the political anger that Trump and Sanders have sparked this election year as opposite sides of the same populist coin.

Their similarities also extend to their unwillingness to be open about their personal tax filings.

And as much as I hate saying this, I've got to give Trump more benefit of doubt when it comes to revealing what's on his tax returns.

While making them public technically shouldn't affect the IRS examination, every tax pro I've talked to said they'd advise their clients under audit, as Trump apparently is, to be as discreet as possible -- yeah, I know, using Trump and discreet in the same sentence is totally weird -- until the process is complete.

Bernie, however, doesn't appear to have any such legal fallback for his disclosure delay. Just his wife's time-management inefficiency.

"In 2014, he reported an adjusted gross income of $205,271, most of it from his Senate salary," writes Pulitzer Prize winning tax journalist David Cay Johnston in a recent The National Memo article about Sanders tax secretiveness.  Johnston finds Sanders' itemized deductions, "totaling $56,377, a whopping 27.4 percent of his income," of particular interest.

To be fair, Johnston has the same concerns about the limited Cruz and Kasich 1040-only releases.

Clinton's tax openness: And speaking of Clinton, the one thing you never hear is just how forthcoming the former Secretary of State has been about her personal taxes.

Clinton, early in her campaign, made public her and former President Bill Clinton's joint income tax returns, going back to tax year 2000. The available-for-inspection 1040s also include at key attachments, such as Schedule A itemized deductions, Schedule B interest and dividend income details, capital gains transactions and self-employment earnings.

This level of personal tax transparency is singular during the current presidential campaign. And it comes from the one candidate who is continually pummeled by her opponents and many media outlets as being untrustworthy. Go figure.

Clinton's willingness to be the only presidential hopeful to more completely open up her tax life earns her kudos.

It also qualifies 1 as this week's By the Numbers honoree.

If you want to see what the presidential candidates have made public in connection with their filings, you can check out their various campaign websites. A shortcut also is available for those 1040s etc., as well as filings of other politicians, at the Tax History Project.