One man hopes Hillary Clinton's drive for the White House will help him sell her former ride. 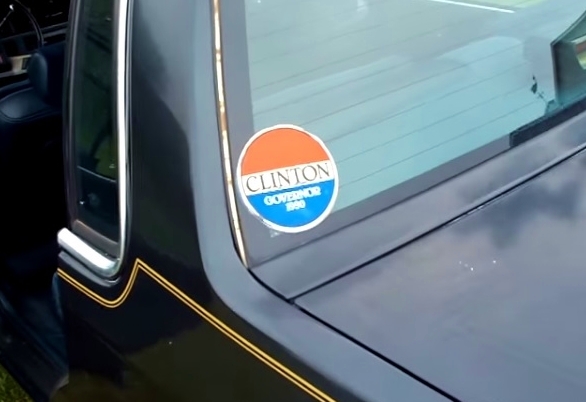 Hillary Clinton's old Oldsmobile, pictured here in a screen shot from a YouTube video made in a 2011 attempt to sell the vehicle, is being offered once again to buyer. Click image to watch the full video.

Mike Lawn of Gettysburg, Pennsylvania, worked for the National Parks Service -- he just had to have that job, right, with that surname -- in Washington, D.C., for 29 years, helping with White House landscaping during the terms of seven presidents, including Hillary's husband.

Lawn was the Parks Service's head gardener in 2000 when the Clintons, getting ready to vacate D.C. after Bill's eight years in the Oval Office, decided to get rid of the car via a bidding process.

White House pedigree: The 1986 Oldsmobile Cutlass only had 30,000 miles on it, having sat mostly unused on the south lawn of the White House during the Clinton Administration, according to a story in Gettysburg's The Evening Sun newspaper and a YouTube video made when the Olds was offered for sale back in 2011.

Aside: No "up on cement blocks" jokes, please, but I'd love to hear from anyone who has pictures of the Olds at 1600 Pennsylvania Avenue.

Lawn got the car, of which Hillary was the registered owner.  Her Hillary Rodham Clinton signature is on the bill of sale.

Now he's looking to unload the old Olds, which still has its Arkansas license plate and a 1990 "Clinton for Governor" sticker on the back windshield.

Lawn told the newspaper that he bought the auto for his daughter as a 16th birthday gift. He intended for the young woman to drive the Cutlass to school, but she was unimpressed.

The Lawns, however, might want the sale to take a few more months. The Cutlass might go for a higher price if Hillary gets to move back into the White House, this time as the 45th president.

Donating instead: A lot of folks sell vehicles they no longer use. It's a relatively easy way to pocket some spending money.

However, as I've blogged before, I don't want the hassle of dealing with potential buyers. So the one time we didn't trade in our old car for new one, we gave it to Goodwill.

Back then, it was easier to claim an auto donation as an itemized tax deduction. It's a bit more work now, since the Internal Revenue Service changed the deduction rules years ago to make it harder for folks to claim inflated values for the automotive charitable gifts. A story I wrote on auto donations details the current donation/deduction rules.

If you have an old auto just taking up space in your garage or yard and you won't get much for it, consider giving it to your favorite charity. Many will accept them. I hear almost every time I tune in to Austin's local PBS radio station (KUT-FM) a promo urging listeners to give their old autos to the station.

You'll feel good about helping an IRS-qualified nonprofit. Your charity will get a vehicle it can use to provide services or sell for operational money.

And you could get a tax deduction next filing season.