The presidential candidates are duking it out for their parties' nomination, with things heating up on both the Democratic and Republican sides as the hopefuls look to New York's primary.

So far The Donald and Cruz and Hillary and Bernie haven't gone head-to-head over their tax plans. A couple of publications, however, are facing off, over ways to calculate what we'd pay under their various tax proposals. 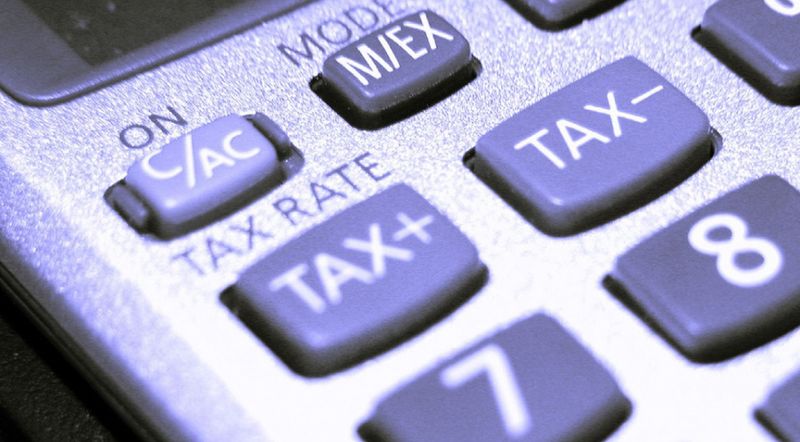 Figures don't lie, but…: Last month, Vox published a candidates' tax calculator that it created in conjunction with the Tax Policy Center (TPC). The folks at Vox and TPC made it clear that their calculator was a basic one just to give folks an idea of where they'd come out under the candidates' tax proposals.

Now, however, The Nation is taking issue with that calculator, calling it "wildly misleading" and offering one of its own.

According to The Nation, the Vox/TPC calculator:

...does not show how your overall economic situation might change under each candidate's policy agenda. What it presents is a number Vox calls "your tax liability," which includes things you would never think of as part of your tax bill — like the payroll taxes your employer pays on your wage or the tax you pay on a bottle of wine. Using Vox’s approach, which draws on a narrow, but largely correct, analysis from the Tax Policy Center (TPC), simply getting a raise from your boss would look like a larger tax bill — bad news.

That means, says The Nation, the Vox/TPC calculator "overwhelmingly favors Trump and Cruz, while suggesting that Sanders’s plan would have a negative effect on disposable income for the majority of Americans."

Taxing and spending: Vox notes that because of myriad personal tax situations, its calculator's process was simplified to "consider only the biggest factors (income, marital status, and children) and only look at the four taxes with the largest impact (individual and corporate income taxes, payroll taxes, and excise taxes)."

The Nation argues that you can't count taxing without also counting spending. "Taxes, in other words, don’t exist in a vacuum," write Mark Paul, David Rosnick and Emily Stephens for the magazine. "What the government does with those taxes matters quite a bit."

The Nation article cites Citizens for Tax Justice data showing that under Bernie Sanders’ proposals, which tend to come out worse on the basic tax hike-vs.-increase calculation, will not only see their take-home pay increase, but also will spend less of it on things like prescriptions and student loans.

Under Hillary Clinton, things will stay largely the same, according to The Nation. Meanwhile, Donald Trump and Ted Cruz plans tend to provide individuals with more money but also will require them to spend more of it to cover government programs they plan to cut.

The Nation article details how it tweaked its candidate tax plan calculator to account for what it sees as deficiencies in the Vox/TPC online program.

Tax calculations, take 2: I tried out The Nation's calculator using the same scenario as I did with the Vox/TPC one.

My result: The trends were essentially the same, but Sanders' tax bite is greatly reduced under The Nation's computation scheme.

Here's The Nation's calculator result for a married, jointly filing couple with no children and income of $150,000: 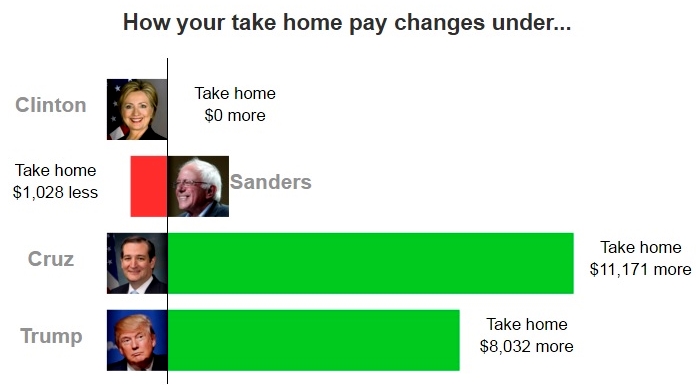 And here are the projected tax bills for that couple using the Vox/TPC calculator: 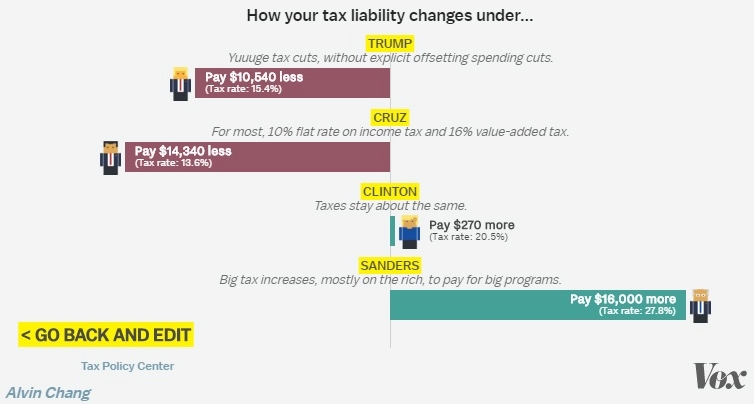 I can see the value of both methodologies.

The Vox/TPC gives you an idea of where you'll stand from a purely tax rate standpoint.

I suggest you run your own numbers in both calculators. Then decide which candidates' tax and government policies fit your political philosophies and finances.

Nation calculator is weird because it says the poor will get health care savings they already have. If you're making $15,000, depending on your state, you often qualify for Medicaid through ACA--free health care--or pay less than $400/year through ACA. So you're not getting the benefits that the Nation calculator says you'll get. They only allow you to put that you get your health care through "employer" or "other" but not through ACA and its rates. Some of the excise taxes on gasoline I don't necessarily think are accurately applied to each income bracket by the taxpolicycenter.org calculator on VOX. But when it comes to the POOR-enough-for-Medicaid-or-almost-free-health-care, the Nation calculator seems to whitewash the fact that their effective taxes are increased to a huge chunk of their meagre income to help the wealthier classes get the new benefit of free health care.

Also, Sanders connects 3/4 of college aid to taxes on financial transactions, so the Nation factoring in the benefit of free education (to people who may or not use it), is a little rough, given that Sanders is trying to sell us on the idea that people's income-based taxes have not much to do with that benefit.