Home Table of Contents Tax Tips Credits Deductions Refunds State Taxes Politics/Laws Tax Terms Archives
Which 2016 presidential candidate will cut your tax bill?
Tax help in finding new work, or what to do differently from Jimmy McGill if you don't like your job

"Millions flee Georgia for the safety of North Carolina's bathrooms," quipped New Yorker columnist Andy Borowitz after the Tar Heel State's governor signed into a law a measure that, among other things, revokes local protections for lesbian, gay, bisexual and transgender (LGBT) people. 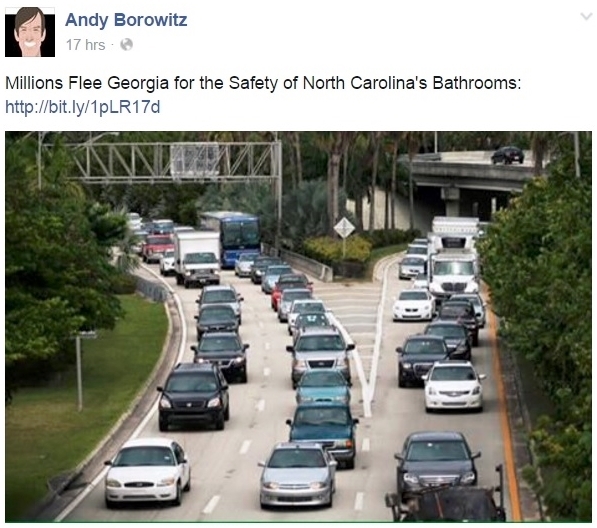 The part of the bill that's gotten most attention is, as Borowitz notes, the one that requires transgender people to use the bathroom corresponding with the gender they were born with rather than the one they identify with.

North Carolina is the first state to require this. Last year, Houston, Texas, passed a similar law for facilities within its boundaries.

Principles vs. economics: It's Borowitz's job to be funny and he daily applies his particular brand of satire/sarcasm to the craziness that is today's world.

But to many people of all sexual orientations, the North Carolina law, which effectively prevents cities and counties in the state from passing their own laws protecting LGBT rights, is far from a joke and more than just a human and civil rights issue.

Critics of the law promise threaten say that it could have real economic impact.

They point to a study that Indianapolis' convention and tourism board that found Indiana lost at least $60 million in revenue after that state last year passed its Religious Freedom Restoration Act. That fiscal hit came even though Indiana quickly enacted a fix to the law clarifying that it cannot be used to discriminate based on sexual orientation and gender identity.

The potential loss of business (and the associated tax dollars of the companies and their employees) obviously didn't persuade North Carolina's lawmakers.

A similar threat, however, did work (as Borowitz noted) in Georgia.

You can see more of the businesses, local and national, that opposed the law at Georgia Prospers.

The NFL also warned that enactment of the law might affect the league's consideration of the Atlanta Falcon's stadium to host Super Bowls. Atlanta is one of four finalist cities for the professional football league's 2019 and 2020 championship games.

Willing to sacrifice tax breaks: Then there's the entertainment industry.

Georgia has benefited enormously from film and TV production, thanks in large part to the lower labor costs and the state's generous tax credits. The Peach State has seen dramatic growth in the film industry, from $132.5 million in 2007 to $1.7 billion in 2015.

But that multibillion dollar mutual relationship could have been seriously damaged if Georgia Gov. Nathan Deal, a Republican, hadn't decided to veto the bill.

Disney and Marvel had made it clear that that if the Free Exercise Protection Act became law, they would leave.  Marvel's "Guardians of the Galaxy 2" currently is shooting at Pinewood Studios outside Atlanta. "Captain America: Civil War" was shot there last summer.

AMC Networks, which makes "The Walking Dead" in Georgia, issued a statement opposing the legislation: "As a company, AMC Networks believes that discrimination of any kind is reprehensible. We applaud Governor Deal's leadership in resisting a previous version of this divisive legislation and urge him to reject the current version as well."

Impressive trade-off: I'm surprised and impressed that the suits in the entertainment industry chose human rights over their ledgers' bottom lines.

A cynic, which I usually am, might say the film and television folks knew their combined opposition would sway the Georgia governor so there never really was any risk that the studios would lose tax breaks and incur costs of relocating productions.

But nothing is ever sure.

So good for those companies for taking a stand. And good for Georgia's top lawmaker for listening.

It will be interesting to see if North Carolina faces a substantial financial and political backlash. If so, lawmakers there might get their hearing checked and revisit their oppressive and embarrassing law.

The transgender bathroom situation is unnecessarily controversial. No one is going to arrest someone who clearly looks like a woman from going into a women's restroom. If a person is truly transgender and identifies as a woman or man and looks to be that gender then there should be no complaint by anyone in the bathroom. The problem starts when people who aren't transitioning and are clearly the opposite gender enter the bathroom. This can be awkward and cause problems because of small girls or boys being in the same restroom as a fully grown adult of the opposite gender(even though they identify as the same gender). This is frightening for parents because now anyone can claim to be transgender and walk right into the bathroom that they don't belong in. It is especially taxing when sexual crimes are involved. This has always been a moral issue for me personally and I can't really decide on where I stand but, I know why there is a law against it.