As millions of us are still working on our current tax returns, the Internal Revenue Service and its in-house watchdog the National Taxpayer Advocate's office are debating the future of the agency and how that will affect us and our filings in coming years.

The IRS is working on what it calls its Future State plan, an outline of agency activities in five years and beyond. One of the plan's central components is online taxpayer accounts. These accounts, says the IRS, will substantially reduce the number of telephone calls and visits it receives every year from filers. 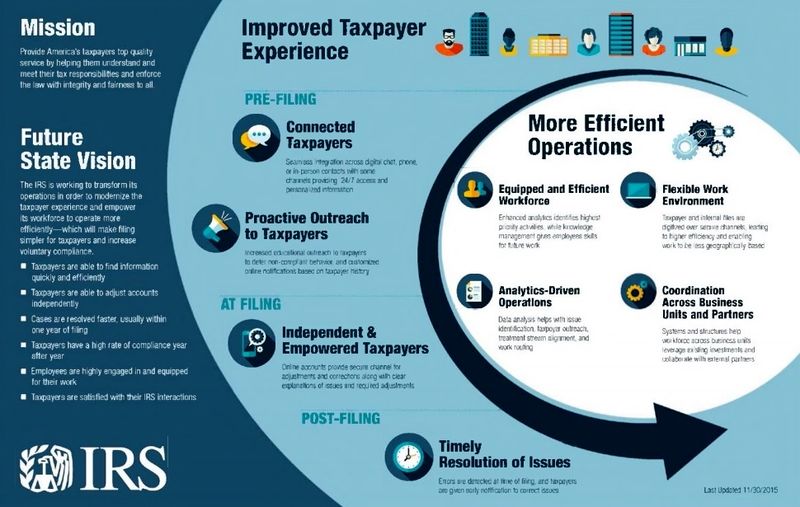 The IRS says its Future State vision focuses on an improved taxpayer experience throughout the tax life cycle, efficient IRS operations and an improved employee experience.

Online ubiquity, bottom-line savings: Part of the reason for turning to more taxpayer self-sufficiency is that in general we are becoming more accustomed to using online services in all aspects of our lives. Heck, even my 81-year-old mother started getting her credit card bill via email after her snail mailed paper statement was not delivered for two straight months.

But the real reason for the change is money. IRS Commissioner John Koskinen, during a February appearance before the Senate Finance Committee, said:

"Within our tight budget constraints, the IRS has also continued to analyze and develop plans for improving how the agency can fulfill its mission in the future, especially in delivering service to taxpayers and, along with that, maintaining a robust compliance program. … We need to be, and are, looking forward to a new, improved way of doing business that involves a more robust online taxpayer experience. This is driven, in part, by business imperatives; when it costs between $40 and $60 to interact with a taxpayer in person, and less than $1 to interact online, we must reexamine how we provide the best possible taxpayer experience, in response to taxpayer expectations and demands. …

Even with the improvements we have made and continue to make, we are at the point where we believe the taxpayer experience needs to be taken to a new level. Our goal is to increase the availability and quality of self-service interactions, which will give taxpayers confidence in knowing they can take care of their tax obligations in a fast, secure, and consistent manner. The idea is that taxpayers would have an account at the IRS where they, or their preparers, could log in securely, get all the information about their account, and interact with the IRS as needed. Most things that taxpayers need to do to fulfill their obligations could be done virtually, and there would be much less need for in-person help, either by waiting in line at an IRS assistance center or calling the IRS."

Of course, the IRS will never be fully automated. "We recognize there will always be taxpayers who do not have access to the digital economy, or who simply prefer not to conduct their transactions with the IRS online," Koskinen told the Senate panel.

Worries about a less-personal IRS: Still, it's heading that way. And that has National Taxpayer Advocate Nina Olson worried.

She's expressed her concerns about increasing IRS service automation in recent reports to Congress. She's also taking the topic to the masses, holding a series of public forums on taxpayer service.

The first gathering was Feb. 23 in Washington, D.C. The next will be March 9 in Glen Ellyn, Illinois, followed by another in the Bronx, New York, on March 18. On the list for possible future forums are Portland, Oregon; Harrisburg, Pennsylvania; and Cleveland, Ohio. Just a quick personal thought: I'd love to see a Southwestern U.S. site added to the hearings mix.

Olson's biggest worry, as detailed in her 2015 report to Congress, is that the IRS' Future Plan could produce a gaping service gap and its compliance/fiscal implications. She wrote:

"The IRS receives more than 100 million taxpayer calls and five million taxpayer visits each year, so a significant reduction in these services will leave taxpayer needs unmet and force millions of taxpayers to pay for help, and generate additional taxpayer frustration with the IRS. As a result, confidence in the fairness of the tax system may erode, and taxpayer frustration and alienation may lead over time to a lower rate of voluntary compliance."

Computer hacking is daily occurrence and the IRS has not been spared.

In mid-February, the IRS revealed that that crooks recently unleashed an automated attack on its Electronic Filing Personal Identification Number, or e-filing PIN, online application. Since then, the fallout has continued.

Krebs on Security blog reports that a South Dakota CPA has had her Identity Protection PIN (IP PIN), which she received in 2014 after her ID was stolen and crooks tried to file tax returns under her name, stolen. Worse, criminals have used that ostensible security filing number to again file a fraudulent return in her name.

Then there's last year's cyber attack into taxpayer accounts via the IRS' online Get Transcript tool. That online IRS security breach is not going away either.

A new report from the Taxpayer Inspector General for Tax Administration, which I discussed last week at my other tax blog, revealed that the number of potentially compromised accounts was greater than originally reported. We now know that more than 700,000 taxpayer accounts, more than double what the IRS originally thought were affected, might be in the hands of tax identity thieves.

With such security issues smack dab in the middle of the IRS' plate, the Future Plan's proposal to go more online seems a bit premature, and scary.

The IRS knows this. That's why its self-described transformation journal has many steps to go from the IRS of today to the IRS of tomorrow. 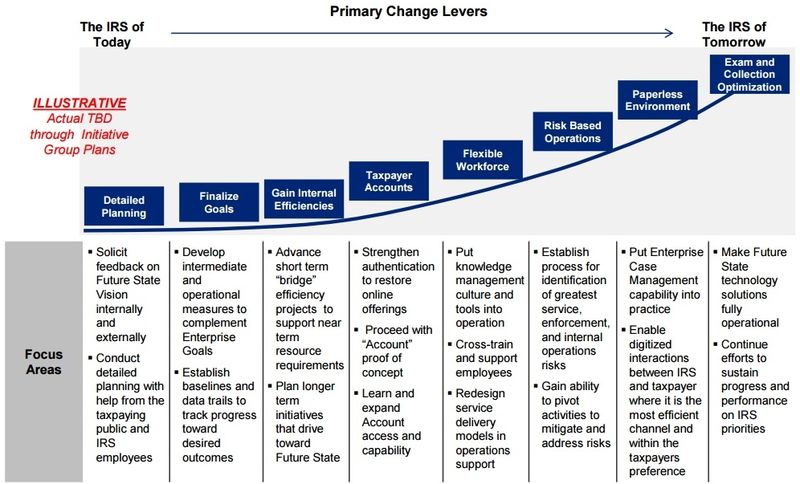 "To master these challenges, the IRS will take a measured approach to moving toward the Future State over the next five years that continues to factor in employee, taxpayer and stakeholder needs and feedback," notes the IRS in an overview presentation of its Future State plan.

Given what's happened and happening with online security lately, that five-year plan might need to be a bit more measured.

That's not a message that many anti-immigration forces want to hear, especially in this presidential election year. But it's something that prior studies, as well as tax pros who assist workers who, while not U.S. citizens, want to pay their taxes, have repeatedly reported.

I usually post my additional tax thoughts over at Bankrate on Tuesdays and Thursdays. If you miss them then and there, check here the following weekend (or thereabouts) for highlights and links.