When the idea to honor an American woman by placing her image on the $10 bill was raised back in mid-2015, it seemed like a great idea.

The bill would be redesigned to feature a deserving woman and unveiled in 2020, on the 100th anniversary of the passage of the 19th Amendment, which gave women the right to vote. 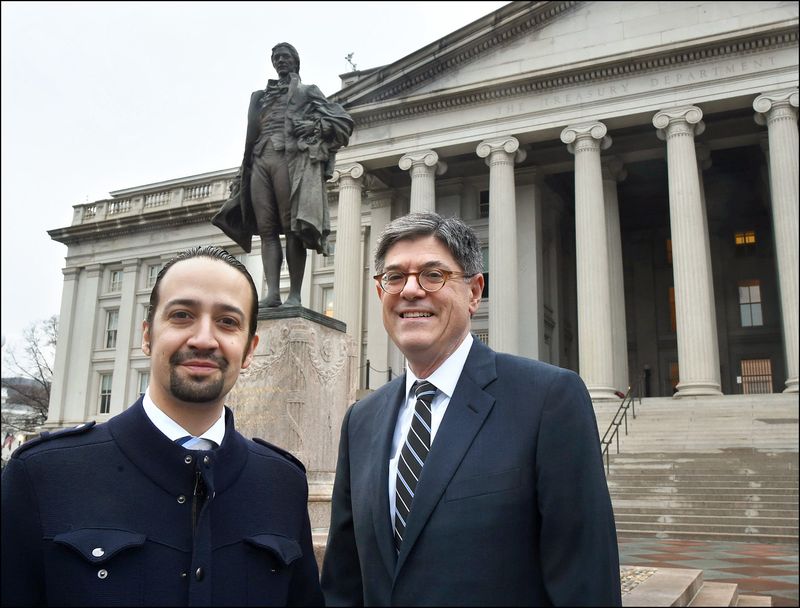 "Hamilton" star Lin-Manuel Miranda and Treasury Secretary Jacob J. Lew pose for a photo in front of the Alexander Hamilton statue on the south side of the Treasury Department, March 14, 2016. (Official Treasury Photo by Chris Taylor)

It received a record 16 Tony Award nominations, but it began getting attention way back when it was in previews at New York City's Public Theater in early 2015. Heck, even the ol' blog asked back then, Are you ready for a singing Treasury Secretary?

The answer has been a resounding "yes!"

The show transferred to Broadway last fall, where it became a bona fide smash hit, setting financial and attendance records.

Financial and political luminaries, including the First Family, a former Veep and past and current heads of Treasury, have made their way to performances. It's even credited, at least indirectly, with helping other Broadway shows get a tax deduction.

But the innovative musical's reach goes beyond the Richard Rodgers Theater.

The show's actors and musicians (who also won a Grammy for the incredibly popular cast album) this week trekked down to D.C. for a White House performance for school kids arranged by First Lady Michele Obama.

Dropping by Hamilton's house: And since they were in the neighborhood, the "Hamilton" group headed over to the Treasury Department.

While there, Lin-Manuel Miranda, the show's author, composer and chief portrayer of "Your Obedient Servant" A. Ham, got some good news about the 10-dollar Founding Father.

Miranda reported via Twitter that Treasury Secretary Jack Lew "said Ham fans'll be 'very happy' about the new $10." The social media announcement was in response to a Twitter query asking Miranda to use his influence with Lew to keep Hamilton on the bill.

That jibes with what Lew had said earlier, that there's room for Hamilton and a notable American woman on the $10 bill.

Lew, talking with BloombergBusiness on Feb. 24, pointed out that our currency has two sides, leaving room for Hamilton and another honored occupant.

Hamilton currency legacy safe: "Look, he left an incomparable legacy in terms of our financial and political system. So he deserves the attention and credit he's getting," Lew said of Hamilton.

"So people, you know, should never have been worried that we were going to do anything that would be to erase that memory."

But, Lew added, "we're going to do some things that are interesting" with the note. (Lew subsequently announced the back of the bill will feature five leaders of the women's suffrage movement.)

That's good news for fans of Hamilton, the man and the show, as well as for "The Schuyler Sisters" Angelica, Eliza and Peggy, who apparently will get a $10 sequel they'll appreciate.

UPDATED 5-3-16 to include links to $10 bill changes and Tony Awards announcement.