That Donald J. Trump. He apparently is special, even in the Internal Revenue Service's eyes.

His tax returns have been audited a dozen or so times. They still are under IRS examination, says the Republican presidential nominee front-runner. That's why he can't let the voters see his 1040s. 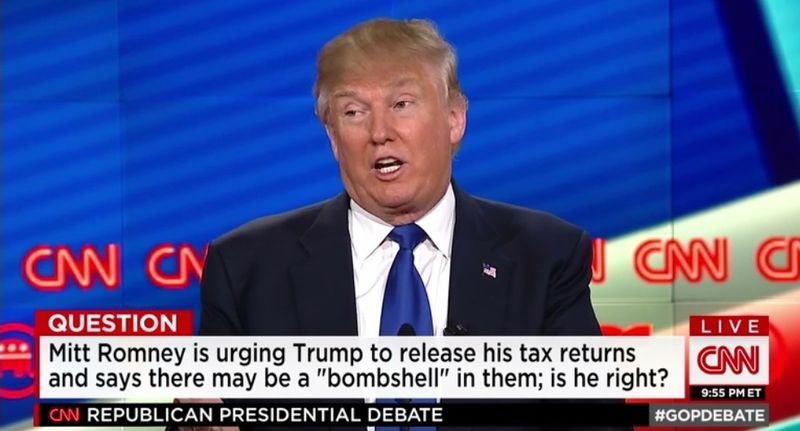 "I'm being audited now for two or three years, so I can't [release my returns] until the audit is finished, obviously," Trump said during CNN's Republican debate Thursday (Feb. 25) night.

Really? This seems to be a bit of backtracking.

Earlier The Donald cited the audits, but indicated in several media interviews that he would open some of his tax filings for public inspection, eventually. Personally, I read that as a sign that, if he secures the Republican nomination, he'd show voters his returns just before the Nov. 8 election.

No need to share too soon. That would just give his primary opponents potential ammunition.

Raising (un)necessary tax questions: But such a delay tends to make folks think you're hiding something.

One of those in who's checked into Camp Suspicious is the last GOP White House candidate, Mitt Romney, who caught a lot of heat until he released his 2010 and 2012 returns. (Interesting family tax note: When Mitt's dad George Romney ran for president in 1967, he released 12 years' worth of returns.)

Romney says Trump's "dodging and weaving" leads him to believe Trump's returns are likely to contain "a bombshell."

We shall see. Or not.

And he insists that his reticence is nothing more that wise discretion while he's under IRS audit.

It is, after all, an investigation and any counselor likely would tell a client not to release anything to anyone unless it's an absolute requirement.

IRS audits wealthy filers more: That Trump has been a serial audit target is not unusual.

While enforcement numbers released by the IRS this week show that overall the audit rate in 2015 was less than 1 percent -- actually 0.84 percent, down slightly from the 2014 exams instance of 0.86 percent and the lowest audit rate in a decade -- richer taxpayers are being audited more.

The IRS data show that for 2015, almost 10 percent (9.55 percent) of taxpayers who reported income of $1 million or more were audited. That's a 2+ percentage point jump from 2014's millionaire audit rate of 7.5 percent.

Click image for more on IRS audits over the last 10 years.

Taxpayer, not IRS, choice: But being under audit does not in any way prevent The Donald, or anyone, from releasing personal tax returns.

The IRS, of course, can't reveal a taxpayer's filings or items therein. There are strict privacy rules that prevent that.

So let's be clear. Trump is under audit. He's probably smart not to reveal any tax information to anyone but the IRS and only then when the agency demands it.

But's he's not releasing his taxes to the voters because he can't.

Trump's keeping his taxes under wraps because he wants to.

As to why? Ready. Set. Gossip! I'm sure Mitt would love to exchange theories.

TRUMP IS CLEARLY MORE UNDER IRS INVESTIGATION THAN JUST AN AUDIT: The IRS usually audits tax returns due to wrong calculations and reporting of HUGE LOSSES that need to be proven. An audit that lasts or spreads over 10 years is not really an audit but an IRS INVESTIGATION. The IRS made a public statement that there was no rule or anything that would prohibit anyone from publicly releasing tax returns under audit; so Trump is lying in his teeth when he says, “I can’t release my returns because I am under audit.” Trump has plenty to hide here. Basically he is running on his claim that he is a great, successful businessman that he is going to make USA GREAT LIKE him.