Donald Trump's opponents for the Republican presidential nomination have to be jumping for joy (OK, my one and only Leap Day reference, I promise) today with the opening he's provided them by playing coy about his personal tax returns.

During last week's GOP debate, Trump cited Internal Revenue Service audit of his tax returns as the reason he's not releasing his 1040s to the public. While that's probably the sound advice he's getting from his tax counsel, Trump's main competitors are taking full advantage of the curiosity in the billionaire's taxes. Marco Rubio and Ted Cruz are coming after Donald Trump about, among other things, his taxes.

Sens. Ted Cruz of Texas and Marco Rubio of Florida this weekend posted years of their federal filings on their respective campaign websites.

But wait, there's more: In their frenzy to show how tax transparent they are compared to The Donald, Rubio and Cruz also opened up some even older federal tax returns.

Cruz pointed to the forms he sent the Internal Revenue Service for tax years 2006 through 2010 when he was running in 2012 for his current U.S. Senate seat.

Rubio also has some tax data going back to 2009 on his campaign website.

A quick note about these older returns, I love that Rubio's 2009 filing was completed by hand, not computer. 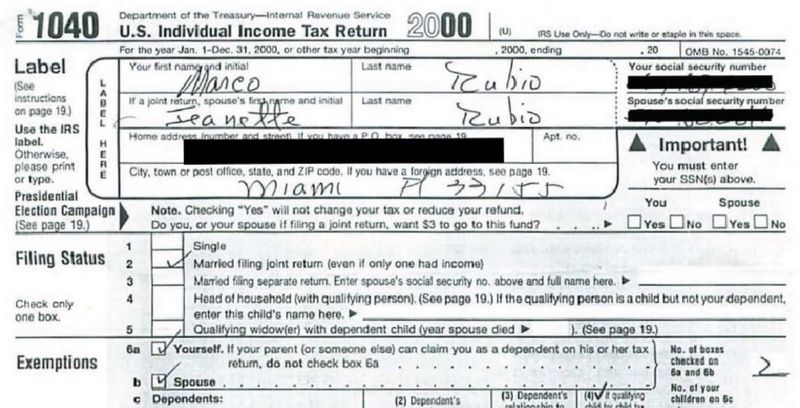 A lot of years, but only partial returns: That's a lot of tax filings to sort through. Actually, however, for several years, both White House wannabes have released only the first few pages of their returns.

Thus they give us an overview of their income and final tax liabilities, but no details on their non-wage earnings or itemized deductions.

So we don't know whether the Cruz and/or Rubio families paid a lot of deductible home mortgage interest or had any substantial medical or miscellaneous expenses in any tax year.

Neither do know what charities they supported, and how generously, through tax-deductible donations.

"If Marco wants to release the full thing for the recent years, I’m happy to do so as well,” Cruz told the Texas Tribune. "We just did it to match what the other candidates are doing. This is a competitive race."

Both men continue to urge Trump to come at least as clean and release his taxes, but don't specify whether they'd be fine with just partial tax returns from the GOP nomination leader.

And just to be fair, we can't forget Hillary Clinton, the front-runner for the Democratic nominations. She's released full returns for tax years 2007 through 2014.

Other Cruz, Rubio similarities: In addition to ganging up on Trump by being so eager to air some of their tax laundry, Cruz and Rubio share a couple of other things.

Both are the junior U.S. Senators for their states. As such, each receives an annual salary of $174,000.

Both men are married, file joint tax returns with their wives and claim dependent children and those associated tax benefits.

And Cruz and Rubio don't have to worry about state taxes. Texas and Florida are among the seven states with no individual state income tax at all.