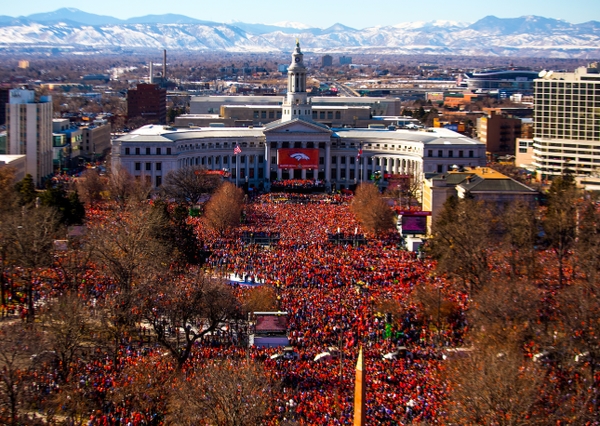 Around a million Denver Broncos fans, including 24,000+ truant schoolchildren, thronged the Colorado capital on Feb. 9 to welcome home their NFL Champions. Photo by Enrico C. Meyer via Twitter.

For many of the players in the NFL championship game, that last "benefit" is more than they bargained for. In fact, note a couple of tax attorneys, some of the Denver Broncos and Carolina Panthers players actually lost money by playing in Super Bowl 50.

Wait. What? How is this possible?

It's due to a combination of how Super Bowl participants are paid and the host city's state tax law, according to Jack Trachtenberg and Jason Feingertz, tax attorneys for Reed Smith LLP.

The complexities and costs of jock taxes: Although it's the biggest football game of the year for professional player, the actual Super Bowl compensation isn't, relatively speaking, that much.

Members of the winning Broncos team each received a $102,000 bonus. Each Panthers player got $51,000 by coming up short on Super Sunday.

However, California requires that taxes be paid on a player's full season salary, so some players may see a loss on their Super Bowl take, according to the tax lawyers who spoke before the Feb. 7 game with Bloomberg BNA.

"For players earning a high salary, when you factor in California's high tax rate, those Duty Days spent practicing and playing in California can result in a tax bill larger than the $51,000 bonus the player receives for being on the losing team," Trachtenberg, counsel for Reed Smith in New York, told the tax news publication in an email. "Therefore, without even considering the federal tax implications of the Playoff bonus, a player can lose money by participating in the game."

Taxable days within a state: The duty days to which Trachtenberg referred are days that professional nonresident athletes spend working in the state during the year. That means, say the lawyers, every player who participated in Super Bowl 50 will have a higher tax bill in 2016 due to extra days spent preparing for and playing in the event.

"Depending on their exact travel arrangements, the players on both teams will spend about 7-9 days in California for the Super Bowl for practices and the big game," said Feingertz, an associate in Reed Smith's state tax department, also in an email with Bloomberg BNA.

Basically, the state taxes the players' annual salaries proportionally for the amount of time spent in the state performing services for their teams.

And based on the sizable annual incomes that most professional athletes earn, they tend to be taxed at California's top personal income tax rate of 13.3 percent, the country's highest individual income tax rate.

While this method of calculation seems wholly unfair, that's the way the tax rules are written in the states' codes and regulations.

And as every taxpayer knows, nobody ever said taxes were fair.

Super Bowl ring's tax cost: Now about that pricey championship jewelry. Is the value of a Super Bowl ring, which nowadays tends to run into five figures, taxable income, too?

That new piece of NFL bling is a taxable fringe benefit. Find out more about the escalating cost of Super Bowl rings and the corresponding tax bills in my post last this week at my other tax blog.

Also over at Bankrate Taxes Blog this week, I looked at the inflation adjustments associated with tax breaks that were made permanent parts of the tax code last December.

I usually post over at Bankrate on Tuesday and Thursday, and then highlight those items here at the ol' tax blog the following weekend.

But I'm still decompressing from the end of the 2015 professional football season, so it seemed fitting to highlight those tax-related items a bit earlier.

Now on to the start of Major League Baseball! Pitchers and catchers report for spring training next week and I'm sure there'll be some stick and ball tax issues.