William Cobb, president and CEO of H&R Block, agrees -- to a point -- with folks who are calling for tax reform. 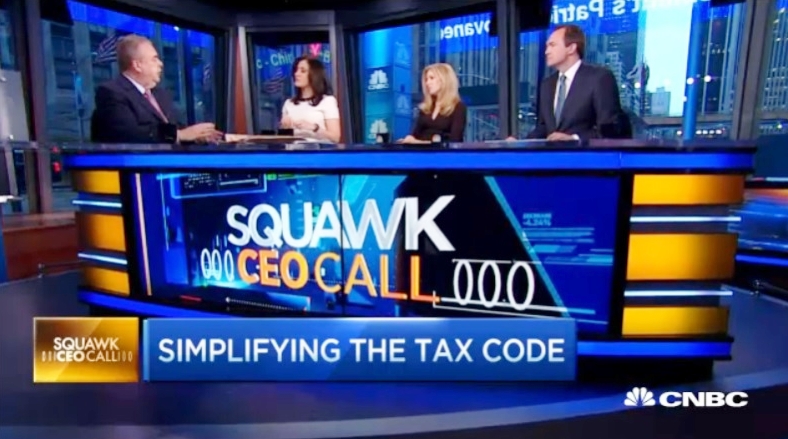 Cobb was in New York City on Tuesday (Feb. 16) to tout Block Advisors, his company's new tax and financial planning option for small businesses, and ring the NY Stock Exchange's opening bell. Since he was in town, he made the media rounds, dropping by CNBC studios to talk about tax reform.

Some "silly" tax laws: The panel of financial journalists at Squawk CEO Call was somewhat skeptical that the chief of the self-proclaimed largest tax services provider in the world wants to make taxes easier. Cobb, however, insisted that everyone -- H&R Block and taxpayers -- could benefit.

"There are ways to simplify the tax code," Cobb said. "For example, there are five definitions of a child. Some of this is silly."

But, no surprise, Cobb doesn't agree with all the presidential hopefuls' proposals to drastically re-do the Internal Revenue Code.

And he's definitely not signing off on Donald Trump's tax plan that the garrulous, querulous and leading GOP nominee says would "put H&R Block out of business."

Tax code as policy vehicle: Much of the code's complexity is due to Congress using taxes to implement social policy, such as providing assistance to families through tax credits (for example, for just having kids and then caring for them), as well as a way to put more money into the pockets of poorer workers through things like the Earned Income Tax Credit.

And we're now in the second tax year of individual taxpayers (and their tax preparers) dealing with the latest public policy program that's tied to taxes, the Affordable Care Act, known popularly as Obamacare.

Before we can start untangling any of those programs and hopefully simplifying the tax laws, Capitol Hill needs to rethink its tax modus operandi.

"The government," said Cobb, "needs to figure out how they are going administer social programs."

Great idea, Mr. Cobb, but good luck with that.

At tax odds on Capitol Hill: When lawmakers start talking about trimming the tax code, they invariably leave in many of the sacred cow tax breaks, such as the mortgage interest and charitable donation deductions. They know that once a tax benefit is on the books, it's incredibly hard to remove it.

Then there's the intense political polarization, which gets more intense with every day of the 2016 quest for the White House. Right now if the Democrats said the sky was blue, the Republicans would call them liars and vice versa.

Plus, it's almost as bad on an intra-party level. Within their respective parties, Republican and Democratic presidential hopefuls disagree on just what kind of tax system changes should be made.

So H&R Block's and its competitors' consumer tax businesses should be safe for a while.