If you drive you've got to be thrilled with the price of gas right now. 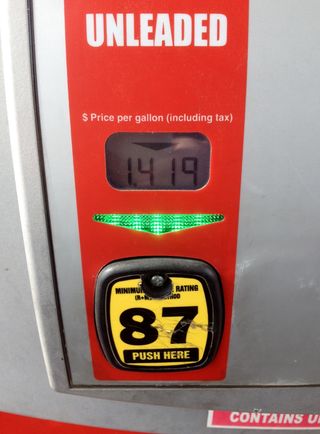 Every time I've filled up my car over the past six months, I've snapped a shot of just how cheap it is. That $1.419 a gallon photo to the left was from last weekend. As I drove past my local gas station yesterday, I saw that it had dropped two more cents.

So which drivers should be worried? Those filling up their tanks in Alabama, Alaska, California, Hawaii, Indiana, Mississippi, Missouri, New Jersey and South Carolina.

The gas tax debates going on in those nine state legislatures is enough to earn the latest By the Numbers honor.

Although the AAA reported on Feb. 16 that the national average price of gas increased for the first time in 20 days, what drivers are paying for gas is still at the lowest level since January 2009.

AAA's Daily Fuel Gauge report of national average prices, updated at 3:45 a.m. Eastern Time on Feb. 21 found gasoline going for $1.71 per gallon. That was around a penny more than a week before, but substantially below the $2.28 per gallon that drivers paid on this date in 2015.

With drivers getting a break on gasoline, state lawmakers see tax hikes as a way to pay for necessary and in many instances neglected transportation infrastructure.

Long road for gas tax hikes: Fuel tax hikes have been one of the most pronounced trends in state fiscal policy throughout the last three years, writes Carl Davis, research director at the Institute on Taxation and Economic Policy, which partners with the Tax Justice Center on the blog.

"With most state legislative sessions now underway, all signs point to that trend continuing this year," add Davis, who also notes that a gas tax debate appears likely in 2017 in a few additional states.

Most of the proposed gas tax increases would  help restore at least some of the purchasing power lost while the levies were frozen, some for as long as two decades.

"But too many of these long-overdue gas tax updates are only being considered on the condition that they are coupled with an equal, or larger, cut in other taxes," says Davis. "Since those other taxes tend to fund services such as education and health care, these 'tax shift' efforts have more to do with reshuffling state investments than with enhancing them."

But at least state lawmakers are looking at one easy, and justified, area to increase taxes.

The U.S. House and the Senate refuse to even talk about inching up the federal gas tax that's been stuck at 18.4 cents since 1993.