Would a cuddly mascot make the IRS lovable?
Not to GOP Representatives still looking to impeach IRS Commissioner

When you say "mascot" to an American, we immediately think of the characters and creatures associated with sports teams.

In Japan, however, mascots have more expansive, and official, roles. The Japanese are obsessed with mascots that range from happy animals to mutated foodstuffs to saucer-eyed humanoids that promote, according to a recent New York Times article, seemingly every town, business and arm of government in the island nation.

Taxhound talks taxes: An Internet search turned up a 2011 publication that offers information on the "Tax System for Small and Medium-Sized Enterprises." It appears to be the Japanese version of the Internal Revenue Service's Small Business and Self-Employed Tax Center.

But the 80-page Japanese document illustrates, literally, its tax advice using Professor Kyoko and the Taxhound. 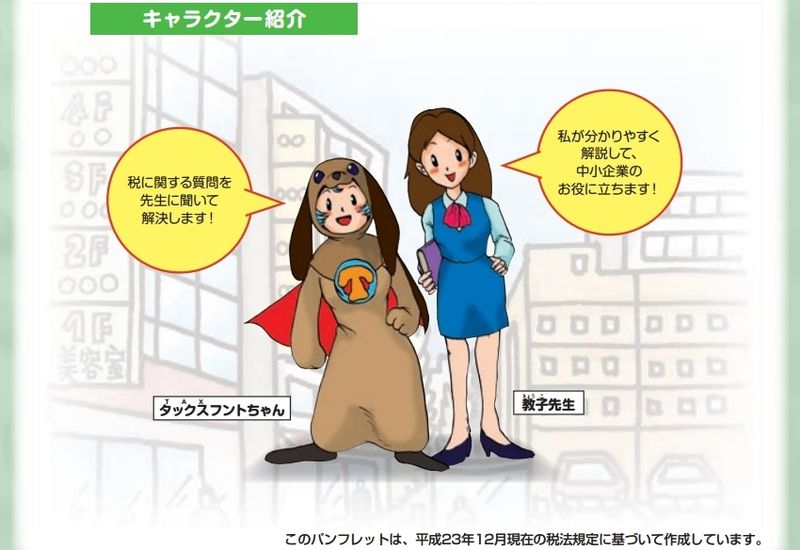 In the character introduction on page 2, Taxhound tells inquiring readers, per Google Translate, to listen to the teacher to have their tax questions resolved. And the teacher, Professor Kyoko, promises to help clarify the tax rules for the small business taxpayers.

Tax mascot for the IRS? Maybe the IRS should consider getting a cute mascot to improve its image and endear it to taxpayers.

It would make all the agency's troubles go away, as people embraced the mascot and the tax efforts it represents. And IRS Commissioner John Koskinen and House Government Oversight Committee members could just hug it all out.

Or not. Some things truly are lost in translation.

Even though the IRS now faces new oversight rules under provisions in the omnibus fiscal 2016 government spending bill that became law on Dec. 18, 2015, some Republican House members of Congress say they will continue their efforts to kick Koskinen out of office.

Koskinen still a target: Rep. Jason Chaffetz (R-Utah), chairman of the House Oversight and Government Reform Committee, on Oct. 27, 2015, introduced articles of impeachment to remove Koskinen from his IRS office.

The official impeachment effort followed Chaffetz's letter to President Obama a few months earlier in which Chaffetz and 20 of his committee colleagues asked the president to fire Koskinen.

Colleagues who agree with Chaffetz continue to beat the oust-Koskinen drum.

"Those [omnibus IRS limits] are all good, but the main thing is to get rid of John Koskinen," House Oversight Committee member Rep. Jim Jordan (R-Ohio) told Tax Notes.

Another Oversight Committee member, Rep. Mick Mulvaney (R-S.C.) also told the tax publication that, "Our objections with Mr. Koskinen deal with him personally. We think he's responsible for the destruction of evidence, which is [an] impeachable [offense] in our minds."

Others are spreading the anti-Koskinen message beyond Capitol Hill.

Rep. Lamar Smith (R-Texas) penned an article last month for the TexasGOPVote's newsletter explaining why he believes it's time to impeach Koskinen.

Senate anger, too: And while there's no official effort on the other side of Capitol Hill to remove Koskinen, some Senators seem to share the sentiment that action must be taken to curb IRS actions.

In a Dec. 20, 2015, letter to the Wall Street Journal, Sen. Pat Roberts (R-Kansas) touted his bill to stop the IRS' "assault on the charitable sector." Roberts was writing about an IRS proposal to have charities voluntarily report more information on donors, including their names, addresses and Social Security numbers, when they contribute more than $250.

The IRS withdrew its expanded charitable donor data collection proposal last week. And the omnibus spending bill prohibits the agency from issuing new rules on the political activities of tax-exempt Section 501(c)(4) organizations, the status that back in May 2013 sparked the Tea Party targeting scandal.

But it appears the IRS change of charity reporting heart and new 501(c)(4) limits won't be enough to stop members of Congress who want the agency's leader gone.

And that level of anger and animosity is not likely to be eased by an IRS mascot or, it appears, anything else.