Have your snail mail and email boxes been filling up lately with tax statements? Mine have. 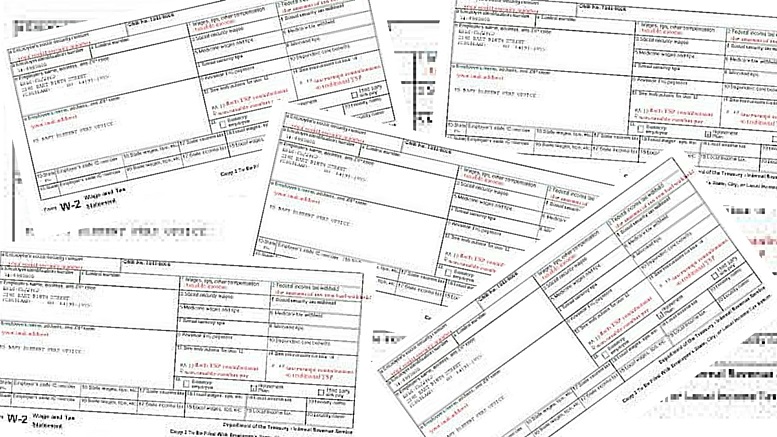 That's good. As soon as we have all these documents detailing our 2015 tax transactions in our hands, physically or digitally, we can file our tax returns.

The deadline for employers and other folks who must send out tax documents to affected taxpayers technically is Jan. 31. When that date falls on a federal holiday or, like this year, a weekend, then it gets pushed to the next business day.

So Monday, Feb. 1, is the deadline this year, meaning our W-2 and 1099 documents should all be in our hands by the end of this week.

And that's why Feb. 1 is this week's By the Numbers honoree.

IRS documentation delay: Next year, the end of January will be doubly tax meaningful. Employees and the Internal Revenue Service will get the annual earnings documentation at the same time.

Currently, employers, vendors and various other payers have until Jan. 31 (or later as noted) to send tax documents to taxpayers. But they have had longer to get copies of that same data to Uncle Sam.

Those earnings docs, known in the tax vernacular as third-party verification, are due at the Social Security Administration (and yes, the Internal Revenue Service gets copied) by the end of February. This year, that's Feb. 29 since 2016 is a Leap Year.

That delay means that for a whole month, the IRS doesn't have a way to confirm that the W-2 and various 1099 etc. information we've been putting on our 1040s is correct. Still, the IRS issues refunds if our filing says we're due one.

Later, when the IRS compares the third-party copies with our W-2s etc. and finds a difference, then we'll hear back from the tax agency about the discrepancy.

Dual deadline next filing season: But that time-lag will be history next year.

For filing season 2017, which will cover the 2016 tax year, employers and other payers will be required to get the IRS its copies of tax payment documents at the same time the agency issues statements to taxpayers.

Obviously the IRS is jazzed about this new development. It was included as part of the fiscal year 2016 omnibus appropriations act that was passed by Congress in mid-December 2015 and signed into law by President Obama on Dec. 18, 2015.

Earlier this month in a conference call with reporters, IRS Commissioner John Koskinen discussed some of the new W-2 matching efforts.

"We've been talking with Congress for the last couple of years about it, and I’m pleased that they did provide that starting next tax season, not this one, employers will be required to provide us W-2 information by the end of January," Koskinen said.

"We've been working with some payroll providers and others on a kind of pilot basis to get a reasonable number of W-2s this year in the January time frame," he added. "Obviously, the earlier we get them, the more useful they are to us, in determining whether questionable returns are legitimate or not. If we've got suspicious returns, and we had over 4 million of them last year, if we have a matching and good W-2, it allows us to lower the rate of what we call false positives, where we've got a legitimate taxpayer whose return for other reasons was now in our suspicious pile."

Koskinen said his agency is confident that, thanks to support from major payroll service providers, that the technology will be in place so that the dual issuance of W-2s etc. to taxpayers and the IRS next year will go smoothly.

Slowing down future refunds: It better. Tax refunds for certain very early filers in 2017 will automatically be held up a bit anyway.

The new budget law also prohibits the IRS from issuing any refunds for returns claiming the Earned Income Tax Credit (EITC) and/or Additional Child Tax Credit prior to Feb. 15 of any upcoming tax years.

The refund delay is an added way to help the IRS combat tax fraud by beefing up its efforts to authenticate taxpayer filings.

The thinking is that the extra days will provide the IRS with time to process the simultaneously sent W-2 and 1099 forms from employers/payers before issuing refunds to EITC and Additional Child Tax Credit taxpayers.

The new budget law says employers now can do that on W-2 forms, too. This also applies to employer ID numbers and International Taxpayer Identification Numbers (ITINS).

The thought is that truncated tax ID numbers will slow down tax identity thieves who are able to get their hands on workers' tax forms or other information.

What do you think of these changes for the 2017 filing season? Will the Feb. 15 hold on refunds pose problems for you next year? Of will you plan accordingly, for example, adjusting your payroll withholding so you won't have to worry about waiting on a refund?

Since I'm not an early filer and rarely -- OK, never -- get a refund, I'm personally for anything that can at least slow down tax identity theft.

Ravindra, I'm a tax journalist/blogger, not a tax preparer. If you need W-2 forms to send to employees, you need to contact the IRS and/or the Social Security Administration.

I need samples of 100 w2 forms which is filed in this year for the tax year 2016. Kindly help me to get this data even i am ready to pay your fixed price.

Jacklene, this IRS page has details on how to let the IRS know your proper mailing address: https://www.irs.gov/taxtopics/tc157.html

How to change my address to receive much w2 forms?

True, the info goes to the SSA, but as noted the IRS gets copies of the data. I have clarified that. Thanks.

Employers report W-2 information to the SSA, not the IRS.