Karma can be a bitch. It also can be funny as hell when it involves a writer who matches his considerable wit against some inept tax scammers.

Last week, my online pal OhMalarkey sent me a link to an item on DaveHolmes' Twitter feed with the note, "You've gotta read this whole thing." Boy, was she right. 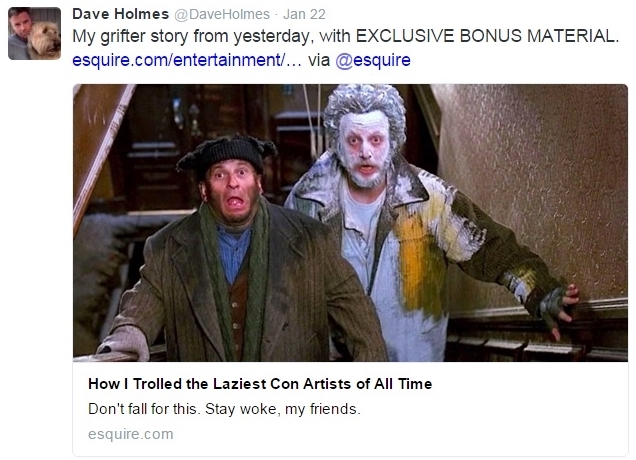 Holmes, a writer for Esquire magazine, got a phone message from some of the crooks perpetrating the fake Internal Revenue Service agent telephone scam. Or, as Holmes described the encounter, "I just got targeted by the laziest, shoddiest grifters I have ever come across in my life, and boy did I enjoy it."

So did I and thousands of other Twitter followers.

In fact, Holmes got so much positive reaction that he took the Twitter tale to Esquire.com, where he is a columnist. Not only is it a great and entertaining tale, it's also much easier to read the 50 or so tweets in top-to-bottom format than scrolling up on Twitter.

Either way, though, it's a good story with a serious lesson for all of us who are potential targets of crooks like these and any identity thieves looking to get and use our personal info for tax and other financial fraud.

I encourage you to check out Holmes' story "How I Trolled the Laziest Con Artists of All Time." It's a quick and fun read.

Holmes didn't pick up the phone when the scammers called. They left a message on his cell phone, which he checked after wrapping up a workout at his gym. The voice mail said, "This is a final notice from the IRS."

Then the fun began.

Holmes quickly realized that the call was the pervasive (and now global) fake IRS agent scam that's been picking up steam since it first was reported back in 2014.

And Holmes decided to have some fun with the callers (three crooks -- Officer Eric Johnson, Officer Debbie and Agent Paul -- eventually were involved in the call) who wanted him to send them $5,300 to cover the $5,273 they said he owed Uncle Sam.

When he reconnected with the crooks, they eventually gave him an account in the name of Jack Milton and bank routing and account numbers to which Holmes was to send the money.

Holmes pretended to go into a bank, complete the transaction and told a delighted Agent Paul that he'd like to read him what was on the bank receipt:

Holmes also shared the La Plata, Maryland, phone number (240-523-3767) for Agent Paul and Officers Johnson and Debbie because "The more time they spend with you, the less time they have to find the one poor shnook who would fall for this and hand over his savings."

I called the number, but keep getting a rapid busy signal. I suspect service to the line (a burner phone?) has been discontinued.

Good. At least these incompetent crooks had to start over.

Don't become a tax scam victim: And the rest of us should take Holmes' tale to heart.

No, we don't have to spend as much time as he did with these and similar tax crooks. Feel free to just hang up if you answer such a tax scam call or simply ignore any message if it goes to your voice mail.

Personal update, February 2016: I subsequently got one of these fake IRS messages, too, but didn't call back as I knew my encounter would be nowhere near the fun Holmes had.

Another personal update, May 2016: And the fake IRS calls with lawsuit threats keep coming.

But do follow Holmes' example and don't send tax or any other con artists your money or personal information.

What's your tax IQ? This particular tax scam, in which fake IRS agents tell individuals they owe money that must be paid promptly through a pre-loaded debit card or wire transfer, is still ensnaring victims. In fact, it has been declared by the IRS as the largest tax scam ever.

It also is an answer in one of last week's Daily Tax Tips, a quick multiple choice quiz on some common tax areas to get you ready for the filing season. Having this answer, which is the last question on the quiz, should make it even easier for you to ace the tax test.

Here are all of last week's tax tips:

You can find the Daily Tax Tip round-up here at the end of the week, or on Saturday when time gets short on Friday like it did yesterday because I got to be part of CentSai's video Twitter chat (also check out #CentSaiChat for links to tips) on making filing easier.

And you can find all the 2016 filing season tax tips on their own special filing season Don't Mess With Taxes pages, starting with January's list.