Take a look at the Form 1040 except pictured below. It soon will have that not-quite complete "draft" watermark removed. 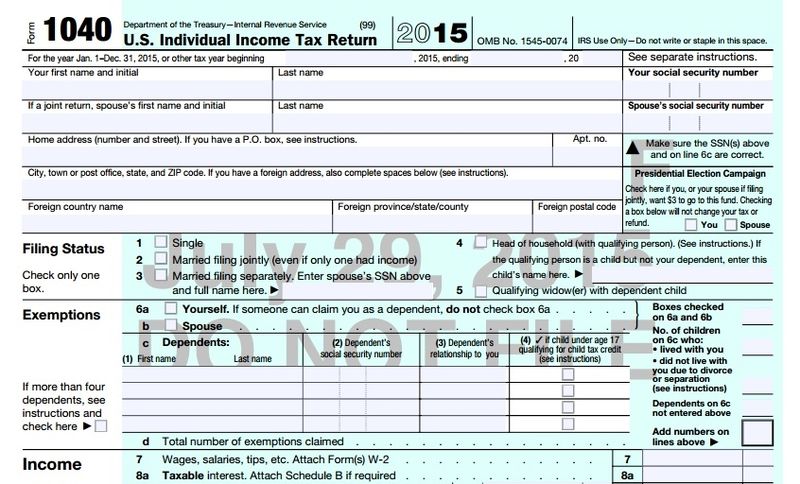 And you know what that means. The 2016 tax-filing season should start on time next January.

As the House was signing on the fiscal year 2016 budget bill and tax extenders package, Koskinen was addressing participating in question-and-answer session at the annual Institute on Current Issues in International Taxation in Washington, D.C.

"The normal start of the filing season would be January 19," Koskinen told the group, according to a report on the event by Tax Notes. "Our hope is that we can meet that, but we're still trying to figure out if there's anything in [the extenders legislation] that's going to cause a delay."

The extenders bill didn't make any major changes to the tax laws that had expired at the end of 2014. The tweaks that were added, in addition to make 22 formerly temporary tax laws now permanent parts of the Internal Revenue Code, should be relatively easy for the IRS to accommodate.

Heck, if the underfunded, understaffed, technology infrastructure challenged agency was able to start the 2015 filing season on time given the legislative chaos that consumed most of December 2014, then it can take care of the latest changes that were wrapped up by Congress today, Dec. 18.

Shortly before I started typing this post, the Senate followed yesterday's House example and easily passed the tax and spending bills. The fiscal legislation is now en route to the White House for final action.

The tax bill, officially titled the Protecting Americans From Tax Hikes (PATH) Act of 2015, and the omnibus spending bill for fiscal year 2016, were attached as an amendment to the Military Construction and Veterans Affairs and Related Agencies Appropriations Act of 2016 (H.R. 2029).

President Barack Obama, during his last press conference of 2015, commended Congress for passing the two measures. And although he noted that he's not happy with everything in the legislation -- attacks on his signature health coverage program make Obamacare and its namesake losers in the deals -- he is expected to sign the provisions into law.

UPDATE: Obama signed the bill Friday afternoon before leaving with his family for their annual Christmas break in Hawaii.

Some members of the prez's own party also grudgingly supported the bills, voting for them over objections from House Minority Leader Nancy Pelosi (D-Calif.) that they don't do enough for working families and increase the federal deficit.

The budget bill comes to $1.1 trillion.

A Joint Committee on Taxation analysis puts the tax bill's total cost over 10 years at $622 billion once revenue offsets are counted. The bulk of that cost comes, according to the Ways and Means Committee, from the 22 tax breaks that have become permanent parts of the Internal Revenue Code. They total $560 billion over the next decade.

More good than harm: In general, folks tend to agree with Obama that (a) it was good to see Democrats and Republicans in Congress somewhat work together, and (b) that in large part the tax and budget bill changes will be good for millions of individual and business taxpayers.

To quote the prez:

"I'm not wild about everything in it -- I'm sure that's true for everybody -- but it is a budget that, as I insisted, invests in our military and our middle class without ideological provisions that would have weakened Wall Street reform or rules on big polluters. It's part of an agreement that will extend tax credits to 24 million working families. … And because it eliminates the possibility of a [federal government] shutdown for the first nine months of next year, Congress and I have a long runway to get some important things done on behalf of the American people."

Value of tax stability: Policy debates aside, which I know is hard to do and many of which will enthusiastically continue, especially as issues heat up during the 2016 presidential campaign, one thing is for sure. Stability when it comes to tax laws, whether you like them or not or agree on how to pay, or not, for them, is good.

Thanks to the almost two dozen now permanent tax laws, businesses can make some longer term plans that should help them grow.

Residents of no-income-tax states know they now have equal tax deduction treatment for their sales taxes alongside their state income tax paying neighbors in most of the country.

And teachers, who get short shrift in too many ways to count, at least know that when they spend some of their own money to help educate our kids, they'll get $250 -- and more in coming tax years, thanks to future inflation adjustments -- of it back as an above-the-line tax deduction.

Yeah, some of those tax provisions on their own aren't that big and don't affect that many people. But as I've said for 10+ years, every tax dollar counts.

And what counts more is that affected taxpayers -- and the tax professionals that help them out each year -- are given enough respect to allow them to make the tax moves they need without having to worry about them disappearing year to year.

So to borrow another comment from Obama at his presser today, thank you, Congress, for ending the year on a high note.