2015 was a record-setting year for MLB's sin luxury tax

Yes, I know we're in the midst of college football's bowl season. And many NFL teams are still in the hunt for a spot in professional football's playoffs.

But baseball recently got my attention.

Part of my sporting focus shift is that the two NFL teams I cheer for, the Dallas Cowboys and Baltimore Ravens, are incredibly sucky this year and out of the playoff picture.

The main reason, though, that I'm looking at Major League Baseball in late December is because 2015 is a record-setting year for the league's luxury tax. 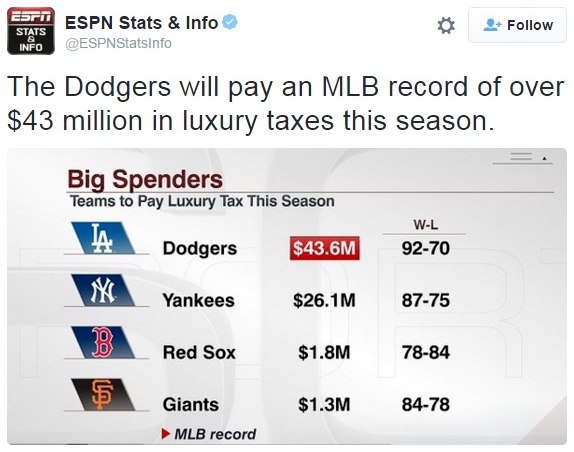 The $43.6 million tax amount itself is a record, earning it this week's By the Numbers honor.

But the Dodgers are not alone. As the ESPN graphic above shows, three other teams also were slapped with monetary fines this year for spending what the league powers-that-be consider too much on players.

This is the first time that four teams exceeded baseball's spending threshold.

The New York Yankees and Boston Red Sox, who like the Dodgers are prior payers of the tax, faced MLB luxury levies again this year. The San Francisco Giants are first-time excess payroll offenders.

Add in the Dodgers' due, and that makes MLB's 2015 luxury tax total take $72.8 million. That amount, too, is a record combined tax amount for a single season.

Three luxury tax records -- most paid by one team, number of teams taxed and overall tax total for the year -- is pretty darn impressive, even for a sport were Sabermetric figures dominate.

Leveling the leagues playing fields: In order to make sports leagues more mediocre competitive, the various leagues' powers that be have set up systems to limit how much teams can spend on players.

Theoretically, this will keep the rich, profligate owners from rounding up all the best players by giving them more money than the other teams can or are willing to pay.

With more equal salaries, so goes the BS dream argument, all the teams will be on a more level playing field, allowing for any team to win games and ultimately a league championship.

The two most common limiters are salary caps and luxury taxes.

MLB opted for a luxury tax, or as it's officially titled, the competitive balance tax. It imposes a penalty on a team when its total payroll exceeds a certain amount previously defined in the league's collective bargaining agreement with its players.

Sports' sin taxes: Essentially it's the sports world's equivalent of a sin tax.

But like its more common tax counterparts, such as higher government levies on tobacco or fatty foods or sugar-sweetened drinks, the results are mixed.

In some cases, the tax cost does deter what the tax creators deem are bad habits. Cigarette taxes has been the most effective, especially in keeping young people with less disposable income , from spending their scare funds on cancer sticks.

A recent study also has shown that cigarette taxes are connected to less smoking by expectant mothers, leading to healthier babies.

And Mexico's national tax on sugary drinks reportedly has helped that country reduce its obesity rate by cutting into consumption of Coca-Colas and similar drinks.

Willing to pay the tax: But in other cases, folks just don't seem to care. They want what they want, tax costs be damned.

That seems to be the case with free-spending major league team owners.

Based on the recent tax and team records, this year's MLB taxed teams seem likely to keep doling out the dollars and paying the tax price despite the lack of results when it comes to hoisting that championship trophy.