Home energy tax breaks are extended, just in time
for the arrival of, for many, an unusually warm winter

Today is the first day of winter and it's supposed to hit 76 it hit 79 degrees here in Austin. Similar temperatures are forecast for the rest of this Christmas week.

I thought we left such winter warmth behind us 10 years ago when we moved from South Florida back home to Texas. And for most winters over the last decade, we've had our share of the cold, like in 2011 and 2013 when we had snow and temperatures low enough to freeze our backyard fountain. 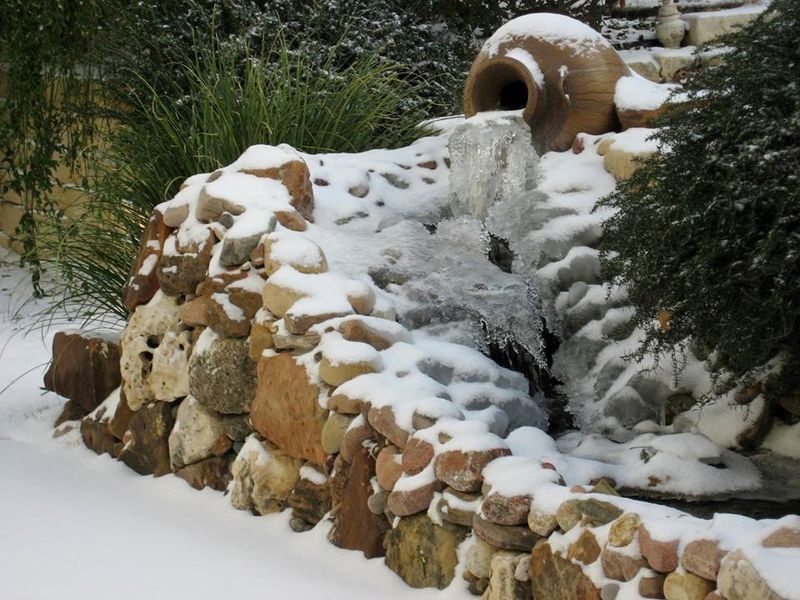 Some winters in Austin, Texas, like this one in 2011 have been cold. But not this year's … so far.

This year, though, Santa will probably want to take off his fur coat as he swings through our part of the Lone Star State.

And we Central Texans are not alone in experiencing unseasonably warm weather. Forecasts for the whole eastern half of the United States are for warmer than normal temperatures this holiday week.

Long-time readers of the ol' blog know I'm almost as fixated on weather as I am on taxes. Check out, for example, my special Storm Warnings page.

Thanks to the recently enacted tax extenders law, those two obsessions meet once again.

Continued credit for home energy efficiency: One of the renewed tax breaks in the Protecting Americans from Tax Hikes, or PATH, Act of 2015 is the credit for non-business energy property (Section 25C). It's better known as the energy efficient home tax credit.

Basically, this tax break is available for making such relatively easy home energy upgrades as adding insulation, energy efficient exterior windows and heating and air conditioning systems. Homeowners who make the qualifying changes to their primary residences will get a 10 percent credit up to specific limits, including up to:

Credit limits, time frames: In addition to the specific upgrade caps, there also are some other limits.

First, the total amount of this tax credit is capped at $500. And it's a lifetime limit per taxpayer. That means if you've taken that much in energy efficient tax credits in the prior tax years that it was available, then you can't claim it again. That goes back to the homeowner tax credits' origins in the Energy Policy Act of 2005, followed by tweaks to them in the 2009 stimulus act and a reversion to smaller homeowner tax credits in 2011.

It is retroactive to 2015, so if you made eligible energy upgrades to your house this year or do so by Dec. 31 you can claim them, if you haven't already hit the lifetime maximum, on your 2015 tax return. The credit also is available through the 2016 tax year.

Limits limit availability: The limits mean that many folks, including me, won't qualify for this tax break.

This year, the hubby and I made a lot of improvements to our home, some of which are, fingers crossed, scheduled to be finished this week. Several of them will help with our house's energy efficiency. But we used up our maximum credit allowance when we got a new air conditioner a couple of years ago.

The credit amount also is not, relatively speaking, that big. Still, every bit of tax saving is important. And it's a credit, which means it reduces what you owe the U.S. Treasury dollar-for-dollar.

So if you made energy upgrades to your house in 2015 or plan to next year, check out this tax break and your eligibility. These improvements are things we homeowners will do anyway. We might as well get the tax benefit for them when we can.

New homes, too: The home improvement tax break applies to older homes that are being refurbished. However, another residential energy break for new houses also was extended by PATH for the 2015 and 2016 tax years.

This is the one for construction of a new energy efficient home. It's available for the building of residences that achieve a 30 percent or 50 percent reduction in heating and cooling energy consumption relative to a comparable dwelling constructed within the standards of the 2003 International Energy Conservation Code (including supplements). Contractors may claim up to a $2,000 credit for each qualified new home constructed and acquired during the tax year.

So if you're buying or building a new home this or next year, look for this tax credit that could help you negotiate a lower purchase price, as well as cut your utility costs while you live there.

Home energy credits that didn't expire: Congress and consumers didn't have to worry about a few home energy tax credits that were already on the books through 2016.

In these cases, qualifying systems could get you a credit of up to 30 percent of the costs. Even better, there's no limit on the expenditure amount to which the credit applies.

The credit for these systems applies to both existing home upgrades as well as systems installed in homes being built. And these credit-eligible energy systems count whether they go into your main residence or a second home.

Business energy tax benefits: On the business tax side, the omnibus spending bill to keep the federal government running through fiscal 2016 (that's until Sept. 30, 2016) that was worked out in conjunction with the extenders, also has some energy tax breaks for companies in the alternative fuel business.

The wind production tax credit (PTC), which had been on shaky renewal ground, was extended in the budget bill for five years, counting retroactively to all of the 2015 tax year and through 2019.

The budget bill also provides for an extended investment tax credit for solar power companies to continue taking advantage of tax credits at 30 percent of the price of a solar panel system, whether it’s a modest home solar kit or a huge commercial solar farm. The credit now will last through 2019 and then will shrink gradually to 10 percent by 2022.

While these tax breaks are for businesses, if they can help alternative fuel companies grow and expand, that should mean benefits for consumers looking to save with new types of energy.

Does anyone know for sure if i can use as a credit - multi-speed gas furnace and energy-efficient heat pump?