Those exclamation points aren't just for show. The holidays have sneaked up on me this year. Yes, it's beginning to feel a lot like mid-April here, with last-minute shopping panic replacing the annual tax-filing freak-out.

If you're in the same fix and are still trying to find a gift for the tax and/or financial person in your life, here are some suggestions that might help make Dec. 25 a bit less stressful than April 15.

Dress the tax part: Tax preparation can often tie the best of us up in knots, so your pro might appreciate some comfortable apparel while he or she is working on all those returns next filing season.

Here are three tops that I found amusing. If your tax pro has a similar sense of humor, she or he might like them, too. 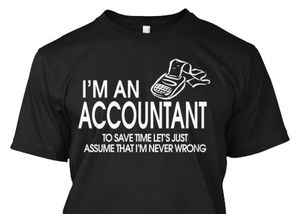 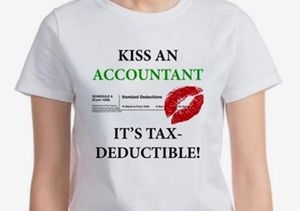 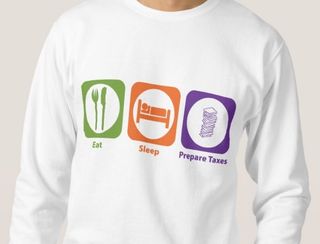 If you click on the shirt images, you'll end up on the websites where you can order them.

And humor. These mugs can hold both. 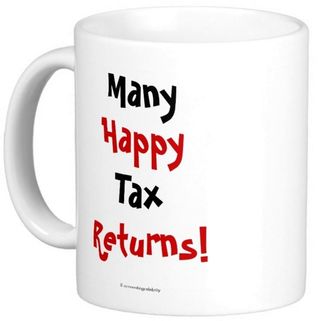 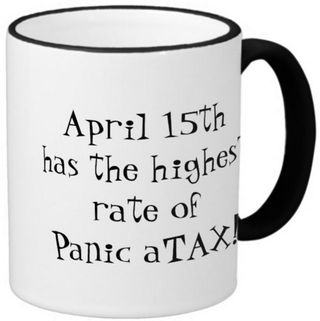 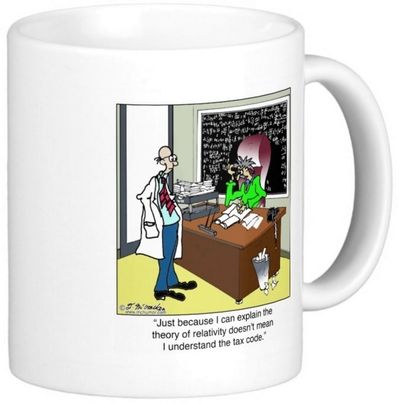 As with the shirts, click on the mugs for purchase details. You also can find more tax-related gifts at Cafe Press, Zazzle and AccountantShirts.com.

And just to make it clear, I will not get any compensation if you purchase anything at any of the above-mentioned websites. I just found them and, in the spirit of the season, thought I'd share.

Read all about it: Tax professionals don't have much free time during the main, or even extended, filing season. But one day they might get to take a break.

When that finally happens, your special tax pro might enjoy reading one of these books.

"Treasure Islands: Tax Havens and the Men who Stole the World" examines the secretive role of offshore banks and tax havens in global economic affairs. It's a few years old, first published in 2011. However, with the renewed global focus on shutting down hidden money havens, this work by Nicholas Shaxson, a political analyst and associate Fellow of the Royal Institute of International Affairs in London, is still relevant.

In his review of the book for The Guardian, Peter Preston wrote:

"Shaxson, a seasoned financial journalist with a talent for asking awkward questions, details how lousy things happened, and why, with a sigh and a neat turn of phrase. If you want to understand how Jersey or the Bahamas work, this is the textbook you need. If you seek to grasp the intricacies of multinational life – run companies in high-cost countries, pay taxes in mini-statelets that don't trouble HMRC – then, again, the basic formulas are all on display. But such treasure islands, with attendant trove studies, seem only symptoms of something far more intractable: basically, a way of doing business that no one – from WikiLeaks to the Oval Office – can reform or replace because no one has the resolve or the means, because there is (literally) no alternative."

Shaxson also was involved in the creation of "The Heavens: Annual Report." He wrote the text while Paolo Woods and Gabriele Galimberti snapped more than 80 photos that are incorporated in the oversized coffee-table book.

Their work is presented as "the self-congratulatory annual report of a successful company, borrowing the photographic tropes and language of the world we have investigated."

THE HEAVENS from edoardo delille on Vimeo.

In fact, the company The Heavens actually exists, according to the book's website. It was incorporated it in Delaware, which often is referred to America's tax haven. In that state, say the photographers, all they had to do was pay a small fee and, with no documents required or questions asked, formed the LLC in less than 20 minutes.

The book's goal, say its creators, is to show that "tax havens are not an exotic tropical eccentricity, but have become a structural instrument of the globalized economy. They confront us with fundamental moral issues, involving the relationships between public and private; between companies and states; and between the haves and the have-nots."

Finally, for your favorite financial etymologists, there's the "The Devil's Financial Dictionary" by Wall Street Journal personal finance columnist Jason Zweig. It's a is a satirical glossary of investing terms that was inspired by Ambrose Bierce's classic work, "The Devil’s Dictionary," which was first published in 1906.

Zweig offered a sampling in a WSJ column last month, including:

CAPITAL, n. The wealth of an individual, company, or nation, a word deriving from the Latin caput, or head — paradoxically, the organ that many investors use the least in their effort to amass capital.

HIGH-FREQUENCY TRADING, n. A technique often used to cheat other traders by a few fractions of a penny in a few millionths of a second, much faster than deceptive trading used to be.

Those two definitions are mere snippets of Zweig's column and the book itself, which has received glowing reviews. I know I've asked Santa for my own copy. I might find a few terms that also could make it into the ol' blog's tax glossary.

One more note about my book gift suggestions. I'm not quite as altruistic here as I was with the shirts and mugs.

The links to "Treasure Islands" and "The Devil's Financial Dictionary" are through my Amazon Affiliate account. If you buy from those click-throughs, I will be compensated. The link to "The Heavens," on the other hand, goes directly to that book's authors' website.

Regardless of what items you buy and how, I hope that you find the perfect present for that hard-to-buy-for tax person in your life.

And Merry Christmas to us all!

You also might find these past tax gift posts of interest.  Some of the items might still be available.