The biggest hit on Broadway right now is an inventive musical about the United States' first Treasury Secretary. 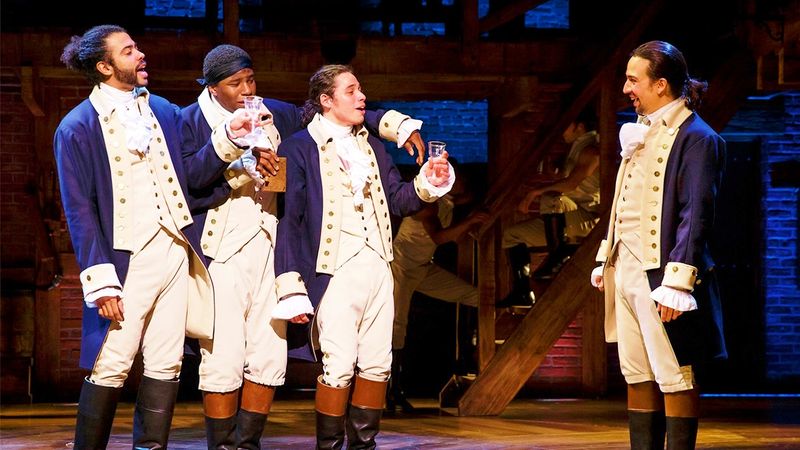 And on Friday, the tax extenders bill became law, including a new provision that gives a tax break to shows on the Great White Way.

Coincidence? I think not.

But it sure didn't hurt that "Hamilton" has made many in Washington, D.C., more familiar with the New York City theater scene. The political luminaries who have shown up to see performances of the singing, rapping and dancing Founding Fathers have included President Barack Obama, as well as the current and two former Treasury Secretaries.

The tax change will benefit theatrical productions off and beyond Broadway, but New York theater producers lobbied especially hard for the law, which extends to live theater a tax benefit already provided film and television industries.

The special expensing rules were added to the Protecting Americans from Tax Hikes, or PATH, Act of 2015, as the extenders package was officially titled, by Sen. Charles Schumer and Sen. Roy Blunt. Democrat Schumer represents New York. Blunt, a Republican, is from Missouri, home of Branson and its many live entertainment offerings.

"Broadway is one of the economic engines of New York, and to make sure it gets the same treatment as movies and television seemed only fair," Schumer told the New York Times. "It will help producers and investors."

Accelerated deductions for all: The law will provide an incentive for investors in live theatrical productions by accelerating deductions and by ending the practice of requiring them to pay income tax on so-called phantom profits.

This change, say supporters of adding theater folk to the tax mix, should encourage investors and producers to develop shows in the United States, rather than in Britain, where it is less expensive to mount commercial productions.

Plus, pointed out Charlotte St. Martin, president of the Broadway League, the tax law was unfair because "we, of all the art forms, were the ones left out."

The new tax parity was welcomed not just on fairness, but also on financial grounds.

"It is getting riskier and riskier to produce shows on Broadway, even though business is booming, because costs are escalating," Ken Davenport, a Broadway producer, told the Times. "Broadway is one of this country's greatest cultural and economic exports, and finally, Congress has realized that they can't afford to lose that."

We'll cut Davenport some slack for sounding a bit dramatic about the new Broadway tax break. We all know that's how show people get things done.

Just for a year: The one bit of bad news for theater folk is that the television, film and now live theatrical productions expensing law is just in effect through Dec. 31, 2016.

But I'm sure New York and other theatrical reps from across the country are working on a book and lyrics for a revival of this tax break production next year.

Extenders, omnibus dominated: Show people were among the winners in this latest tax extenders epic, as I noted here at the ol' blog last week when agreement on the bill was announced.

I also looked at some of the specifics in the measure last week at my other tax blog.

The biggest news about the extenders package is that 22 of the provisions are now permanent parts of the Internal Revenue Code.

Also over at Bankrate last week, I looked at how the House and Senate were working to complete work on not just the expired tax provisions, but also on a spending bill that would keep the federal government running for all of the fiscal 2016 year.

I usually post at Bankrate Taxes Blog on Tuesdays and Thursdays. Last week, however, Congressional action prompted posts on Tuesday and Wednesday. Whatever the day, if you miss my additional tax though over there, check here on the weekend for highlights.