This specific commemoration marked the armistice between World War I's Allied forces and Germany ending the fighting on the Western Front at precisely 11 a.m. on Nov. 11, 1918. 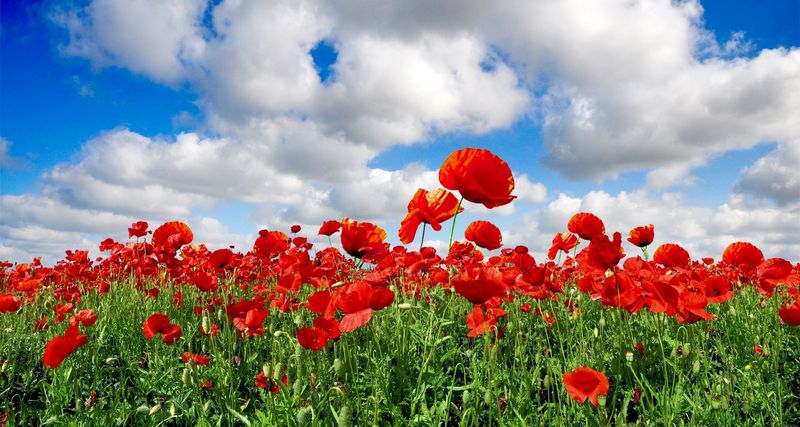 The poppy was adopted as the official memorial flower of the Veterans of Foreign Wars in 1922.

The date has held firm, withstanding the penchant here in the United States to shift holidays to Mondays to create three-day weekends.

But its focus was expanded in 1954. That year Congress, at the urging of veterans service organizations, Armistice Day became Veterans Day and Nov. 11th became a day to honor American veterans of all wars.

And while the day's name changed, another tradition continued, The Buddy Poppy as a symbol of Armistice/Veterans Day was  inspired by the poem "In Flanders Fields," written by Col. John McCrae, a World War I surgeon with Canada's First Brigade Artillery. It expressed McCrae's grief over the "row on row" of graves of soldiers who had died on Flanders' battlefields.

If you see someone wearing a poppy today, take a moment to acknowledge it.

And at 11 a.m. this morning, remember those who gave their lives in service of our country, as well as those willing to make that sacrifice now if called to do so.

Tax help for veterans: Although tax benefits can never repay the men and women who served, former military members do get some special consideration.

Most states provide special tax benefits to disabled veterans and their families when it comes to property taxes. Veterans generally are allowed a larger exemption on the value of real estate subject to taxation, which reduces and in some cases eliminates property tax liability.

Check with your state's veterans' affairs office or tax department for details.

On the federal level, Uncle Sam offers a variety of federal tax breaks for military members, ranging from special treatment of combat pay when it comes to applying for the Earned Income Tax Credit to extended filing deadlines in some cases.

Business tax break in limbo: For the last several years, employers who hired veterans were eligible for the Work Opportunity Tax Credit (WOTC). However, this business tax break expired on Dec. 31, 2014.

With 2015 winding down, the IRS, businesses and veterans  are still waiting on Congress to resurrect the WOTC. It is part of the tax extenders package that the Senate Finance Committee approved this summer.

The House Ways and Means  Committee, however, has not OK'ed a full extenders package. It has opted instead to approve a handful of expired tax laws separately.

New Ways and Means Chairman Rep. Kevin Brady (R-Texas) says he's willing to work with his Senate counterpart to get the extenders through.

Let's hope that the veterans we honor today don't have to wait too much longer to get this help finding jobs in their post-military lives.