If you thought you just watched the Republican presidential candidates go after each other (and the moderators), you're right. They debated, so to speak, economic issues, sort of, on Oct. 28.

But they're back tonight. The eight top-polling Republican presidential hopefuls will face each other in Milwaukee in the fourth GOP debate. And the announced topic is, once again, economic issues, including taxes. 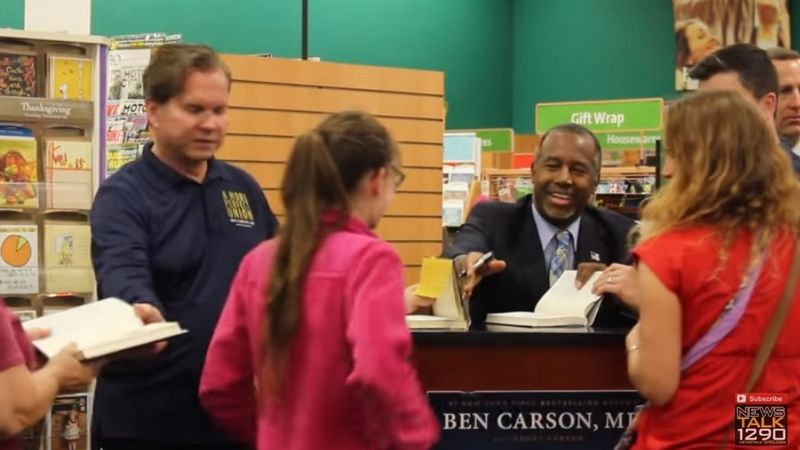 Ben Carson has been on a book signing tour (pictured at an event in Wichita Falls, Texas; click image to view News Talk 1290's YouTube video, which includes Carson comments on the tax code), but he's made time to be at tonight's Republican debate in Milwaukee.

4-man undercard: Governors, current and past, will dominate the so-called undercard debate that will precede the main event on Fox Business News.

New Jersey Gov. Chris Christie and former Arkansas Gov. Mike Huckabee, formerly main debate participants, didn't poll high enough to be part of the prime time face-off. Tonight instead they will go up against Louisiana Gov. Bobby Jindal and former Sen. Rick Santorum of Pennsylvania before the top eight go at it.

For scorekeepers, two White House wannabes who had been part of prior "kiddie table" GOP debates, former New York Gov. George Pataki and Sen. Lindsey Graham of South Carolina, failed to qualify for either of tonight's debates.

Moderators role: Following the last Republican debate on CNBC, NBC's cable business network, the candidates complained about the moderators as much as they went after each other.

This time the media questioners from Fox Business News and The Wall Street Journal promise to keep the focus on substantive matters.

It's the first debate since Carson has emerged as a leader in some polls. That front-runner position has meant more questions about his policies and particularly his memories included in his popular biography.

Similar memory questions also were raised today by The New York Times about the recollections of Cruz's father about his role in Cuban revolutionary politics before his family fled the island.

Then there's the simmering, but heating up, Bush-Rubio feud.

And there's always the hope fear possibility that The Donald will be vintage The Donald.

More emphasis on economic issues: Another complaint about the last ostensibly economics-focused debate was that the candidates generally failed to connect their fiscal policy proposals to the financial well-being of average Americans.

Take their tax plans. Some of the Republican candidates have detailed tax reform plans; others are more general in how they would revamp the Internal Revenue Code.

But none spent any appreciate amount of time at the last debate discussing them. Basically, all have used the debates to argue that they would lower tax rates and that their tax reform proposals would spur economic growth.

I realize that the format and the many participants, especially on the GOP side, doesn't allow for a lot of elaboration, but they need to get past general campaign "taxes suck" rah-rah.

You can check out the various candidates' tax plans, both Republican and Democrat, before tonight's GOP debate and Saturday's head-to-head-to-head of the three Democrats at the following stories by The Wall Street Journal, Vox and The Tax Foundation.

I hope the candidates are doing as much homework for tonight's and future debates.