Maybe this last Sunday you were watching continuing coverage of the horrific terrorist attacks on Paris. Or perhaps, needing a break from the evil that humans too often inflict upon each other, you switched over to the Sunday night NFL game.

Regardless of why, you missed House Speaker Paul D. Ryan's appearance on 60 Minutes. 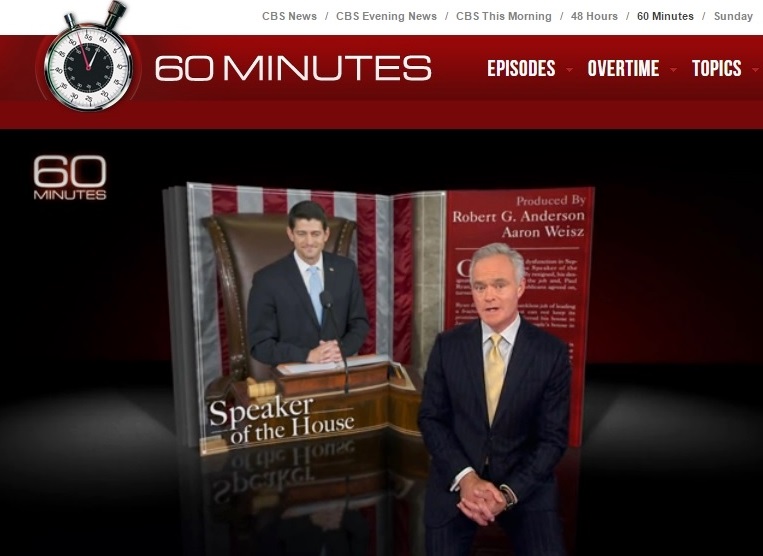 That meant you also missed the former Republican presidential nominee and GOP budget guru sharing a few thoughts on tax reform. You're really kicking yourself now, aren't you?

No worries. Thanks to, or maybe curses on, the Internet, you can watch CBS News anchor Scott Pelley's interview of Ryan any time you have a spare 15 or so minutes.

A tiny bit of tax talk: But if you're just interested in the tax talk, which starts around the 9 minute, 20 second mark, here's the exchange:

Pelley: You have proposed having only two tax brackets, 10 percent and 25 percent. That still your position?

Ryan: Yeah, I've always liked that plan. And our tax code really punishes our small businesses, which is where most of our jobs come from. I mean, look, we're sitting here in Wisconsin, overseas, which to us means Lake Superior. You know, the Canadians are taxing their businesses at 15 percent. The top tax-rate on successful small businesses in America, here in Wisconsin, is 44.6 percent. How can you compete like that? How can you have jobs? How can working families get ahead with a tax system like that?

Pelley: Give me three things you would do on tax reform. Very specifically.

Ryan: Well, I'd simplify the code dramatically. I would collapse the rates down to two or three. And I would change the way we tax ourselves internationally, so businesses can take their money and bring it back home so American businesses stay American businesses. And we have to drop our rates on our businesses. I think those three things right there are what I would do.

Corporate tax reform first: As Ryan's brief comments indicate, he's leaning toward corporate tax reform right now. That meshes with the conventional wisdom that there's more bipartisan consensus that business taxes need to be dealt with first. Even President Obama has said he would like to revise our corporate tax system.

And rewriting at least a part of the tax code is one area where Ryan hopes the Administration and Capitol Hill can find some common ground. Ryan says he can work with Obama; "He's my president, too," says the new Speaker.

We shall see how long this bonhomie -- Ryan says that since he took the House gavel, he and the prez have talked a few times, about substantive issues, as well as the difficulties fathers of teenage daughters face -- lasts.

Ryan's future: One other interesting tidbit from the 60 Minutes spot was Ryan's discussion of his political future.

His father, grandfather and great-grandfather all died in their 50s. Ryan, who will turn 46 next January, says that has made him more fully appreciate how short life can be.

Maybe that's why, as he told Pelley, before the House Speaker opportunity fell into his hands, Ryan had planned to serve out his term as Ways and Means chairman and then find "something else to do with my life."

When asked specifically by Pelley whether than meant leaving the Congress, Ryan answered, "well, yeah."

He says he has no plans beyond his current term as U.S. Representative of the 1st Congressional District of Wisconsin. But if he can corral the Tea Party faction of his Republican party and reverse the public dismissal of this so-called do-nothing Congress, he might stick around for a while.

Congressional accomplishments could be a nice foundation from which to launch a 2020 presidential campaign.