Paying tribute to our troops is not cheap. Recent on-field displays of patriotism at sporting events cost taxpayers almost $7 million dollars, according to a report released last week by two U.S. senators. 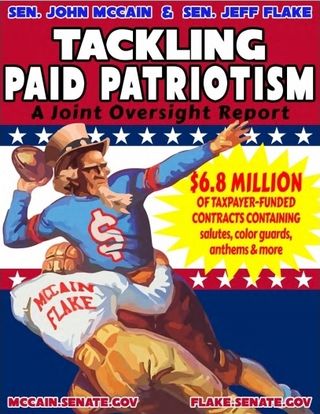 But the U.S. Treasury will get some of that money back.

In the wake of the report "Tackling Paid Patriotism," initiated by Sens. John McCain and Jeff Flake and released Nov. 4, NFL Commissioner Roger Goodell has promised that the National Football League would pay back costs for activities beyond recruitment or advertising.

More leagues, money involved: McCain and Flake, Arizona's Republican senators, started looking into the Department of Defense's payments for patriotic displays at sporting events after a report in May on NJ.com.

That news site's initial investigation found that star-spangled ceremonies at 16 NFL games during the 2011 through 2014 seasons were not, as implied, simply expressions of gratitude for our troops. Rather, Department of Defense (DoD) armed forces units paid around $6 million for the events.

The McCain-Flake follow-up found a few more taxpayer dollars were spread among all the major professional sporting leagues for such ostensibly purely patriotic observances.

The Senate oversight report reveals that 72 of the 122 DoD contracts with teams in the National Football League (NFL), Major League Baseball (MLB), the National Hockey League (NHL) and Major League Soccer (MLS) included payments of $6.8 million to honor American soldiers at their events.

And, note McCain and Flake, "this unfortunate story is not limited to professional" sports. The report includes examples of DoD expenditures for paid patriotism and related perks at Indiana University, Purdue University and the University of Wisconsin.

The standard argument from the DoD is that the money spent to showcase troops at sporting events provides valuable community outreach and supports the military's recruiting efforts necessary to sustain all-volunteer forces. DoD memos supporting these programs and expenditures are included in a report appendix.

Justified or not, the total $6.8 million earns this week's By the Numbers honor, or dishonor depending on your point of view.

Paid patriotism payback: Even before the senators made their findings public, the NFL was taking action.

In a Nov. 2 letter to McCain and Flake, NFL Commissioner Roger Goodell pledged that the National Football League would conduct an audit of all contracts between its clubs and military service branches.

Where government payments were made for activities beyond recruitment or advertising, the commissioner said Uncle Sam would be repaid. "If we find that inappropriate payments were made," wrote Goodell, "they will be refunded in full." NFL spokesman Brian McCarthy said the league would complete its audit as "quickly as possible."

The NFL's prompt response is not surprising. It started taking action when the paid patriotism issue arose.

In July, the NFL told its 32 franchises that "any on-field recognition, community events, or other activities that are not specifically in the form of recruitment or advertising should never be included in contracts or otherwise performed for payment."

And the NFL also worked with the McCain-Flake investigators, making its case for nonpaid patriotic displays in one of the report's appendices. There the league highlights its various charitable campaigns connected to military causes, as well as details some of the NFL teams' and players' participation in other armed forces events.

The NBA said that while pro basketball teams do occasionally recognize service members with on-court ceremonies, the tributes are not paid for by the military. The NBA, however, did say it would conduct an additional review to ensure that this is the case.

The NHL and MLB have not yet responded to the report.

Money vs. perception: Practically speaking, around $7 million is not that much money for an agency that receives billions. For example, the DoD's overall 2013 budget, which falls in the middle of the time frame investigated by NJ.com and the Arizona senators, was $619 billion.

But McCain and Flake are as concerned as much by the perception of the events as the money.

"While many professional sporting teams do include patriotic events as a pure display of national pride, this report highlights far too many instances when that is simply not the case," write the senators in the preface to their report.

"It is time to allow major sports teams' legitimate tributes to our soldiers to shine with national pride rather than being case under the pallor of marketing gimmicks paid for by American taxpayers."