Rep. Paul D. Ryan wasn't kidding when he said he didn't want the House Speaker job to infringe on his family time.

House leadership has released the chamber's work schedule for 2016 and Representatives will be in official session on only 111 days next.

Nice work, or not, if you can get it. 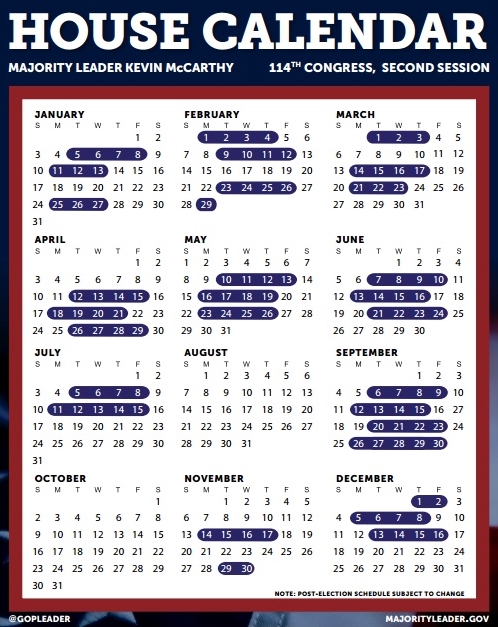 The days highlighted in blue are scheduled work days for the U.S. House in 2016.

The House's calendar for the upcoming second session of the 114th Congress includes the fewest amount of days the House has been session since 2006, according to those who track such numbers.

Nine years ago, Representatives were gaveled into session on 101 days.

That makes the 2016 calendar the second fewest scheduled House work days since 1975.

Shrinking trend: If you look closely at the calendar, there only two weeks where Representatives are planning to work a full five days.

The reduced working time is not new. For the last three years, the number of U.S. House working days has shrunk.

Vacation, too: But wait. There's more; literally more time off.

The House also will take a seven-week summer vacation. That, say Congress watchers, is the longest time off it's had this century.

We're all used to the August recess, or as Congress likes to call it, summer district work period. Our legislative body actually is required to take that month off. Really!

As a former Washington, D.C./Maryland suburbs resident, I can fully understand the desire to escape the heat and humidity of the region that time of year.

But in 2016, the summer recess will begin in the heart of the season, on July 16. That explains the full work week crunch before Representatives call it a summer.

The limited days on Capitol Hill in July also accommodate the two major political parties' presidential conventions. Republicans will gather in Cleveland the week of July 18. Democrats will meet in Philadelphia the following week.

And in addition to taking half of July and all of August off, the House won't meet a single day in October either.

This, of course, is to give them time in the coming (re)election year to campaign meet with their constituents right before voters head to the polls on Nov. 8, 2016.

Bad political optics: Some cynics say the country is better off when Congress isn't in session. OK. I'll admit that in some cases, Congressional inaction would have been preferable.

But working for just a third of a year? C'mon, man! That just doesn't look right.

And it undercuts the tagline at the bottom of the House's annual calendar:

Freedom? Yep, for Representatives. Opportunity, too.

But Accountability? Again, I say c'mon.

This calendar ensures that "the People's House" always remains in-touch with those back home. District work weeks provide an invaluable opportunity for Members to meet with and listen to constituents: working families, seniors, and veterans. Discussing ideas and concerns is a critical function of a responsive, representative democracy, and for this reason, our schedule will continue to provide Members considerable time for constituent services in their districts each month.

Working from home: Sure, committees can still meet, even in the chairs' home districts, if members are so inclined.

And if something happens that demands Congressional action, Speaker Ryan can call his colleagues back to D.C.

But it's going to have to be really major for that to happen.

So take advantage of your Representative being around a lot next year. When you get the chance, make them work from home, at least a little.

They sure aren't planning to do much of that at their main D.C. offices.

But yet no one seems to care because they keep getting reelected. Come on America we deserve more than this.

What's the point of meeting when the President absolutely refuses to compromise on anything with members of the opposite party?

That's enough time for Congress to pass a few continuing resolutions, which is pretty much all the President will not veto.

Any wonder the approval rating for Congress hovers near single digit percentages?