To many, Donald Trump is a blowhard. But it turns out he has a legitimate connection to wind beyond his personal constant stream of hot air.

The Republican presidential hopeful told a group of Iowa voters at a town hall meeting this week that he supports the federal tax credit for wind power producers.

That's a pretty big surprise. Not just because Trump is actually talking about a piece of tax policy, but also given his hairdo you'd think he wouldn't be a big fan of wind. 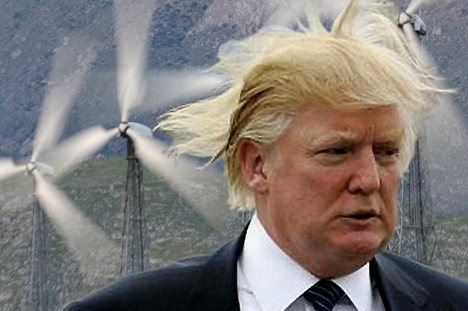 Yeah, I know, cheap and easy joke, but when someone walks into it, you gotta take the shot.

Seriously, though, the tax credit is a hot topic right now, especially in Iowa. Not only is the Hawkeye State home of the first caucus of the 2016 presidential election season, it ranks third in the country in terms of wind power capacity.

"It’s an amazing thing when you think they can, out of nowhere, out of the wind, they make energy," Trump said.

And while the candidate said that he doesn’t like federal subsidies in general, Trump told the group that wind farms are "very expensive to build and without it I don’t think they work without subsidy." Then he qualified his support, noting that "when you need subsidy, it's a problem."

Wind's part in tax extenders: The tax break for wind power was part of the tax extenders package that expired at the end of 2014. Most of the expired provisions have bipartisan support and likely will be renewed.

But the fate of the tax credit for the wind industry is uncertain.

In July, the Senate Finance Committee approved by a 23-3 vote a two-year renewal (for 2015 retroactively and through 2016) of tax extenders. That measure included a provision that allows wind farms to qualify so long as they start construction while the tax credits are in place, which would be by the end of 2016 if the package is approved by Congress.

The House Ways and Means Committee, however, has not approved an overall extenders package. That tax-writing panel has opted instead to pass some of the expired tax breaks separately and to make those provisions permanent. There's been no House action on the wind power tax measure.

Working on extending again: The House and Senate tax writers have been meeting this week to work out extending the 50 or so tax breaks yet again. But as with most things on Capitol Hill, the process is not going that smoothly.

It looks like that some extenders will be made permanent, but just which ones is in flux.

Some members, primarily Republicans, want to focus on business tax breaks, while others, mainly Democrats, say that some individual tax benefits need to be put permanently in the tax code, too.

Then there's the time factor. By the time the House and Senate return from the Thanksgiving break, there will be just a month left to get a lot of work done.

Lawmakers must finish up the highway bill (a Dec. 4 deadline), as well as an omnibus government funding bill by Dec. 11 to prevent a shutdown of federal offices. And other matters, such as the Syrian refugee issue, are finding their way onto the end-of-year legislative agenda.

Right now, the crunch is favoring a short-term extension of the current tax extenders.