Infamous tax protester Irwin Schiff has died
His anti-tax tactics live on, as do penalties for those who insist on using them

Irwin Schiff, the man who mainstreamed the tax protester movement, has died.

His family said he passed away on Oct. 16 at a Fort Worth, Texas, hospital affiliated with the federal prison where he was serving, yet again, time for tax evasion. The cause was lung cancer. He was 87. 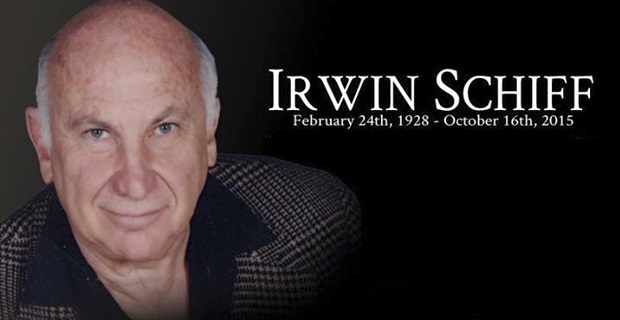 The latest prison sentence was Schiff's third, all of them connected with his claim that income taxes are unconstitutional.

Popular leader of no-tax groups: The books were primers for the tax protester movement and other groups that oppose the federal government in general.

"Everyone knows I believe no law requires me to pay taxes, so there is no willful intent to commit a crime," Schiff said when in was indicted for tax evasion in 2004. "And if I am wrong, then I am delusional, in which case I am not willful. So they can't legally convict me of tax evasion or any other crime that requires willful intent.”

To his followers, Schiff's anti-tax crusade was Quixotic. Since the income tax that we know today took effect in 1913 with the ratification of the 16th Amendment, no legal argument against the tax has been upheld.

The Internal Revenue Service, federal prosecutors and others in the tax and financial industries, however, don't have such a kind view of Schiff's cause.

"A lot of desperate people latched onto Schiff's schemes as a quick solution to their problems, and their lives were effectively destroyed," J J MacNab, a financial consultant and the author of Tinderbox, a critique of the tax-protest movement, told the New York Times. "When most tax-protest leaders go to prison, it's like they vanish, but he was such a charismatic figure in the movement that rather than being forgotten he was turned into a martyr."

Beware frivolous tax arguments: If you're looking for some reading (in addition to MacNab's book) to counter the claims of Schiff and other tax protesters, the IRS has its own publication.

The Truth About Frivolous Tax Arguments, updated in January, is the IRS' online description of and response to some of the common anti-tax arguments made by individuals and groups who refuse to comply with federal tax laws.

You'll find in the first section such tried but not true arguments as filing a tax return is voluntary, you can file a "zero return," only income from foreign sources is taxable, and the only employees subject to federal taxes are workers who are paid by Uncle Sam.

The IRS notes that while it has tried to be comprehensive in its examination of tax protester ploys, the online document is "not intended to provide an exhaustive list of frivolous tax arguments." And, warns the agency, just because a frivolous argument didn't make it into the publication, that doesn't mean it's an acceptable tax dodge.

"The government and courts are not precluded from penalizing taxpayers who raise a frivolous argument not addressed in this document," says the IRS.

And if after perusing the IRS document you're still insistent on following Schiff's example, you should pay close attention to the publication's final section. That's where you'll find explanations of the penalties that the courts may impose, including jail time, on folks who insist on taking the anti-tax route.

The only income taxes that may be due for the year 2015 are coming from persons as described in 26 U.S.C. subtitle C, chapter 24, sections 3401, 3402, 3403 and 3404, and the tax is paid voluntarily or to not volunteer to pay, noting such in section 3402(p) and 3402(n), which is based upon subtitle A, being also verified by the "Index" to 26 U.S.C., under the caption, "Liability for tax", where it will be seen that "income" is not listed as a "taxable subject". In subtitle F, chapter 61, section 6001, instructions for information on tax returns, the following statement is made: "Every person liable for any tax..." and in the same subtitle, section 6011, general requirement of tax return; "When required by regulations prescribed by the Secretary any person made liable for any tax.....". This demonstrates that a "liability for tax" must be made for any individual for the tax to be owed.
I challenge Kay Bell to refute this easily read and understood law in 26 U.S.C which is not void for vagueness.
Sad, sad, that anyone in America out side of the federal government would advocate that federal income taxes are owed by everyone. The income tax of 1909, 1913, was clearly a tax imposed on a excise activity. The U.S. Supreme Court has concluded that the income tax is a excise tax on federal corporate activity where a gain or profit is realized from the income invested. Individual American's do not owe this tax as already explained and a letter from a congressman to his represented district, stated to his constituent that the current code does not specifically state individual American's liability for payment of federal taxes, which means, that the IRS is criminally acting under color of law against the American people. Too bad so many refuse to educate themselves and retain their position as money slaves to the corrupt IRS which is in essence the "Federal mafia" as Irwin Schiff so described.

Information above with regards to Irwin Schiff and his protest of the federal income tax is wrongfully made. Irwin Schiff protested tyranny from the federal government , enforcing the tax law on non-federal persons according to subtitle C of 26 U.S.C. , I followed the instructions of Mr. Schiff and I can tell you I became a tax free individual of the federal income tax. Just last year (2015) I received a letter from my congressman, Congressman Dennis A. Ross telling me on his personal Washington D.C. letterhead the following: "Although the current code does not specifically state individual American's liability for payment of federal taxes....." Mr. Ross knows the same truth that Mr. Schiff knew, and that is that 26 U.S.C. does not apply to non-federal persons for payment of any tax in the tax code. Your statement above that "no legal argument against the tax has ever been upheld", and I'm sure you accept that fact because you who wrote the above never read a full transcript of a tax evasion or otherwise case, and in this case of Irwin Schiff, who was denied "due process" from the courts, over and over again. The federal courts are corrupt to the bone. If you don't know federal law then you should never condemn such a person as "Irwin Schiff" a true patriot of the American people. IRS publications have no force and effect of law and the stench that comes from the IRS about the income tax is nauseating. The IRS operates under "color of law" and that is how it succeeds in its criminal activity.