It's no secret that I'm a big football fan. I prefer the NFL because I like to yell at my teams and the players, and it just doesn't seem right to berate college kids, even if they can't hear me shouting at my TV.

I do, however, appreciate the special energy and enthusiasm that college gridiron match-ups generate.

The Ohio State-Rutgers game this past Saturday is a perfect example. The Scarlet Knights knew it was a big game, probably their biggest one this year, going up against top-ranked Ohio State.

Staying true to your school: So some Rutgers' fan took advantage of the Buckeyes coming to their Piscataway, New Jersey, home field to school the visitors a bit on the team and university.

The tidbits included that the university, founded in 1766, is the 10th oldest institution of higher education in the United States. Relevant to the events of the day, the Rutgers' fans also pointed out that the Scarlet Knights played in two of the top 10 games aired on ESPN and that the school plays in the #1 media market in the world.

And speaking of #1s, while Ohio State can bask right now in its #1 ranking college football team ranking, the Scarlet Knights hold a #1 that can never be matched. According to the poster, Rutgers played in the first college football game and won.

State support, too: But the Rutgers fans' boosterism didn't stop with the school. 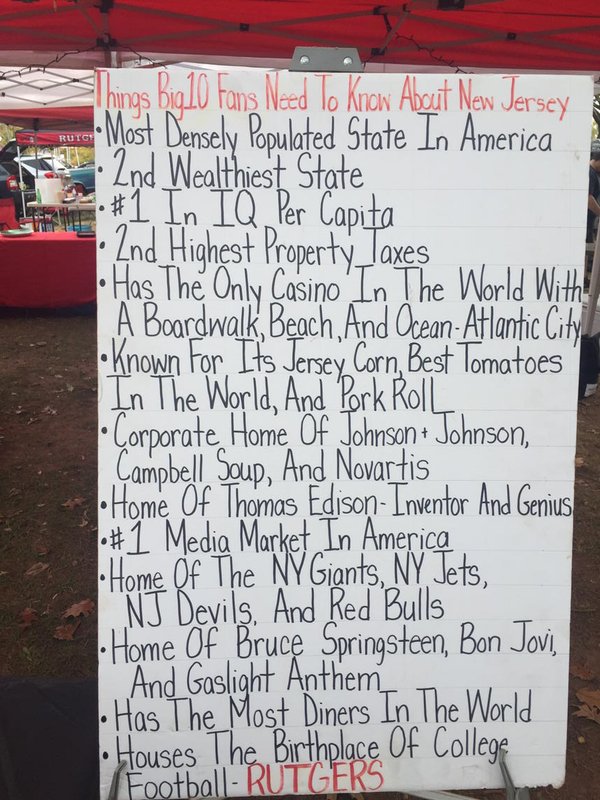 That's right college football fans from the Midwest, the Garden State's Atlantic City, N.J., has a gambling tourist trifecta: the only casino in the world with a boardwalk, beach and ocean.

The state is also home to a variety of professional New Jersey and New York sports teams, as well as the birthplace of rock 'n' roll's Boss, Bruce Springsteen.

But you know what, in my tax geek opinion, is the board's best boast: New Jersey has the second highest property taxes in the nation.

That's notable, for sure, although I suspect that's not something N.J. officials really likes to advertise. But, hey, whatever helps you get fired up for a football game, go for it.