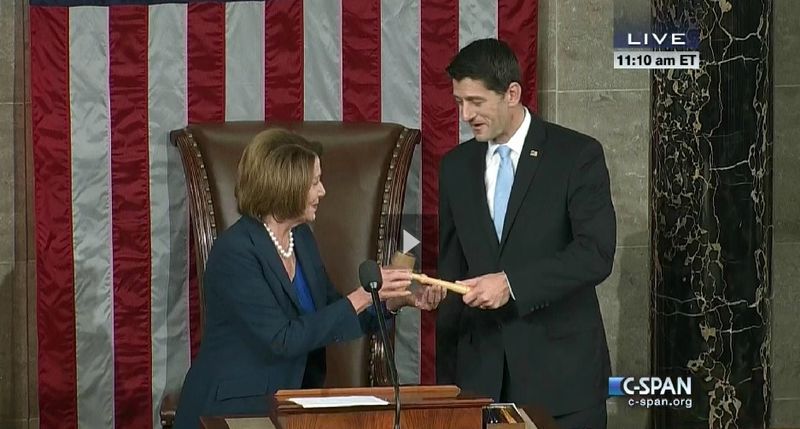 Ryan's closest competitor for the post was Rep. Nancy Pelosi (D-Calif.), who served as Speaker when the Democrats controlled the House. She got 184 votes.

Yep, you read right. Powell got a vote. It's not the first time. He has received Speaker votes in the last two leadership elections.

We don't know for sure who wrote in the retired four-star general's name, but technically it wasn't a throwaway vote since there's no requirement restricting the Speakership to a sitting member of Congress. Article I, section II of the Constitution says only that the House "shall chose their Speaker and other officers." Despite the option, House members have always opted to pick one their elected colleagues to lead them.

Strong committee leadership foundation: As Ryan takes over what has been in recent years a difficult and largely thankless job trying to corral an often raucous group of GOP Representatives, here are a few tidbits about the new speaker.

He's a money man. Ryan made his name as chairman of the House Budget Committee, where he was the key author of successive Path to Prosperity plans, aka the Republican answers to President Obama's annual budgets.

When this current session of Congress convened in January, he gave up the Budget role to chair the tax-writing Ways and Means Committee.

As head of the powerful tax-writing panel, he had looked to shepherd long-awaited changes to the U.S. tax code to fruition. If that does ever happen, Ryan will have a role as Speaker, but he no longer will be part of the nuts and bolts formulation of any changes. For a reportedly hands-on lawmaker, this will be quite a change for Ryan.

Ryan noted the importance of the committee process in his acceptance speech this morning, telling his House colleagues:

"If you know the issue, you should write the bill. Let's open up the process. Let people participate and they might change their minds. A neglected minority will gum up the works. A respected minority will work in good faith. Instead of trying to stop the majority, they might become the majority. In other words we need to return to regular order."

Ryan's words were welcomed by the conservative segment of his party that helped drive out Boehner. The predominantly Tea Party affiliated group known as the Freedom Caucus objected to Boehner's penchant, especially when facing legislative deadlines like the 2012/2013 fiscal cliff, for working with Senate leadership and the White House to write bills, like the just-passed two-year budget and debt ceiling bill, that then are presented to the House and Senate essentially as fait acompli pieces of legislation.

That's Paul D. Ryan to you: Ryan not only has a new title in the House, he henceforth will be known, officially anyway, by a slightly different name.

In anticipation of his election today (Oct. 29), Ryan on Wednesday (Oct. 28) asked the Clerk of the House to officially change his name to include his middle initial on all official documents and offices.

So we now have House Speaker Paul D. Ryan. His middle name is Davis.

Getting to know him: Back in 2012 when Ryan was tapped by Mitt Romney to be the Republican vice presidential candidate, I put together a little piece I called Paul Ryan potpourri.

With his election today to the House's top leadership post -- and in a nice touch, Romney watched the election from the House gallery -- here are those Ryan factoids and a few more in an updated Paul D. Ryan potpourri:

Now the list begins on what Ryan will accomplish as House Speaker.

And we also will keep an eye what his departure from Ways and Means will mean for taxes, both in the short term -- the extenders are still hanging out there -- and a larger tax code overhaul.