It breaks my heart as a fan to say this, but professional sports is business.

That's true not just for the owners, who look for ways to squeeze every penny out of their teams, but also for the players.

I've ranted and raved and yes, cried like a little girl, as I've watched my favorite players take the money and run to other teams. 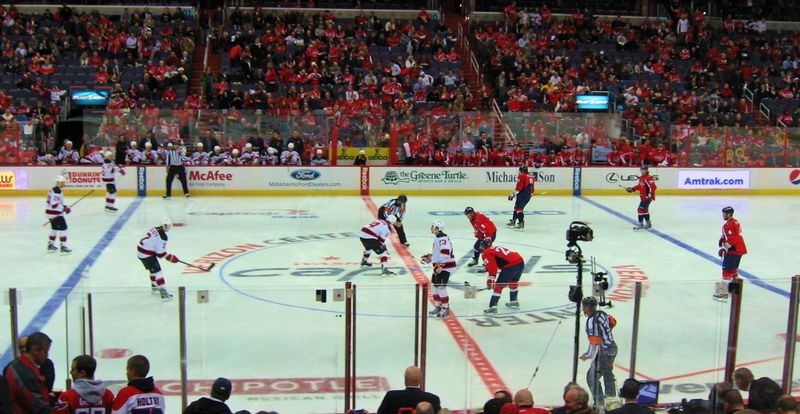 Game opening face-off between the Washington Capitals and New Jersey Devils on Feb. 21, 2013. The Caps lost 2-3, but the hubby and I enjoyed seeing our team skate again. Photo by Kay Bell.

In every instance, it was bigger contracts that literally moved them.

A new study, however, says that when it comes to National Hockey League players, taxes are a key motivation in changing on-ice sweaters.

The analysis, "Major Penalty for High Taxes: How High Income Taxes Drive NHL Players and Other High-Income Earners to Lower Tax Jurisdictions," was released to coincide with tonight's opening of the 2015-16 NHL season.

Dollars in, not taxes out: I'm not sure that's true. At least it wasn't back in 1990 when defenseman Scott Stevens, the Washington Capitals star who would become a bona fide NHL superstar and three-time Stanley Cup champion, signed with the St. Louis Blues.

Scotty wasn't thinking about taxes back then when he agreed to a four-year, $5.145 million deal, along with a $1.4 million signing bonus. He was thinking "I'm the highest paid defenceman (he is Canadian, hence the "c" instead of "s") in the league."

More recently, I watched Carlos Beltran jump from the Houston Astros in no-tax Texas to the New York Mets for a seven-year, $119 million deal. The all-star Major League Baseball outfielder subsequently went to the San Francisco Giants and St. Louis Cardinals before returning to the Big Apple, with its high city and state taxes, as a member of the Yankees.

By the way, Carlos, it was nice seeing you last night in New Yawk as your team lost to the 'Stros in the MLB Wild Card playoff game. But I gloat digress.

Then there's Josh Hamilton. He's playing post-season ball again with the Texas Rangers, but he left that income-tax-free team for a few years. The reason? More money from the Los Angeles Angels at Anaheim. That's Anaheim, California, a state known and often cursed for its hefty tax bills.

Are NHL players different? However, when it comes to the NHL, the joint report from Americans for Tax Reform, the anti-tax group founded by Grover Norquist, and the Canadian Taxpayers Federation, contends that professional hockey players are flocking to teams in jurisdictions with low or no income tax.

According to the two tax groups' report, when players with a no-trade clause -- this provision allows players to say yea or nay to trades to particular cities or teams -- did decide to change teams, 60 percent of them picked teams in U.S. states or Canadian provinces with lower taxes.

In addition, according to the study, 54 percent of unrestricted free agents who changed teams picked ones with lower taxes.

Overall, the report found that players moving to lower-tax jurisdictions will save more than $4 million.

"Successful hockey players can choose their team in free agency and thus, their hometown for tax purposes," said Norquist, president of Americans for Tax Reform. "So can millions of Americans and Canadians who move from high tax areas to low tax areas. Better than any poll, this tells us what taxpayers want: lower taxes and less government."

Other factors carry more weight: OK, I'll accept those numbers, but I'd like to hear from the players themselves that it was the destination's tax rate that prompted their moves.

Sure, paying less tax on your home game earnings is definitely nice.

But if that was truly the main reason for choosing to play in one state or city versus another, then no professional athlete would want to be a Los Angeles Dodger or King, San Francisco Giant, Anaheim Duck, San Jose Shark, New Jersey Devil, New York Ranger, N.J./N.Y. Giant or Jet, or a member of the aforementioned Angels or Yankees.

Yes, I know I left out some California and New York teams, but you get the picture.

Players want to win almost as much as they want money. So they'll go to a good team in a high-tax state as long as the dollars are there.

Plus, teams often structure contracts to make up for the taxes the athletes will have to pay.

Jock taxes, too: All professional athletes also end up paying a variety of taxes in many jurisdictions, not just their home arenas (or fields, parks or courts) thanks to the jock taxes assessed visiting players across the country.

Of the American states with NHL teams, only Texas, Florida, Tennessee and the District of Columbia don't have jock taxes. The three states don't have a state income tax on salaries. The nation's capital is prohibited by the Home Rule Act from imposing an income tax on non-residents.

To be fair, report author Jeff Bowes acknowledges that sometimes it's not necessarily about the taxes.

"The numbers don't lie; NHL players take a financial hit to play in certain jurisdictions," said Bowes, who is Research Director with the Canadian Taxpayers Federation. "Obviously, there are other factors at play besides taxes, but the fact remains that significant disparities in tax rates can penalize players when they move between teams."

The tax and money advisers also find ways for the athletes to legally shelter some of their outrageous salaries from Uncle Sam and his state tax collecting cousins.

So while taxes probably are a part of a player's contract considerations, they aren't the only or even the most important factor.

The possibility of celebrating a first or next championship and the dollars a title can add to their already ginormous salaries are what matter the most.

The late game in Canada is the Vancouver Canucks at the Calgary Flames. The hubby and I once owned a few shares of the 'Nucks, so we're yelling for them in this match-up.

Here in the United States, the defending Stanley Cup champion Chicago Blackhawks will hang their banner then face off against the New York Rangers.

And a battle of Northern and Southern California will close out this first day of the new NHL season, as the San Jose Sharks head to the Los Angeles Kings' ice.

The Law of Supply and Demand is not an opinion, it's as much of a law in economics as F=MA is a law of physics.

This is why governments are so often disappointed by the real bottom line results of raising taxes.

They first get a much smaller increase in net revenue than they estimated, because raising the price of doing business reduces the demand for creation of new business and expansion of existing businesses. Individuals looking for a new job will tend to favor looking in places that charge them less to live there.

That's if the government is lucky, it's not uncommon for a tax increase to reduce revenue significantly, the classic example being the 10% 'luxury tax' on boats and private airplanes introduced by Ted Kennedy and signed by GHW Bush in 1990.

This tax killed the New England boat industry, thousands of boat builder employees were laid off as a direct result of this stupid tax. Likewise the Kansas general aviation industry almost shut down for the same reason. Neither industry ever fully recovered from this punishing tax.

The GAO determined that this tax law cost more to administer than it generated in revenue since almost no luxury tax was collected.

Individual taxpayers and businesses will gravitate towards places that charge them less to live there. This tax was so insane the one of the first things Bill Clinton did when he took office was sign the repeal bill, even though Bill ran on a high tax platform.

Raise the cost of living and doing business WILL reduce the demand for individuals, businesses, and investors to live and do business there.

That's the LAW of supply and demand, and not even Bernie can change that.

What will be the net effect of revenue to the government that President Bernie will need to give all that free stuff be if he really raised the top rate to 92%?

Hello: As you noted about taxes, while not necessarily the primary reason for changing teams, it is still possibly an important consideration for a player looking at more than one offer. Another example , as noted by some journalists, is that the former Detroit Lion Ndamukong Suh may have went to play in Miami because of the lack of income and inheritance taxes. His six year, $114 million deal, looks a bit stronger when living in Florida.