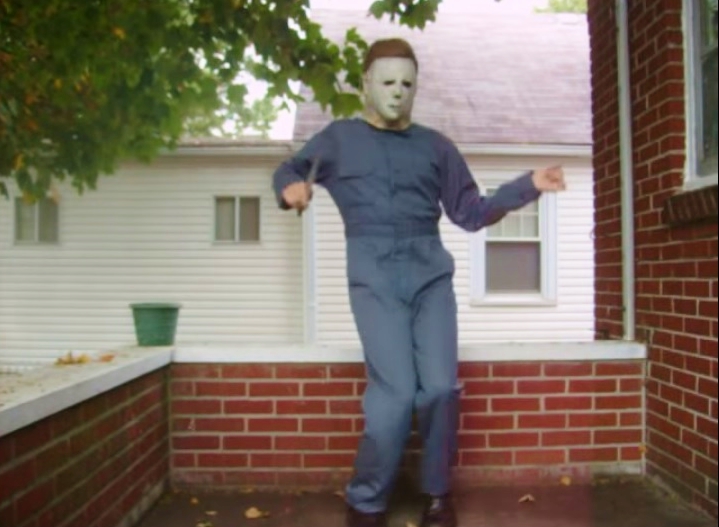 Michael Myers of "Halloween" film infamy is thrilled that Oct. 31 is finally here. Click image to see his happy dance.

Since the original "Halloween" movie debuted at the end of October 1978 (I was in one of those packed theaters in Lubbock, Texas), 10 sequels have followed, most of them involving franchise creator John Carpenter.

It cost Carpenter and crew around $300,000 almost four decades ago to bring the terror of Michael Myers to the big screen. The trademark mask the character wears was fashioned from a William Shatner Halloween mask purchased from a costume shop for just $1.98.

And from such humble beginnings was born a movie legend.

Thank goodness that today's big budgets and costly special effects weren't the norm in 1978 or we might not have had such a perfect "Halloween" film -- I'm talking the original here, not the follow-ups -- or its creepy, yet iconic, piano theme that Carpenter himself composed.

Cashing in on tax credits: Nowadays, movies tend to be much bigger and cost a whole lot more. And films, along with televisions shows, have become key economic components of many states' budgets. That's why states compete like crazy to get production crews inside their borders.

California recently bulked up its enticements to film and TV companies in an effort to bring back some of the Hollywood luster -- and money -- that in recent years has left the Golden State for production facilities across the country.

California lawmakers last year expanded the state's film and TV tax credit program that can shave as much as 25 percent off qualified production expenses. The funding for the program was tripled to $330 million, that's 1,100 times what it cost to make "Halloween" 37 years ago.

That increased amount earns this week's By the Numbers honor.

The California program also has been revised, making it easier for more projects to qualify. It's now open to new series for networks, premium cable outlets and Internet distribution, as well as pilots.

And the much maligned lottery system that California had used to allot the tax credits at random is gone. Now the tax credits are awarded based on how many jobs a project creates, spending on vendors and other criteria.

It seems to be working. State film officials recently announced that four programs that had filmed elsewhere are moving to California.

VH1's "Hindsight" is coming from Georgia. ABC's "Secrets and Lies" is moving across country from North Carolina. HBO's "Veep" is relocating from Maryland. And, fittingly for today, FX's "American Horror Story" is leaving Louisiana.

The four formerly out-of-state TV shows will divvy up $27.6 million specifically set aside for productions relocating to California.

Credits cut elsewhere: While California is sweetening the tax pot to get more movies and other projects back into the state, other jurisdictions aren't sold on the value of the tax breaks.

The state's film office can continue to administer existing contracts until they expire. That could be as long as three more years. However, the office cannot offer any new tax breaks or increase funding for existing film agreements.

Any money left over from the film incentive program after all contracts expire will revert to the state's general fund.

Tax credit advocates point to the many jobs created during filming, from carpenters and electricians to caterers and drivers. But critics, like Michigan officials, say those jobs don't last and that many studies indicate that states never recoup the tax revenue they parcel out via credits.

Snyder and those opposed to Michigan's film credit system believe the state still can attract productions without the tax breaks.

"It's important that we support creativity and innovation in our state, and we'll continue to have a Michigan Film Office to assist moviemakers and production staff," Snyder said. "Michigan has much to offer the movie industry, including top-notch talent and beautiful backdrops that will continue to draw filmmakers to Michigan even without taxpayer-funded incentives."

Scary Michigan movies: Before Michigan axed its film tax breaks, many popular scary movies were made within Michigan's borders. They include:

Now it's filmmakers who are screaming, both in horror about the demise of the Michigan (and potentially other state) production tax breaks and for joy at the added tax money from California.