It's been quite a day for John Koskinen.

The Internal Revenue Service commissioner appeared before a Senate Finance Committee hearing this morning to discuss that panel's final report, after almost 2½ years, on the tax agency's mishandling of ostensibly political groups' requests for 501(c)(4) tax-exempt status. You probably know it as the Tea Party scandal. 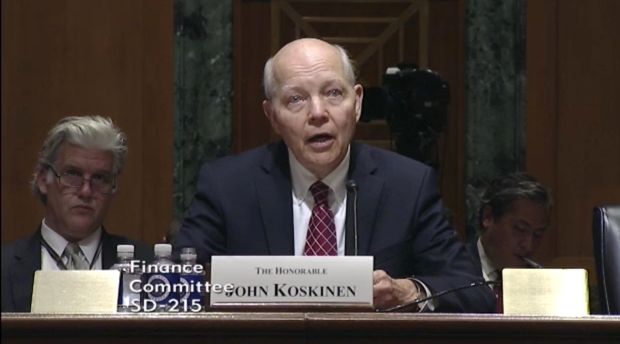 Mostly civil on the Senate side: It went as well as could be expected.

The interactions were mostly civil. Koskinen generally got all the uninterrupted time he needed to give his answers.

And Finance Committee Chairman Sen. Orrin Hatch (R-Utah) even wrapped up the two-plus-hour session by telling Koskinen that he appreciated the IRS' chief's efforts, the hearing's thoughtful discussion and "I have a high opinion of you [even though] I will get in trouble with the House by saying this."

Hatch was right about the House reaction.

House sailing not so smooth: This afternoon, Hatch's Utah GOP colleague Rep. Jason Chaffetz introduced articles of impeachment to remove Koskinen from his post. (Did Chaffetz give Hatch a heads-up?)

It's not the first time that Chaffetz, who chairs the House Oversight and Government Reform Committee and was briefly in the race for the Speakers' role that Rep. Paul Ryan (R-Wisc.) is expected to assume on Thursday, has sought to remove Koskinen.

In late July, Chaffetz and 20 of his committee colleagues wrote to President Obama asking him to fire the IRS chief.

Tired of waiting and no doubt incensed by the Department of Justice's decision last week not to prosecute Lois Lerner, the IRS executive in charge of the tax exempt division when the Tea Party targeting scandal broke, Chaffetz took matters into their own hands.

High crimes and misdemeanors detailed: The resolution, which has the backing of 18 other Republicans on the Oversight panel, charges that Koskinen violated the public trust.

Among the high crimes and misdemeanors cited in the resolution are:

The resolution also includes the full text of the original Treasury Inspector General for Tax Administration report that kicked off the tax-exempt investigations May 2013.

Public confidence concerns stated: "Impeachment is the appropriate tool to restore public confidence in the IRS and to protect the institutional interests of Congress," Chaffetz said in announcing this move. "This action will demonstrate to the American people that the IRS is under repair, and signal that Executive Branch officials who violate the public trust will be held accountable."

Koskinen appeared unfazed at an IRS conference of tax professionals in July following Chaffetz's initial call for his firing. That combative attitude is part of why so many in the GOP dislike the IRS chief.

It's also why Koskinen will likely do all he can to keep his job.