Married? Filing a joint return? Then make sure both spouses sign the 1040 or prepare to pay tax penalties

Marriage means doing things together, even things you hate, like visiting the in-laws, cleaning out the garage and filing taxes.

You might be able to let those first two slide, but when it comes to taxes, no such luck.

Most couples file a joint tax return. That single Form 1040 is a legal document and if you ignore filing it or mess it up, you'll face consequences worse than your spouse's wrath. 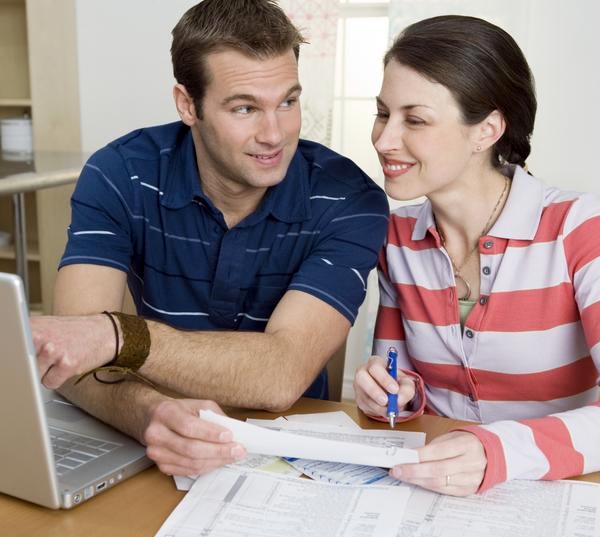 Her forced smile makes me think she's not buying what he's saying as they work together on their joint tax return.

The Internal Revenue Service considers both spouses equally responsible for all the taxes due -- known as joint and several liability -- on that one shared return.

The IRS also demands that both spouses sign that single Form 1040 or it's not an acceptable filing.

That dual signature requirement was underscored in a recent U.S. Tax Court ruling.

One couple, one signature, many return troubles: In 2001, a Massachusetts husband and wife got their extended 2000 tax year return back from their CPA for them to review, sign and file.

But as so often happens in married life, one spouse does something and the other doesn't; no implied dig at the hubby here or judgments of other happily marrieds' situations, just a statement of fact.

In this couple's case, he signed the 1040 and put it in stack where he usually placed documents that required her attention and/or signature. But she never signed the tax return and he went ahead and sent the form, bearing only his John Hancock, to the IRS. He apparently thought she had signed it, saying that he didn't remember checking for her signature before mailing the return.

The IRS, however, did check and noticing only on valid signature on a return filed using the married filing jointly status sent the document back to the couple, along with a delinquency notice.

Things then escalated. In 2004, the IRS began an audit of the couples' returns for tax years 2000 through 2005. All of these issues can be traced back to the 2000 tax return that the IRS considered unfiled and ultimately late filed because of the missing signature.

2 exceptions to 2 signatures: The issue that the U.S. Tax Court had to decide was whether a purported joint income tax return with only one spouse's signature was a valid tax return.

There are two exceptions to this rule, as laid out in Section 6061.

The first is when one spouse acts as an agent of the other, e.g., acting with a legal power of attorney, and complies with those rules.

The second is when one spouse is physically unable to sign due to disease or injury.

Neither of these exceptions applied in this case.

The Tax Court noted that return signatures are an important because they "not only verify that a return has indeed been filed by the person indicated on the front page of a Form 1040 but also certify that all the statements in the tax return are made under penalty of perjury and are true, correct, and complete to the best of the taxpayer’s knowledge." Remember that "penalty of perjury" line on the 1040 that precedes the signature line?

The couple acknowledged the need for two signatures, but pointed to two tax situations -- the substantial compliance doctrine and the tacit consent doctrine -- that could apply to their case.

Court counters compliance argument: The basis of the substantial compliance doctrine is that a tax return need not be perfect in order to be valid. Basically, as long as a document meets four distinct elements -- it has sufficient data to calculate tax liability; it purports to be a return; it was filed in an honest and reasonable attempt to satisfy the law; and it's filed under the penalties of perjury -- it is a valid return.

The couple argued that even without the wife's signature, their 2000 return was valid because it met all those elements.

To this argument, the Tax Court said too bad. The court noted that although tax law is "complex and confusing to most of us," the signature requirement is not complicated. The court said it would be "inappropriate" for it to "use its power to create a potentially unlimited exception to a well-established and fairly simple rule."

The "substantial compliance doctrine is not intended and should not be used to justify a failure to comply with simple and clear requirements," said the court.

Tacit consent explicitly shot down: As for the tacit consent doctrine, the couple argued that their return should be valid because they intended to file a joint tax return.

Yeah, I've heard that excuse explanation from the hubby before. It went over as well with the Tax Court as it does with me.

"[T]he intent to file a joint return is different from signing a document under penalty of perjury, and the two do not supplement or replace each other," said the court.

Plus, acceptance of the tacit consent argument could "expose a nonsigning spouse who never intended to sign a joint tax return to the burdens of litigation that could span many years when that spouse did not in fact attest to the veracity of the statements on the tax return," a possible situation the court characterized as "unfair."

The bottom and tax return signature lines are that both husbands and wives need to sign their joint tax returns or face possible penalty consequences.

Nonfiling, nonpaying penalty possibilities: The couple essentially faced nonfiling penalties for not sending in a valid tax return by the filing deadline.

This is one of three common penalty situations that many taxpayers encounter every year. They are:

While most taxpayers think not paying is the worst tax noncompliance case, the IRS actually penalizes folks more for not filing (or filing late) a tax return. No one really seems to know why this is the case, but the consensus among tax experts is that the IRS thinks that once it knows know where you are via your form filing, it can eventually get at least some of what you owe.

The best advice is to file your return, either by April 15 or the extended due date of Oct. 15, even if you can't pay all you owe. That will keep you out of nonfiling trouble.

When you file, pay at least something, even a minimal amount, to show that you're trying to meet your tax responsibilities. Then work with the IRS to set up a payment plan. That will lessen your nonpayment penalty.

Underpayment tax penalty: The third common tax penalty situation is not paying enough tax throughout the year. This usually happens to folks who get income that isn't subject to payroll withholding, such as investment earnings or payments for self-employed contract jobs.

The U.S. tax system is based on a pay-as-you-earn principle, which gets Uncle Sam money throughout the year to meet his bills. Folks who don't pay taxes from salaries subject to withholding must meet this requirement by making estimated tax payments.

If you don't send in enough with each of these four extra filings, then you could face the underpayment penalty even if you ultimately paid your full tax bill. This penalty essentially is designed to keep folks from simply waiting until the last filing moment to pay their taxes in a lump sum.

While the IRS is happy to get the money, it would rather have it throughout the year. Hey, as a self-employed person, I certainly understand this. I like getting paid for my work as I do it, rather than waiting for clients to pay me all they owe at the end of the year.

These three tax-penalty situations and how to avoid them are discussed in this week's Weekly Tax Tip.

Check out the tip so that you don't end up paying the IRS even more due to tax penalties.