Halloween horrors arrived a day early here in Central Texas. I was awakened around 5:30 a.m. by my phone's weather alert app screaming out warnings about possible floods, lightning and even a tornado.

As soon as insane intrepid photojournalists were able to send their video feeds, we were seeing things like this creek starting to come over a bridge in Wimberley, a community south of Austin that was hit hard by flooding this past Memorial Day weekend. 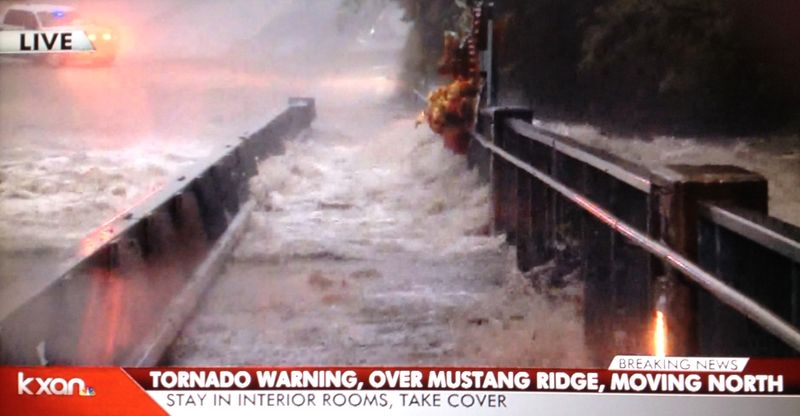 About an hour later, the water had overtaken the bridge, along with some local Halloween decorations. 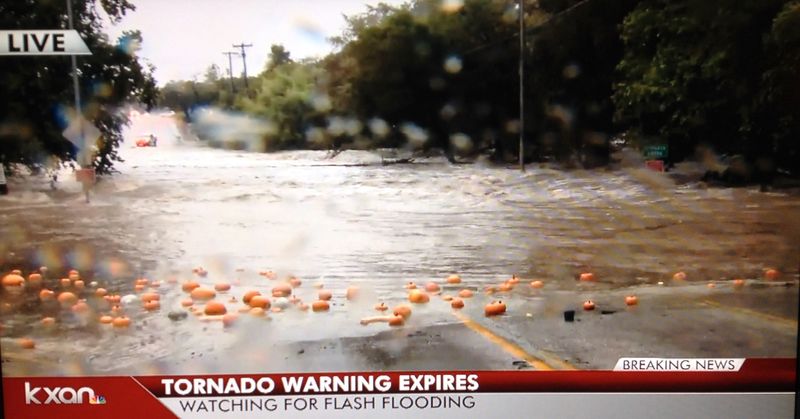 Cypress Creek in Wimberley, Texas, now over the bridge on Halloween Eve 2015.

Severe weather typically happens in the spring. But then, Mother Nature can be a bitch unpredictable. Halloween two years ago, a neighborhood southeast of Austin was devastated by flooding.

The hubby, not a morning person on the best of days, has gone back to bed to try to catch a bit more sleep. I'm too wired, having watched local weathermen's cones predict when tornadoes, a couple Doppler radar indicated and two other funnels sighted on the ground, might come way too close to our house.

Not to press our luck, but it looks like we're now safe. But another round of potentially severe storms is forecast for early Saturday. Note to self: go to bed early tonight.

Ready, set, go bag: Having living through numerous hurricanes and tropical storms during our six years in South Florida, including the incredible four-hurricane-landfall year of 2004, at least we're ready.

We have a go bag, which is still sitting in our downstairs bathroom, the most interior, lowest level room in our nonbasement house.

It's a good idea for everyone to make such preparations, especially if you live in a region that's subject to particular types of severe weather. But remember, catastrophes can happen anytime, anywhere.

The ol' blog's special Natural Disasters Resources page contains a collection of posts on preparing for storms, both physically and financially; recovering from them, in many cases taking advantage of tax help in disastrous times; and helping out folks who are disaster victims.

Yeah, it's a cliché, but these sayings get repeated because they're true: Be prepared. And stay safe.