As the global refugee crisis continues to grow, Pope Francis has a warning for churches.

Open your doors to these displaced people or pay taxes. 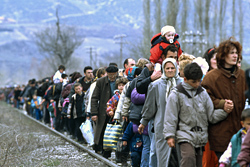 The Pontiff's message about caring for those in need shouldn't come as a surprise. He has spent his life ministering to the poor and he's carried that message with him as the head of the Catholic Church.

But his no-nonsense assessment of how some churches take tax advantage of their special status has taken some aback.

Heavenly guidelines for worldly acts: "On Judgment Day we already know how we will be judged," Pope Francis said in a wide-ranging interview with veteran Catholic journalist Aura Miguel of Portugal's Radio Renascença.

"It is written in chapter 25 of the Gospel of Saint Matthew. When Jesus asks you: 'I was hungry, did you feed me?' you will answer, 'Yes.' … 'And when I was a refugee, did you help me? Yes.' So I congratulate you: you will pass the test!" the Pope said.

That ultimate test has taken on here-and-now meaning with the recent flood of refugees fleeing war-torn Syria. European nations are struggling with how to absorb the people seeking relief. The United States is expected to accept 8,000 to 10,000 refugees in the coming months.

The big question is how will these folks be accommodated?

"What I asked was that in each parish and each religious institute, every monastery, should take in one family," Pope Francis told Radio Renascença. "A family, not just one person. A family gives more guarantees of security and containment, so as to avoid infiltrations of another kind."

He's not asking each parish priest to put up a family, although I'm sure the Pope would be fine with that.

But he is recommending that each parish make good use of all its facilities to house refugees.

"Each parish community should see if there is a place, a corner in the school which can be turned into a small apartment or, if necessary, that they may rent a small apartment for this family," said the Pope. "There are convents which are almost empty."

Church-based hotels and taxes: The response, however, has not been as enthusiastic as Pope Francis hoped. It seems that some religious orders have more worldly concerns.

"There is also the temptation of the god money," he told the radio audience. "Some religious orders say, 'No, now that the convent is empty we are going to make a hotel and we can have guests, and support ourselves that way, or make money.'"

That's cool. But the Pope says in those cases, the religious orders need to rethink their tax-exempt structures.

"Well, if [making money off church facilities] is what you want to do, then pay taxes," Pope Francis said. "A religious school is tax-exempt because it is religious, but if it is functioning as a hotel, then it should pay taxes just like its neighbor. Otherwise it is not fair business."

I know being Pope is a full-time, lifetime job, but if Francis ever decides to make a career change, I know a lot of tax offices that would welcome him in a heartbeat.