Attention Maryland residents. If you paid taxes to another state between 2011 and 2014 and were denied a tax credit for your county piggyback taxes against the out-of-state payments, the Old Line State is now handing back the money you're due. 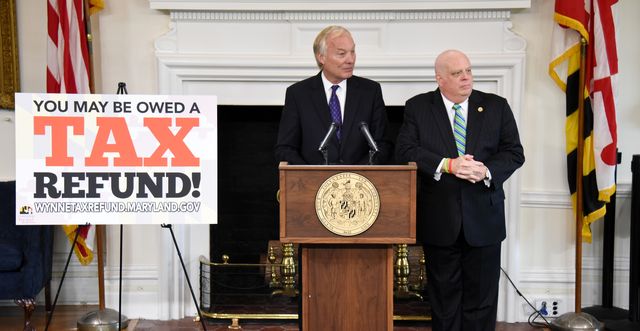 In May, the U.S. Supreme Court ruled that Maryland improperly denied some tax credits for other states' taxes that Old Line State residents had paid to other jurisdictions.

State AND county taxes count: Maryland had allowed the credit against the state's tax on returns filed between 2011 and 2014, but refused the credit for the piggyback county, and Baltimore City, taxes that Marylanders also pay.

The country's top jurists said credit had to be applied to all taxes. The Supreme Court-ordered change of tax credit heart could apply to around 55,000 taxpayers, with the total amount to be refunded estimated to be more than $200 million.

Franchot said on Monday, Sept. 28, that his office has so far processed more than 4,000 tax refund claims amounting to $53 million.

To help those who are due refunds because of denied county/Baltimore City tax credits, Maryland has created a special Web page, http://www.wynnetaxrefund.maryland.gov.

Eligible Maryland taxpayers won't be contacted by the comptroller office's or receive their refunds automatically. So if you're due the county tax credit refund, check out Maryland Web page and get to filling out the form necessary to get your tax money.

Counties to take refund hit: Maryland is covering these additional tax credit checks thanks to a reserve fund set aside to pay tax refunds. Local governments will, however, pay the money back.

Montgomery County, whose southern boundary is Washington, D.C., is expected to absorb the largest financial hit. It's estimated that the county, Maryland's largest, will lose about $100 million in local revenue due to the refunds.

The state did, however, see the court's ruling against what amounted to double taxation coming.

In 2014 the General Assembly passed legislation that cut interest rates on refund claims connected to the legal action originally filed by brought by Maryland residents Brian and Karen Wynne.

Under the new law, the interest rate dropped from the statutorily provided 13 percent for taxpayer refunds to an interest rate equal to "the average prime rate of interest quoted by commercial banks to large businesses" in fiscal 2015, which is 3.25 percent. That's almost 10 percentage points lower than what Wynne credit refund beneficiaries would have received if the law hadn't been changed.