Conservationists love the vehicles. So do automakers, who have embraced new technologies as a way to expand their markets. And governments, both at the federal and many state levels, have supported alternative fuel automotive options through tax breaks.

The most popular tax break was the federal tax credit for hybrid vehicles. Now the energy saving fuel du jour is electricity. 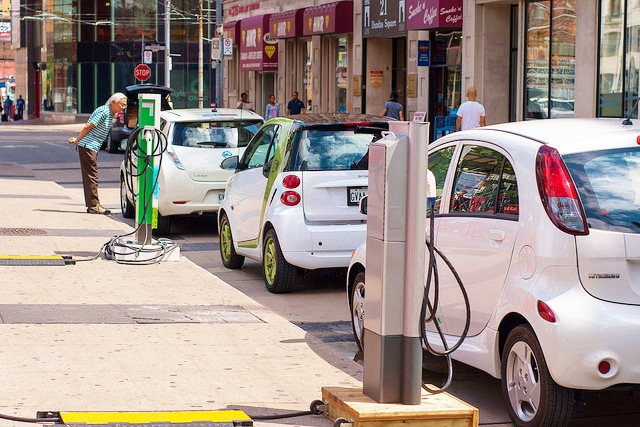 My concern about buying an electric car is finding a recharging station. That's not a problem for the owners of these electric cars charging along an Ontario, Canada, street. Photo courtesy EVObsession.com.

Hybrids, electric autos and tax breaks: During the height of the hybrid craze, the tax credits were snapped up, often by celebrities.

Less famous drivers also bought beau coups Prius, too. But they shared one thing with the Hollywood owners. They made more money than most of us.

That's the case, too, for electric vehicle owners.

That's not surprising. Although the prices for some models have come down, new technology autos tend to cost more than standard gas-fueled vehicles.

Most energy credits go to richer taxpayers: So it's also no surprise that the beneficiaries of energy saving tax credits of all types are wealthier.

These various tax breaks for energy-savings programs have gone predominantly to higher-income Americans, according to the two University of California, Berkeley, professors' review of tax return data and found.

Only 10 percent of those in the bottom three income quintiles claimed credits, according to the paper, while those in the top quintile received about 60 percent of the credits. And when it comes to car tax credits, the difference is even more marked.

"The most extreme is the program aimed at electric vehicles, where we find that the top income quintile has received about 90 percent of all credits," write Borenstein and Lucas.

In dollars, the income threshold cited in the paper for energy efficiency credit benefits is $75,000 or more.

Big tax break for big alt fuel expenditure: As for Qualified Plug-in Electric Drive Motor Vehicles as they are officially known in the Internal Revenue Code, the tax credit can be as much as $7,500.

The tax credit -- which, remember, is a direct reduction in the amount you owe Uncle Sam -- is available for both passenger vehicles and light trucks, aka vans. It also can be claimed by individuals who buy or lease an eligible vehicle.

There are a lot of familiar automotive names on the electric vehicle tax credit eligibility list: 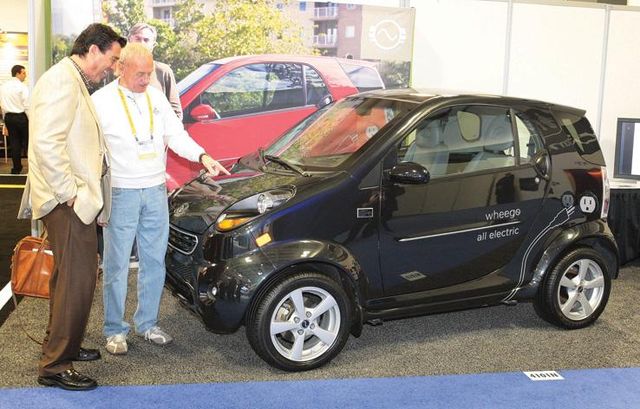 Wonder what these guys are chuckling about as they look at a Wheego Whip. My guess, "My kid's bike tires are bigger than these!" Still, many drivers are not as averse as I am to tiny electric autos.

And there are a lot of companies that most of us have never heard of:

Cancel the car credits: Personally, I'm not a fan of auto tax credits. As I noted last week at my other tax blog, tax breaks for specific products essentially are marketing help from Uncle Sam. That's not where our tax dollars need to be spent.

"There may well be political considerations that continue to favor tax credits, but this approach comes at real cost, both in terms of efficiency and equity," write the duo in their paper.

In the case of the tampered-with VW diesels, alternative fuel tax credits for autos that didn't qualify cost us taxpayers millions of dollars.

My other tax thoughts usually are posted at Bankrate on Tuesdays and Thursdays. If you miss them there, look for a quick review and links here the following weekend.