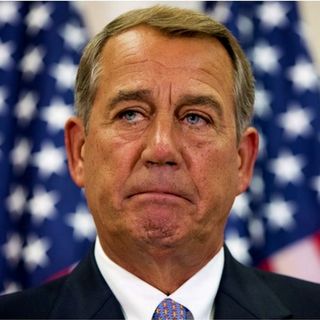 House Speaker John Boehner swears it wasn't a literal come-to-Jesus talk he had with Pope Francis that led him to announce today that he's resigning his Ohio House seat, and thus the U.S. House leadership post, at the end of October.

We'll take the soon-to-depart Republican Speaker at his word. He is, after all a devout Catholic, so he wouldn't be making up stuff so soon after spending face time with the head of his global church.

He did acknowledge, however, that he took the Pope's words to heart.

At his press conference this afternoon, during which Boehner was in good spirits (he entered the press room singing the Disney tune "Zip-a-Dee-Doo-Dah"), he referenced the Pontiff's call that Congress follow the Golden Rule.

Who's next? Boehner's surprise announcement does leave a lot of questions. But right now I'll focus on just one since we have a least a partial answer to it.

In an official statement, Ryan called Boehner "a great leader of the Republican Party and the House of Representatives," and characterized Boehner's resignation as "an act of pure selflessness."

What about taxes? OK, unlike Boehner, I lied a little bit. I have another question to address.

What effect(s) will this shake-up in the GOP leadership have on tax legislation?

2015 is ticking down and time is short for any substantive tax action this year. Realistically, the odds for tax reform were tiny when the legislative year began.

So we're looking at the fate of the tax extenders.

The House Ways and Means has passed many of the temporary tax measures as separate bills, and a handful have cleared the full House. The Senate, however, has stuck with the traditional method, passing a comprehensive extenders package that is awaiting full Senate action.

And some Ways and Means Democrats reportedly are saddened by Boehner's departure.

Their fear prediction is that a more conservative GOP speaker supported by the party's more right-wing Representatives will make compromise on taxes and all matters more difficult.