I love Florida, but this week made me really glad we no longer live there. I don't think my nerves could deal with the gyrations of the stock market and a tropical storm.

Hurricanes and the financial markets share a lot of similarities.

There are global implications and instigators in both phenomena. Tropical Storm Erika, now pounding the northern Caribbean, started off the west coast of Africa. It was China's market meltdown that led to this week's U.S. stock drops.

Tropical Storm Erika, shown here on National Hurricane Center GOES radar, hit the Dominican Republic on Friday afternoon. The big question is where does she go from here?

And while you can get a general handle on where your investments or a storm system might go, both sometimes take off on their own, confounding you and all your plans.

The east coast of Florida was on high alert early this week, with my old Palm Beach County stomping grounds an early landfall target.

Then Erika shifted east and it looked like the storm would just graze the peninsula. Then she wobbled back west, putting the center of the Sunshine State in the cross hairs.

Now, Erika has decided to head due west for a while.

See, just as frenetic as the stock markets!

Will the new move westward mean that the Gulf Coast of Florida will take the hardest hit? Or could the wobble push her fully into the Gulf of Mexico next week, as some models now show?

Spaghetti run models are diverging a bit on where Tropical Storm Erika will go next.

Or will the mountains of Hispañola tear Erika apart completely? We just don't know.

Florida officials aren't taking any chances, especially since the storm has claimed 12 lives so far. The Sunshine State governor has declared a state of emergency.

With or without official action, the best any of us can do is prepare for the worst. Just in case. And soon. Like now.

Pacific threats, too: That same advice goes for folks in Hawaii.

As the Weather Channel screen shot below shows, there are three tropical systems in the Pacific right now, with Hurricane Ignacio, a category 1 storm, heading uncomfortably close to our 50th state. 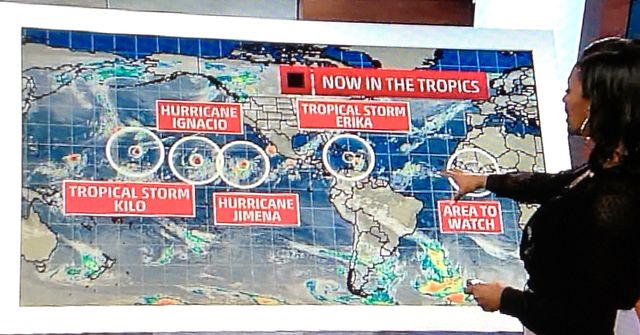 And don't think you're off the dangerous weather hook just because you don't live in a coastal area during hurricane season. After the storms make landfall, they travel inland, often bringing devastating floods.

Plus, there are myriad natural disasters that can strike anywhere, any time.

You can find lots of information on how to prepare, both physically and financially -- including tax help if you are a storm victim -- for any natural catastrophe at the ol' blog's special Natural Disasters Resources page.

Check it out. Be ready. Stay safe.