Art and life have intersected once again, this time on Broadway.

The hot new show on the Great White Way is "Hamilton," the musical about the United States' first Treasury Secretary Alexander Hamilton.

It's getting rave reviews not just from the critics, but also the public, including some guys who have a special perspective.

Three Treasury Secretaries, two former and the current, have been to see the show.

Treasury Secretaries who've attended the Broadway musical "Hamilton" about the first man to hold their job include, from left to right, Timothy F. Geithner, who served from 2009-13; Robert E. Rubin, secretary from 1995-99; and Jacob J. Lew, who's held the post since 2013.

Timothy F. Geithner, the nation’s 75th Treasury secretary, was an early attendee. He made it to a performance while the musical was drawing crowds to the Off Broadway Public Theater.

Last week, Robert E. Rubin, the 70th Treasury secretary, and current Hamilton successor Jacob J. (Jack) Lew, were at the same performance. They timing was just a coincidence; they were at the Richard Rodgers Theater separately.

"If you’re secretary of the Treasury, in your outer office is a big picture of Alexander Hamilton, and there is a strong sense of Hamilton in the building," Rubin told the New York Times. "His sense of fiscal responsibility is still alive in the Treasury. People do identify with Hamilton." 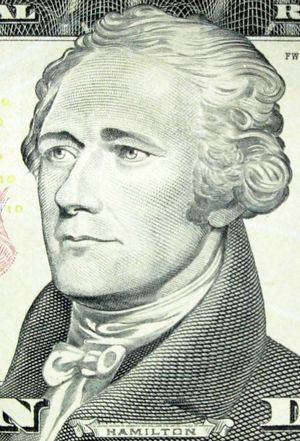 Hamilton's currency status: You might think Lew wouldn't necessarily be welcome since he's supporting an effort to feature a woman on the $10 bill, which currently bears Hamilton's face.

The change to the currency, however, doesn't mean the first Treasury Secretary will be forgotten.

"There are a number of options of how we can resolve this," Lew told Politico this summer. "We're not taking Alexander Hamilton off our currency."

That promise, from the man who's the ultimate chief of the Internal Revenue Service, earns the $10 bill this week's By the Numbers honor.

The enthusiasm was mutual.

"The show was excellent," Lew told the New York Times by email, calling it "an inspired way to bring to life for so many people an important part of our history."

Lew elaborated in a conversation with New York Magazine's Annie Lowrey, who recounted the exchange in the magazine's Daily Intelligencer blog:

"I thought it was really outstanding. It was wonderful theater, a quite ingenious adaptation of a great biography to the stage, which if you had tried to imagine it without seeing it — most of us couldn’t even imagine it. Just as theater, it was really tremendous.

The part I found particularly impressive was how they took the story of Hamilton — which is a complex story, and not an easy piece of history — and captured the essence of a long, complex, and important biography. And they put it in a form that is accessible to so many more people. There’s part of me that's always particularly happy when important ideas about American history become more accessible, and it showed the contributions that Hamilton made not just to the financial system, but to our political system as well."

After-show plaudits all around: As for the post-performance meeting with "Hamilton" writer, composer and star Lin-Manuel Miranda and the rest of the cast, Lew said the actors "were excited about the juxtaposition of the first and current Treasury secretaries sharing the stage."

The performers, Lew said, also "kept coming back to the importance of bringing history to a broader audience, and they talked about raising money to bring more students to future shows, to open it up in an accessible way to expose more people to a very important chapter of our history."

It sounds like a fun time was had by all. It will be interesting to see if other Washington, D.C., officials show up to take in some historically themed theater.

One Congressman, however, might not be that interested. Sen. Richard Burr (R-N.C.) is a descendant of Aaron Burr, who killed Hamilton in a duel.

"Needless to say, Aaron Burr is not the hero of the play," noted Lew.