Taxes as a weapon of mass destruction in historical thriller

Summer's almost over, but there's always time for some recreational reading. Tax geeks who enjoy thrillers might want to check out "The Patriot Threat." 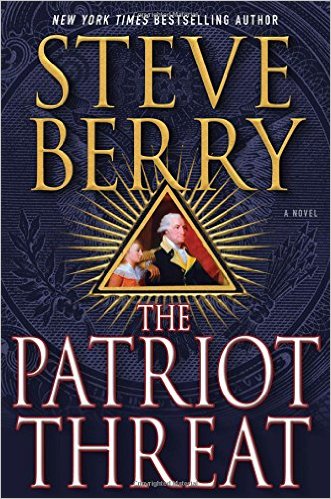 Author Steve Berry says he looks for a "cool thing from history" as the core premise in each of his novels.

In "The Patriot Threat," the 10th in his Cotton Malone series, Berry uses the ratification in 1913 of the 16th amendment.

You know this one. It's the constitutional language that created the income tax.

What if someone found a way to use the destruction of our income as a weapon to bring down America, asks Berry, both in the book and in a recent interview with Lis Wiehl on her Wiehl of Justice radio show.

"We get 90 percent of our revenue from the income tax and what if we can turn that against the country?" Berry told Wiehl. "It's fascinating to find out that something that happened in 1913 could actually still be detrimental to us today."

Sounds like that in addition to researching tax history, Berry's been watching Congress and the escalating 2016 presidential campaigns!

I haven't read the book, but Berry says it moves quickly, taking place in 23 hours (one better than Jack Bauer!).

Here's the synopsis from the publisher Minotaur Books:

The 16th Amendment to the Constitution is why Americans pay income taxes. But what if there were problems associated with that amendment? Secrets that call into question decades of tax collecting? In fact, there is a surprising truth to this hidden possibility.

Cotton Malone, once a member of an elite intelligence division within the Justice Department known as the Magellan Billet, is now retired and owns an old bookshop in Denmark. But when his former boss, Stephanie Nelle, asks him to track a rogue North Korean who may have acquired some top secret Treasury Department files -- the kind that could bring the United States to its knees -- Malone is vaulted into a harrowing twenty-four hour chase that begins on the canals in Venice and ends in the remote highlands of Croatia.

With appearances by Franklin Roosevelt, Andrew Mellon, a curious painting that still hangs in the National Gallery of Art, and some eye-opening revelations from the $1 bill, this riveting, non-stop adventure is trademark Steve Berry -- 90% historical fact, 10% exciting speculation -- a provocative thriller posing a dangerous question: What if the federal income tax is illegal?

Just to make it clear so I don't feed any tax denier fantasies, this book is a novel. That's fiction, as in not true, totally made up.

I'm not sure I'd read all the Cotton Malone books. My bookshelves and iPad already are jammed, with plenty of paper and digital items I've yet to crack.

But because taxes, I just might add "The Patriot Threat" to my collection.