PBS is losing a beloved resident. Sesame Street, which debuted on public television in 1969, now will be seen on HBO, the premium cable channel heretofore best known for decidedly adult dramas. 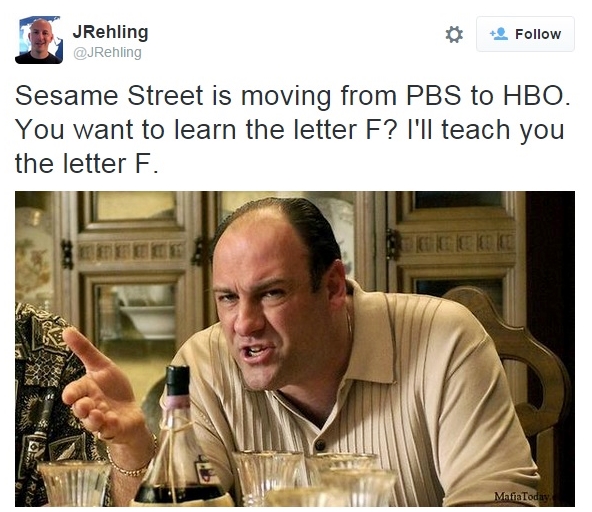 HBO star Tony Soprano, played by the late James Gandolfini, welcomes Sesame Street viewers in his own inimitable way to the premium cable network in @JRehling's Twitter take on the channel change.

There is, however, a tiny bit of good news for PBS and families who rely on that broadcast outlet for their kids' entertainment. Old Sesame Street episodes will still be available on PBS. And the new episodes will appear on public TV stations nine months after they air on HBO.

HBO, PBS similarities, differences: When you think about it, PBS is a lot like HBO. Really.

Both channels are commercial-free, at least during the programs, and they rely on viewer funding.

In HBO's case, the money come from subscriber fees paid to viewers' television providers. In PBS' case, the money arrives, generally during special pledge periods, as tax-deductible donations from the networks' fans.

The new channel address, however, will demand parents pay close attention to the remote. We wouldn't want any kiddies tuning in to see the fuzzy red Elmo to instead find a replay of Game of Thrones' Red Wedding episode.

It's just business: Many, including child-free me who grew up (geez alert!) with Captain Kangaroo, are sad to see such a program leave public television. Sesame Street has always seemed more like a public service rather than simply a fun and educational way to enjoy Muppets. 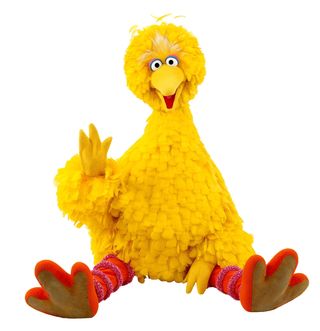 But it's more than either of those. Bringing Big Bird and his human and puppet pals to the masses is a business.

And Sesame Workshop, the nonprofit that produces the children's show, says that PBS paid less than 10 percent of the show's costs. Most of the company's money comes from licensing revenue, such as DVD sales.

The five-year HBO deal, said Sesame Workshop CEO Jeffrey D. Dunn in the statement announcing the programming change, will provide the company "with the critical funding it needs to be able to continue production of Sesame Street and secure its nonprofit mission of helping kids grow smarter, stronger and kinder."

With the pay-TV money, Dunn noted that the HBO deal means that Sesame Street will be able to produce almost twice as much new content in each season, going from 18 shows to 35 shows a year. Sesame Workshop also will create a Sesame Street spinoff series, as well as another new educational series for children.

Deductible donations to PBS: Even if you get HBO or plan to add it now that it's the new home of Bert and Ernie et al, consider sending a few bucks to PBS, too.

While the children's classic has moved, PBS still is home to lots of other good entertainment, like Nature, Frontline, Nova, Austin City Limits, Mystery, Antiques Roadshow and the various versions of Masterpiece Theatre, including Downton Abbey.

And if you itemize, your gift to PBS and/or your local public TV channel could provide a nice tax deduction as long as you follow the Internal Revenue Service charitable donation rules.