Seattle's new tax on guns and ammunition had one unchallenged weekend.

The law establishes a tax of $25 for every firearm sold, as well as a tax of 2 cents for every ammunition round of .22 caliber or less and 5 cents for every other round of ammunition. In addition to the new gun taxes, the city also approved mandatory reporting of lost or stolen firearms to the Seattle Police Department. 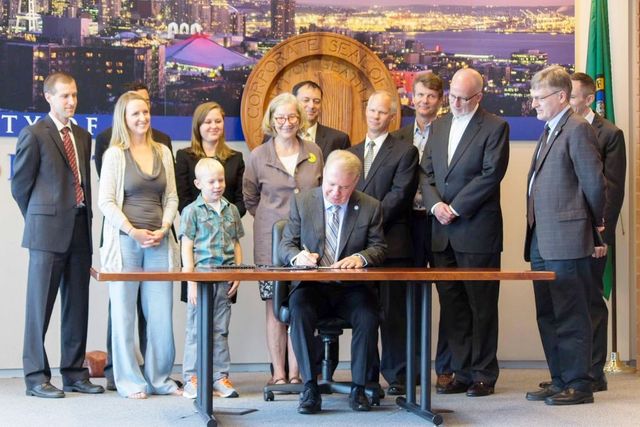 Seattle Mayor Ed Murray signed both bills into law on Friday Aug. 21. On Monday, Aug. 24, the mayor and the rest of the city's officials were served with a lawsuit challenging the new tax law.

The National Rifle Association, Second Amendment Foundation and National Shooting Sports Foundation, along with Seattle firearms retailers Outdoor Emporium and Precise Shooter LLC and two private citizens, contend that the city has no authority to enact such a law.

State vs. local regulations: "Anti-gun activists in Seattle have chosen to violate the Washington State Constitution and trample upon the Second Amendment rights of law-abiding citizens," said Chris Cox, executive director of the NRA's Institute for Legislative Action. "It's a shame to see such a waste of public resources on issues the courts have already ruled to be a clear violation of state law."

The legal action, filed in King County Superior Court, cites Washington State's 33-year-old preemption statute, which gives the state legislature sole authority for firearms regulation. Simply couching the gun control as a tax does not change the fact that it is a local effort to regulate weapons, say opponents of the law.

Not so, say Seattle officials.

Under state law, say the law's supporters, cities have the authority to tax sellers of a good by volume of the goods sold. And while there are state limitations on regulations imposed by local governments, taxation and regulation are viewed legally as distinct functions.

"Our tax legislation that we passed does not in any way control the sale, purchase, possession, or use of firearms," said Seattle City Council President Tim Burgess, who authored the legislation. "This is done under our taxing authority. And that's a legal principle that has not yet been tested in Washington law."

Seattle estimates that the gun tax will raise between $300,000 and $500,000 annually. The money will go gun violence prevention programs and research in order to improve gun safety.

In 2009, the Seattle City Council passed regulations that prohibited the carrying of firearms in city parks. That ordinance that was struck down in 2012 by the state's highest court based on Washington's gun regulation rules.

Federal question, too: As for the Second Amendment argument, the city says it is not taxing gun owners, but rather taxing gun sellers. It's then up to the sellers to decide whether to pass along all or some of the tax to the buyer.

Currently, the federal government, other cities, other states, and at least one county (Cook County, Illinois) impose taxes on firearms without infringing upon or impairing their residents' federal constitutional rights, said the city in a FAQ page it issued regarding the new tax.

"And in light of the success of the firearms industry today, a $25 per firearm tax is not going to affect the sales of firearms," Seattle city officials added.

We'll have to see if Washington's highest court, which no doubt will eventually hear this case, agrees with gun activists again or sides this time with Seattle.