As Greece continues its efforts to get its finances in order, the country still is struggling with tax collection.

Many businesses throughout the Mediterranean nation try to do as much business as possible in cash. The lack of record keeping for cash transactions makes it easier for them to avoid paying tax.

Apparently, though, it's not just sellers of goods at Greek markets who are looking for ways to skirt the country's taxes. A component of a respected cultural institution has come under scrutiny.

Greek officials have launched a tax fraud inquiry into one of the country's most visited archaeological sites after tourists claimed its gift shop was not giving receipts for souvenirs they bought. 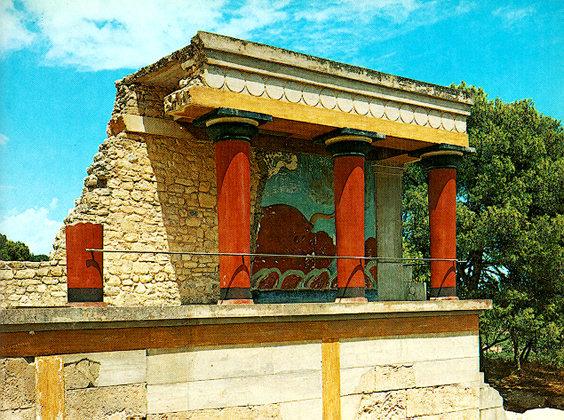 This restored part of the palace at Knossos, which dates from 2,200 B.C., is a favorite tourist site. Photo courtesy Hellenic Ministry of Culture and Sports and the 23rd Ephorate of Prehistoric and Classical Antiquities.

Tax inspectors sent to the world-famous Minoan ruins at Knossos on Crete last week reportedly found 534 breaches of the tax regulations in just one day.

"We await a report from the tax authorities before launching immediate disciplinary action," said Greek Culture Minister Nikos Xydakis, who warned public servants there would be "zero tolerance" of government employees "who fail to defend the interests of the state."

Tax crimes by U.S. officials, too: Sadly, government employees worldwide are not immune from the temptation of tax crimes.

As I noted last week at my other tax blog, a former jailer in Troy, Alabama, now has his own cell thanks to his part in a tax identity theft scheme.

He was sentenced last week to more than two-and-a-half years in federal prison, along with three years probation and more than $13,000 in fines, for his part in a tax scheme.

The former city employee had pleaded guilty earlier to taking advantage of a literally captive source of tax information. He stole prisoner tax identities, then passed the information along to confederates who used the data to file fake federal returns claiming refunds.

The tax toll on travel: Also last week over at Bankrate, I looked at how travel taxes can add up quickly. The post's focus was on domestic travel, but many of the same issues also apply if you're looking at an international trip, say to Greece, perhaps.

I usually post my other tax blog thoughts at Bankrate Taxes Blog on Tuesdays and Thursdays. If you miss them there, check here at the ol' blog over the weekend for highlights and links.