Is Obamacare headed back to the Supreme Court yet again?

Could the U.S. Supreme Court hear yet another Affordable Care Act, or ACA, case? If opponents of Obamacare, as the law is popularly known, have their way, yes. 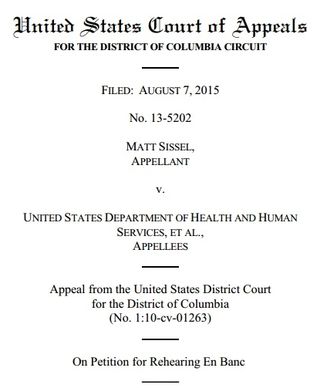 Last Friday, Aug. 7, the judges on the District of Columbia Circuit Court of Appeals declined to hear a suit challenging the legislative process by which the ACA became law.

Sissel v. U.S. Department of Health and Human Services, filed by Pacific Legal Foundation on behalf of Iowa artist Matt Sissel, argued that because the ACA is expected to generate $473 billion in its first 10 years as law, it is a revenue bill that, per the U.S. Constitution, can come only from the House.

But since the health care measure was a product of the Senate, Sissel contended it violated the constitutional Origination Clause, thereby invalidating the law.

Where to begin: The Origination Clause states that "All Bills for raising Revenue shall originate in the House of Representatives; but the Senate may propose or concur with Amendments as on other Bills."

A three-judge panel from the D.C. court had rejected Sissel's claim, ruling that the penalties collected by the Internal Revenue Service from individuals who do not obtain required coverage are not taxes. The money generated by the ACA, said the panel, instead comes from a penalty created to reform the country's health insurance system, not to raise money for general government operations.

Yes, I know that when the Supreme Court first upheld Obamacare back in 2012 Chief Justice John Roberts and four liberal justices deemed that the individual mandate requiring everyone purchase health insurance or pay for not doing do was allowable under the Congress' constitutional power to levy taxes. That was then in another D.C. courtroom; this is now.

In this latest case, seven of the appeals court's 11 judges refused Sissel's request, although some of those who decided against a full hearing agreed that it "is untenable" to disregard the billions connected to the ACA. As the opinion notes, "It is difficult to say with a straight face that a bill raising $473 billion in revenue is not a 'Bill for raising Revenue.'"

All agreed, however, that the core issue of the law's origination technically was met.

Oft-used legislative gimmick: Basically, the court noted what Capitol Hill watchers see all the time when it comes to tax bills. The Senate used a legislative trick that allows revenue bills to comply with the constitutional origination requirements.

Here's what happened with Obamacare:

On October 8, 2009, the House passed H.R. 3590, originally called the Service Members Home Ownership Tax Act of 2009. The Senate then amended that bill, substituting the text of what became the Affordable Care Act for the text that had been passed in the House. It went back to the House, where the revised H.R. 3590, now known as the Affordable Care and Patient Protection Act, eventually was approved and sent to the president for his signature.

Sissel's attorneys argued that the Senate's amendment substituting the ACA language for the House's military homeownership bill was not a lawful amendment under the Origination Clause because it was not "germane to the subject matter of the [House] bill."

But, noted the D.C. court, the "Origination Clause imposes no germaneness requirement on the Senate when it amends revenue-raising bills that originated in the House. That is apparent from the text, history, and precedent of the Origination Clause."

The next legal step: Pacific Legal Foundation (PLF) vows to continue the fight, all the way to the Supreme Court … again.

"Because of the important constitutional issues that our lawsuit deals with, it has always been clear that this case would ultimately have to be appealed to the U.S. Supreme Court," said Timothy Sandefur, principal attorney on the case in a statement issued after the D.C. court's decision. "Therefore, PLF begins work today on a petition for certiorari to the U.S. Supreme Court, and we will be filing it at an appropriate point in the near future."

While the ultimate goal is to get rid of President Obama's signature piece of legislation, Sandefur says the "lawsuit is about the constitutional safeguards and guidelines that must apply to all revenue-raising measures passed by Congress. The Constitution says the people who must pay federal taxes must have a say in their enactment. It gives average Americans a voice by requiring that all new taxes must start in the chamber closest to the people, the House of Representatives. That did not happen with Obamacare."

Sandefur also noted the Supreme Court's 2012 identification of Obamacare's individual mandate as a tax. That means, he said, the law started life in the Senate, through a procedural gimmick.

"We will ask the Supreme Court to uphold the Constitution's taxpayer protections by striking down the individual mandate -- and the rest of Obamacare -- for violating those protections so flagrantly."

If at first you don't succeed…: If the Supreme Court does agree to hear Sissel, it would be the fourth Obamacare issue to come before the country's highest court.

There was the 2012 decision in which the court upheld the ACA, finding that it complies with the Commerce Clause because its revenue is tax income, not fees. Win one for Obamacare.

Then came the High Court's decision that the health care law cannot force company owners to violate their faith and pay for abortifacients. Notch one up for anti-ACA groups.

Most recently, at the end of June, the Court ruled that the tax subsidy provided by all insurance exchanges, whether state or federal, are legal. Big win for the ACA.

Will the fourth time be the charm for Obamacare opponents? Not likely.