IRS gets so-so rating so far on Yelp

"Help" is uttered often during tax season. But with one letter change to that plea, taxpayers will be able to offer some helpful suggestions of their own to the tax collector.

Or so Uncle Sam hopes.

You can rate the Internal Revenue Service on Yelp, the popular online customer review tool.

And yes, it's a real opportunity to offer a critique of how the IRS is or isn't doing its job and suggest ways it could improve.

In a blog post announcing the deal, Yelp noted:

"It's clear Washington is eager to engage with people directly through social media. Earlier this year a group of 46 lawmakers called for the creation of a Yelp for Government in order to boost transparency and accountability, and Representative Ron Kind reiterated this call in a letter last month. Luckily, there's no need to create a new platform now that government agencies can engage directly on Yelp."

Agencies ready for review: Yelp says that thousands of federal agency field offices, national parks, Social Security Administration offices, landmarks and other places are already listed, awaiting comments about user experiences. If things go as planned, some of the user comments will be incorporated by the agencies.

That interactive online exchange was underscored by the General Services Administration, which helps manage and support federal agency operations.

On its DigitalGov website, the GSA lauded the agreement as a way for the federal government to get assessments from "real people giving their honest and personal opinions…. With the addition of Public Services and Government under the Yelp umbrella, agencies can continue to find new ways to use customer insights to improve citizen services."

IRS' "meh" rating: The IRS is among the federal agencies that the GSA hopes will benefit from getting Yelp reviews.

So far, the tax collector's rating is a middlin' 2.5 stars out of a possible 5 stars. 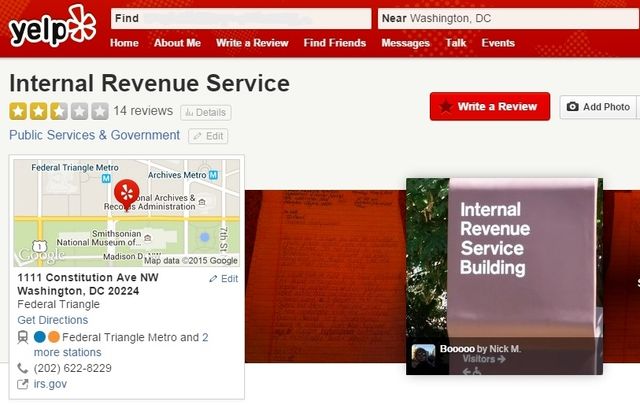 The "Booooo" comment on the Web page photo gives you an idea of what most people think about the tax agency. Click image to go to IRS Yelp review page.

Of course, that so-so rating is based on only 14 reviews so far. More could bump the tax agency's ranking up, or bring it down.

As you might expect, the 1-star rating leads, with five Yelp users selecting the lowest ranking for the IRS.

The 1-star reviewers also were the most succinct in their comments, such as the taxpayer who suggested the IRS "stop taking my money and giving me jack in return, k thx bai."

As for those three 5-star reviews, two of the three top ratings were a bit flip, like the D.C. resident who declared, "The IRS is my charity of choice. It gets 5 stars 'cause I don't wanna get audited."

Dated reviews: Finally, only two of the reviews are from this year.

Apparently the IRS put itself out there for online assessment way back in 2007. Here's the very first review more than eight years ago:

Whaaa??? why must you torment me with your bi-monthly withholding and your year end blood bath.

Dang honestly why...there has to be a better way. Why can't they just withhold a dynamic amount so that at the end of the year....were (sic) all square.

They could just send me a letter with my W2's that essentially says "hey sign this, were (sic) all good"

Hmmm. That sounds a bit like the suggestion that the IRS complete tax returns for some taxpayers.

Maybe the new, official arrangement between Yelp and Uncle Sam will help reinvigorate this pre-filled filing concept and other substantive tax-change suggestions.

Or the IRS could simply end up with a lot of comments that meet the dictionary definition of yelp: a short sharp cry, especially of pain or alarm.