The Republicans who want to sit in the Oval Office in 2017 and beyond are gathered in Cleveland, Ohio, for tonight's first, and I use this term very loosely, debate. 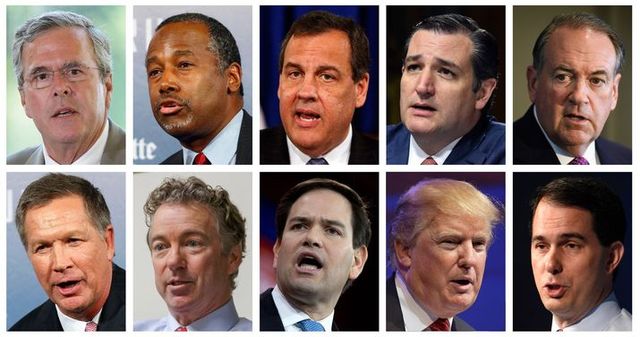 As everyone knows by now, the star of this quasi-reality show being broadcast at 9 p.m. Eastern Time by Fox News is real estate magnate Donald Trump. He's fourth from the left in the bottom row of photos above in case you don't recognized the hair.

Setting the debate (kids') table: Before that motley crew assembles, though, there's an opening act starting at 5 p.m. Eastern Time.

Mark Everson, however, was not invited to be part of either debate. The former Internal Revenue Service Commissioner and first Republican to announce his candidacy this year has filed a formal complaint with the Federal Election Commission in a last-ditch effort to be part of the undercard group.

I suspect, however, Everson will end up watching. And he might have a cocktail in hand to help him get through the political posturing.

Happy Hour debate drinking games: He won't be alone. Taking the edge off could definitely help make viewing more enjoyable. Heck, some of the candidates' remarks might even be more intelligible if heard under the influence.

And some of tonight's imbibers are quite organized. They're taking the happy hour moniker to heart for the main event and getting together with friends to watch and take part in debate-related drinking games.

This is the type of viewer participation (beyond yelling at the TV) where you knock back a shot or two every time one of the candidates utters a certain word.

Whether you plan to watch the one or both debates, here are some drinking games you can play.

Toasting Trump: The Sun-Times Network, the online offshoot of the Chicago newspaper, devised a drinking game that focuses on Trump. Take a drink each time The Donald calls someone a "dummy" or "loser" or reminds us how rich he is.

You also can quench your thirst when he gives out someone's phone number or mentions potential Trump Cabinet member Sarah Palin. You probably don't have to worry about the game's call for a drink when Trump offers a specific, bona fide policy plan for, well, anything.

Unique words for each candidate: The appropriately named DebateDrinking.com has devised a game in which each candidate has a few words unique to him; yes, just him since this game is set up just for the main debate. There also are three community words.

You select a candidate (and, no, everyone in your group cannot pick The Donald), listen for his words on the list and then take a drink when you hear one. They are:

Any time any candidate says a community word -- for this debate they are Obama, Iran and Reagan -- everyone drinks.

Tiered toasting: Reverb Press has a tiered drinking game. You take one swallow for certain words, for example, Obamacare or Iran, from any candidate. Two drinks are required for another group of words, including disparaging remarks about marriage equality and complaints about taxes.

Three drinks must be taken for mentions of, among other things, Ronald Reagan, candidates picking themselves up by their bootstraps or "Real America." And you chug what's left in your glass when a candidate, for example, confuses socialism, fascism, and/or communism in any combination or mentions Obama's birth certificate.

Mexican beers on tap: Finally, from Cloture Club we have a drinking game that suggests some south of the border brands for certain possible GOP debate proclamations.

"Slam a Tecate, Dos Equis, or Corona anytime a candidate refers to how much he loves Hispanic Americans," suggests the game, with a bonus drink to friend if you finish and say "ay dios mio."

The website, which was created by two former Senate staffers as a repository for information that appeals to Capitol Hill habitués and Washington, D.C., residents, even created a PDF (pictured below) you can download to keep track of your drinking directions. 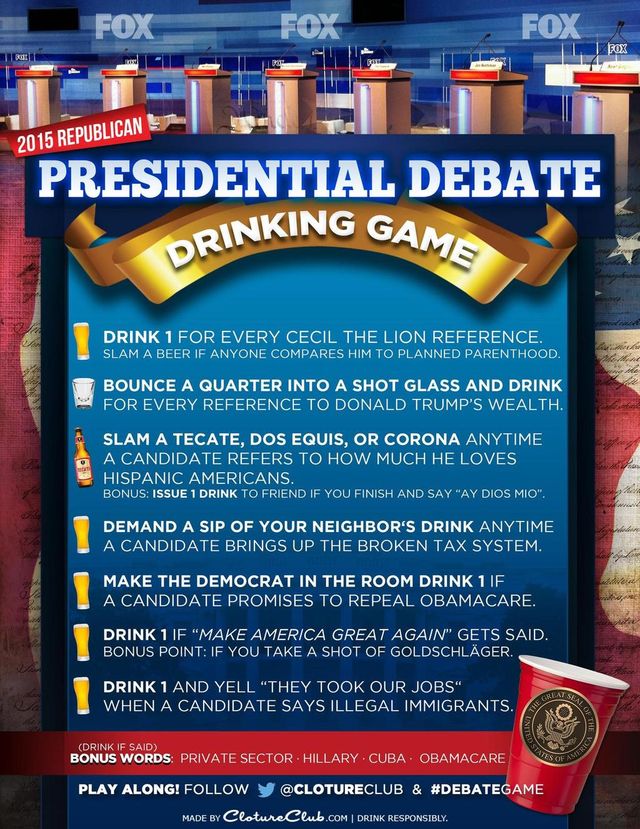 The national capital group also welcomes drinking debate watchers to join @ClotureClub on Twitter tonight in calling out their drinks with the #DEBATEgame hashtag.

And one more from Letters From Texas, even though the Lone Star State's former gov is relegated to the JV gathering.

Now all that's left is to decide where you'll watch the debate(s), pick up enough adult beverages to get you through one or both of the events and if it's not at your house, make sure you have a couch to crash on or a designated driver!