IRS says free identity theft protection services are tax-free
That's very good news for me, since I was part of the huge OPM hack

Earlier this year when the Internal Revenue Service revealed that its online Get Transcript tool was hacked, I joked that that the hubby and I didn't have to worry. Since we never get a tax refund, there's no way that identity thieves would want our personal tax data.

Now the joke's on me. 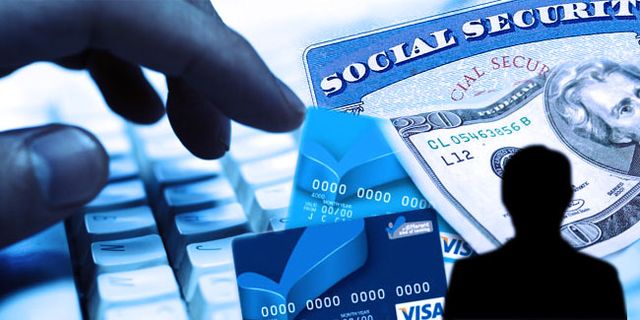 No, I haven't become an identity theft victim again. I say again because it happened on a thankfully small scale many years ago.

But my personal data was exposed during the massive Office of Personnel Management (OPM) hack.

My federal employee years: Long-time readers know that while I'm a native Texan, I was a Texpatriate in the nation's capital for almost two decades.

When we moved to Washington, D.C., back in the early '80s, I got a job with a U.S. Representative. Years later, I went with the Congressman when he was elected to the Senate. Then I came back to the House side to work as a staffer with the tax-writing Ways and Means Committee.

After about a decade of government employment, I moved to the private sector, joking that I was shifting gears from helping lawmakers write tax laws to lobbying them for changes in those laws.

So aside from what my D.C. experience still brings to my writing about taxes, I never expected my long-ago years on Capitol Hill as a federal employee to affect my current life, especially since I had rolled my government thrift savings plan, Uncle Sam's version of a 401(k), into an IRA.

Those were fun and educational years, but mostly just good memories.

You've been hacked: Then the letter from the OPM arrived. 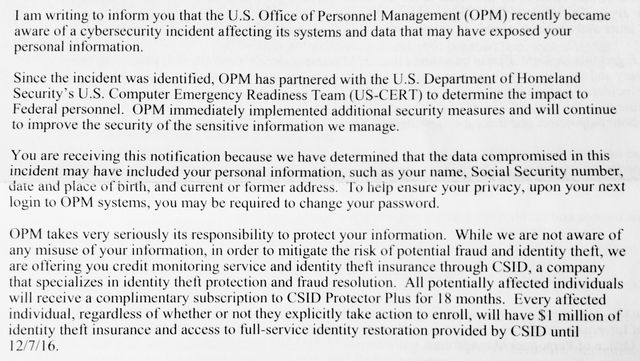 I know that the excerpt pictured above is a bit hard to read, so I'll spell out the salient section:

"You are receiving this notification because we have determined that the data compromised in this incident may have included your personal information, such as your name, Social Security number, date and place of birth and current or former address."

I immediately put a fraud alert on my accounts with the credit reporting bureaus. Then I downloaded copies of my credit reports.

The good news is that I've not gotten any alerts from the credit bureaus and, as the CSID plan notes in my check of it today (shown below), I'm still clear. Fingers and toes remaining tightly crossed.

One thing I didn't do, however, was consider that the ID theft protection provided to me by OPM might be taxable income.

Now I know that there is not very much that escapes the IRS. But even though I follow taxes for a living, I never considered that I might have to pay taxes on the value of the CSID fraud protection.

I'm no longer a federal employee, so it's not a benefit provided to me as a worker. And I certainly don't consider the ID protection a taxable prize I won for possibly being a victim of one of the most hassle-inducing crimes ever.

Growing, costly ID theft: I am not alone, in either being a victim or potential victim and the recipient of free fraud protection.

Identity theft has been the number one consumer complaint to the Federal Trade Commission for 15 consecutive years. The subcategory of tax-related ID theft is moving up the FTC list, too.

The U.S. Bureau of Justice Statistics estimates that 16.6 million people were victims of identity theft in 2012, the latest year for which data is available.

And it has become a common practice for companies, employers and government agencies to try to help out folks who became victims due to breaches of those groups' security.

The typical response, as in the OPM's case, is to provide affected individuals with credit reporting and monitoring services, along with identity theft insurance policies, identity restoration services, or other similar identity protection services.

While the services are free to those whose info was exposed, it costs those paying for it billions.

In light of the number of victims and dollars involved, it's no surprise that, unlike me, the IRS did stop to think about the possible tax implications.

That means we don't have to worry about adding the value of the services we've been given to our gross income amount on our 1040s.

The IRS issued the good news yesterday (Aug. 13) in its formal Announcement 2015-22, noting that it applies to anyone -- customers, employees, former employees and anybody else -- whose personal information may have been compromised in a data breach.

On the employer's or other ID protection provider's side, the IRS says they do not have to include the identity fraud services' values on information returns to the victims. This means it won't show up on any W-2 forms for employees or 1099-MISC forms sent to other individuals.

But, and you know there's always a "but" when it comes to taxes, the IRS says the tax-free status does not apply to cash payments you might get as settlement for a data breach.

Similarly, identity protection services that are part of a compensation/benefits package remain taxable, as do proceeds from an identity theft insurance policy.

For those of us, though, who find our information was exposed through no fault of our own and who are given a service to help us cope with the potential ID theft ramifications, there are no tax matters to worry about.

That's very good news, since we have plenty to occupy our minds what with our personal data floating around out there.

Elmer, I hope that means that your data wasn't compromised. You still can check your credit reports for free just to be sure. Kay

Glad you heard from OPM. I retired from the IRS earlier this year. They haven't said boo to me about the hack.