Still waiting for tax extenders. Is money the holdup?

Oh, Congress. If we were dating, our relationship would be in Ashley Madison level trouble.

The bad is that you are so predictable. Same old, same old political demagoguing and no action. Worse, all that talking plays into your tendency to procrastinate, which is incredibly annoying. Worst, your dilly-dallying is really messing up my and millions of other taxpayers' tax planning. 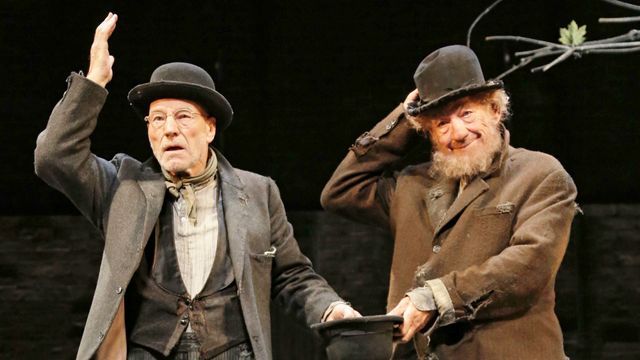 Sir Patrick Stewart (left) and Sir Ian McKellen (right), two lions of British theater, teamed up in 2013 for a Broadway production of "Waiting for Godot."

Waiting (again) for tax extenders: I am, of course, talking about the tax extenders. This group of more than 50 tax breaks for businesses and individuals expired on Jan. 1.

With each passing day, we U.S. taxpayers live our own version of Samuel Beckett's absurdist play "Waiting for Godot." Like the play's two main characters who wait endlessly and in vain for the arrival of someone named Godot, we wait, every year or so, for tax extenders to be renewed.

We've gone nearly eight months now without knowing for sure whether we'll be able to claim state and local sales taxes or take the tuition and fees deduction or just how much in 179 expensing our businesses can claim.

There's more on the extenders, including the cost breakdown for some of the more popular individual tax breaks, in the latest Weekly Tax Tip about all these tax laws that are dead until Congress revives them.

You'd think we'd be used to such uncertainty by now. And we are. Sorta. But that doesn't make it any less frustrating.

And it's a problem for the Internal Revenue Service, too, which means it's ultimately our problem. If Representatives and Senators push off extenders until December again, we could be looking at a delayed tax filing season again.

See? Predictable, and not in a good way.

Show Congress the money: The problem isn't really with the tax extenders themselves. Most members of Congress support passage of most of the laws.

Some, primarily in the House, even want to break the waiting pattern and make some of the tax breaks permanent.

That approach runs into a couple of roadblocks.

First, there's the cost. Extenders generally are passed without worrying about how to pay for them since, so the reasoning (word used loosely) is that they're temporary. But if they're made a permanent part of the Internal Revenue Code, folks want to run the numbers.

Some folks, however, believe that another dollar source is even more important when it comes to the extenders.

Tax policy and campaign money: The real reason Congress hasn't put an end to the madness that is perpetually expiring tax breaks is, according to a Harvard professor, is because the extenders are too valuable politically.

Lawrence Lessig, who's toying with running for president (why not; everybody else seems to be), argues that politicians essentially sell year-to-year extensions of tax policy to donors.

He thinks that lawmakers and lobbyists exist in a symbiotic relationship designed to shake down rich individuals and companies. Basically, Lessig is saying that each year Congress pretends it might not renew extenders in order to build support, which he says is just a euphemism for cash.

"Think about the R&D tax credit, which has been a 'temporary' provision in the tax code since 1981," wrote Lessig in a July article for The Daily Beast. "Each time the credit is about to expire, Congress rallies support to renew the tax break from those who benefit from it. 'Support' means campaign contributions."

His position is laid out in his book, "Republic, Lost: How Money Corrupts Congress and a Plan to Stop It."

Voters guide tax laws: Another law professor, however, thinks Lessig has it all wrong.

Brad Smith, a professor at Capital City University and the Center for Competitive Politics, told Tax Analysts that Lessig's focus on campaign money oversimplifies the myriad factors that influence lawmakers' tax and other decisions.

Smith, who also previously served on the Federal Election Commission, says the tax code has grown more convoluted since 1986's major tax reform because members of Congress have championed proposals they thought would win them support at the ballot box.

End the waiting, now: Whatever is the guiding force behind the persistent holding pattern the extenders are in, it's ludicrous. And it needs to stop.

If the tax laws are renewed, great. Do it so we have appropriate time to take advantage of them.

But even if they are left for dead, then we need to know that, too, so we can make alternate tax plans.

Either way, Congress needs to do something soon so that we all can quit waiting for extenders and get on with our tax lives.