Donald Trump has yet to release his tax reform plan, but he dropped a hint during an interview with CBS News on Sunday morning.

"The hedge fund guys are getting away with murder. They're making a tremendous amount of money. They have to pay taxes. I want to lower the rates for the middle class. The middle class is the one, they're getting absolutely destroyed. This country doesn't have, won't have a middle class very soon," Trump told Face the Nation.

I don't agree with much of what Donald Trump says, either in his personal, TV or political life. But there's a first time for everything. He's right about hedge fund managers. 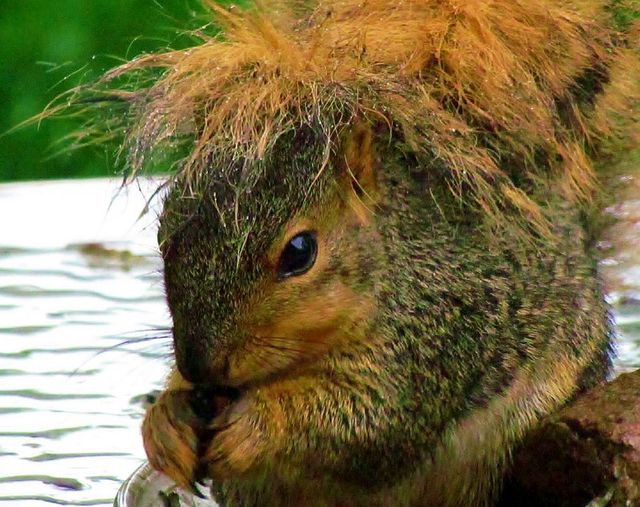 Look familiar? Squirrel comb over posted by Greyelf at WunderPhotos.

As we say here in Texas, even a blind squirrel finds a nut now and then.

Carried interest continuing controversy: What Trump is talking about is the tax code provision known as the carried interest loophole. This allows private equity and hedge fund managers pay taxes on their earnings at the lower capital gains rate instead of the ordinary income rate.

For higher-income individuals, the top ordinary income tax rate now is 39.6 percent, but these folks face capital gains tax of only 20 percent. For the rest of us average Joes and Janes, the capital gains rate is 15 percent.

This is not a new tax conversation.

Carried interest got wider popular attention in 2008 when University of San Diego tax law professor Victor Fleischer wrote about "this quirk in the tax law [that] allows some of the richest workers in the country to pay tax on their labor income at a low rate."

Back in 2010 when Congress was struggling to renew (as it regularly does) the expired tax extenders, the process was slowed even more by an effort to change the tax treatment of carried interest payments. Some lawmakers wanted to tax it as 50 percent ordinary income and 50 percent capital gains for a couple years, then up the higher ordinary tax rate to 75 percent. That change failed.

Then came the 2012 presidential campaign. Republican nominee Mitt Romney, who made much of his billions via the private equity group Bain Capital, revealed his tax rate was around 15 percent. That was the maximum capital gains rate back then that applied to carried interest payments.

And here we are in 2015, still talking about the various income levels of Americans and the many taxes on different types of compensation.

Crossing political borders: The Donald's tax talk is sounding suspiciously unRepublican. But even some in the GOP have suggested this tax law needs at least to be considered as part of tax reform.

And tRump, as I like to call him, doesn't have to worry (yet) about alienating wealthy political action committee donors.

So he's saying, on CBS and in an earlier Time magazine interview, that he wants to "switch taxes around" because "I have hedge fund guys that are making a lot of money that aren't paying anything."

"They're paying nothing and it's ridiculous. I want to save the middle class," according to Trump. "The hedge fund guys didn't build this country. These are guys that shift paper around and they get lucky."

And he vows that although he and the Wall Street money managers are all rich -- but Trump's fortune is bigger, it's huge! -- he will change tax laws and lower rates for the middle class.

"Some of them are friends of mine, some of them I couldn't care less about. It's the wrong thing," says Trump.

For once, I hope more people are paying attention to what wannabe President Trump is saying.